Congratulations to young Haydn Sewell who came home victorious from the 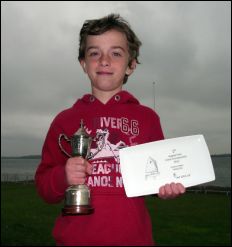 Isle of Wight sailor Haydn Sewell became the 2012 Volvo Gill Optimist Inland Regatta fleet Champion at the weekend with a dominating display of sailing at the national event.

Held over two days at Grafham Water, 74 young sailors from all over the country competed in the eleven race event with the Royal Victoria Yacht Club sailor taking a hard fought but comfortable 18 point championship victory.

Three straight wins
Right from the off, Haydn showed his fellow competitors that he meant business by taking three straight wins in the first three races of the Championship to open up a commanding lead.

The light wind conditions suited Haydn and with his boat having been race prepared by David Heritage Racing Yachts and with a new North Sail, Haydn was proving to be one of the quickest sailors on the water.

Further race win
On Saturday afternoon Haydn added a further race win and a sixth and fourth place to finish off the day at the head of the leader board with a 12 point advantage.

Sunday brought with it much stronger wind to Grafham water reservoir and more testing conditions for the lightweight nine year old who knew he would have to be at his best to keep hold of his lead. This he did in style demonstrating his skill in sailing in all conditions to score two seconds and a third in Sunday morning’s racing, notching up an unbeatable lead in the process.

For mad keen sailor Haydn though, this was never an option and he went out in the afternoon to win the Championships in style with another fourth place and a further race win to make it five firsts out of eleven races.

Haydn’s journey to Grafham was kindly supported by Wightlink Ferries.