Some people in Freshwater aren’t happy about the proposed development of Hazelhurst. Listen to their views. 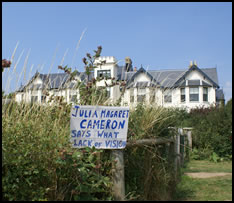 As we reported on Monday, twenty or so local residents gathered opposite the Hazelhurst property in Freshwater to show their objection to the Ombudsman, as he made a site visit.

After waiting for some time for the architect to turn up, the Ombudsman came and spoke to the residents to advise that he would be carrying out a site visit. He stated that he had read all objections to the application and would be taking those into account.

There were many placards being held by those expressing their concerns, which were noticed by those carrying out the site visit, as well as passers-by on foot, bus and car – to which the residents received many ‘hoots’ of support.

Residents and Visitors Say No! How Awful 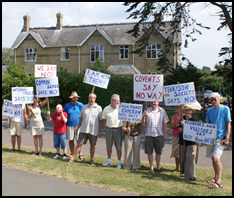 We chatted to some of those protesting to find out what message they were hoping to send to the Ombudsman.

The comments ranged from concerns relating to the pair of semi-detached houses proposed to be built alongside the property after demolition, to ensuring that the heritage of the Tennyson Mile to retained by avoiding the demolition of the building that had been part of the fabric of the area since 1871.

Listen for yourself to the passionate views of local residents.
[audio:http://otw-audio.s3.amazonaws.com/haslehurst-silent-protest.mp3]

newest oldest most voted
doug
I grew up just down the road from this house and am following this story with interest. A comment was made in the ‘listen for yourself’ audio clip above suggesting that the house used to have double floor windows and a long glass veranda, lost to WW2 bomb damage. Surely this suggests that this property used to be far more grand than it is now? One can… Read more »
Vote Up00Vote Down