Man tried to ‘sail’ to the Isle of Wight on this raft: ‘Lucky to be alive’

Using a parasol as a sail, after tying a handful of items together – including a door – with washing line to make a raft, man risks his life in attempted journey to Alum Bay from the Mainland. 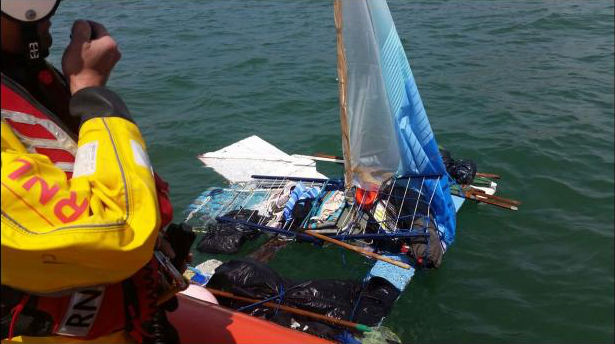 A man tied together a wooden door, a broom, a clothes airer and three polystyrene body boards with washing line and attempted to sail to Alum Bay, on the Isle of Wight yesterday.

The 33-year old, who was described as ‘lucky to be alive’, was rescued by the RNLI Mudeford lifeboat from Christchurch, Dorset, after getting just 600ft from the beach in Milford-on-Sea where he set off from, before the cobbled-together craft broke up.

Clinging on for 40 minutes
Colin Tabor, from Lymington Coastguard told the Daily Echo,

“He is a very lucky to be alive – he would not have lasted much longer.”

He was treated for shock and hypothermia when we was returned to the shore by his rescuers. He was wearing a T-shirt and shorts, and had no lifejacket, flares or radio.

He’d used a parasol as a temporary sail and had brought along a lantern and a bag of tea lights to use as a navigational aid.

Heading to sea? Be prepared
In a message to any budding adventurers, the Coastguard said

“Our message is that anyone going out on the sea must be prepared – wear the appropriate protective clothing and a lifejacket, take flares for use in an emergency and always carry a radio.”

Image: © Used with the kind permission of RNLI Mudeford

17 Comments on "Man tried to ‘sail’ to the Isle of Wight on this raft: ‘Lucky to be alive’"

Oh dear, this would be funny if it wasn’t so serious. We have considered more economical ways of getting to/from the Island than the exorbitant ferry charges but even we haven’t thought of that! Just wondered; if there was a fixed link, would this chap have tried to cross in a pedal car? We are saving for our next visit.

That is what it costs to launch an all-weather boat.

This the “idiots afloat” time of year who don’t understand the dangers of the sea and rely on the charitable efforts of volunteers to rescue them from their foolhardiness.

Vote Up00Vote Down
Victor Meldrew
Mudeford is a B class ILB crewed, as the majority of RNLI lifeboats, by volunteer crew. In 2014 they launched 81 times. If you divide total income of c £14500 by 81 it works at around £1800 a launch and not the £6000 you assert. All lifeboats RNLI and Independent are proud of their enviable record of not requiring payment for their services. As an indication during… Read more »
Vote Up00Vote Down
Cicero

…. long-term members of our local RNLI Guild must have it wrong then? (On the other hand perhaps ALBs are more expensive to launch, recover and run than RIB’s?)

RNLI Plymouth “The average cost of launching is estimated at £5,800 for the All Weather Lifeboat and £2,200 for the Inshore Lifeboat.”

So the £1800 for an ILB launch and £6000 for an ALB launch appear to be reasonably correct estimates.

…hope this puts the record straight! :-))

What an absolute idiot!
Let’s be thankful that his actions didn’t cost the life of genuine sailors or bathers who were actually in need of the RNLI craft whilst he was carrying out his ridiculous stunt!

Vote Up00Vote Down
The Sciolist
Sorry, an idiot he may be, but he has a right to do what he likes, he was only endangering himself, no-one esle. The RNLI can certainly afford a launch, and if the crew don’t like it they could step down. They are not the police, although you could easily believe they would like to be the sea police, based on some of the OTT statements they… Read more »
Vote Up00Vote Down
Cicero
Presumably you also support the freedom of people to go ill-equipped up mountains and then have to rely on local volunteer mountain rescue teams to rescue them from the often life-threatening messes they get into? If people want to do things that could turn out hazardous they need to take personal responsibility for ensuring that they have right equipment to survive when things go wrong. The sea… Read more »
Vote Up00Vote Down
Caconym

This is nothing to do with the “health and safety brigade”.

This is someone not taking responsibility for his own actions.

Vote Up00Vote Down
Old Knobby
So, you’ve got your door, your body boards and your clothes airer, but something’s missing. What could it be? I know, a broom will finish it off! How could you ever consider sailing across the Solent without a broom? Didn’t someone attempt to row across in a hollowed out giant pumpkin a few years ago? I think it was for charity, but I’m sure he’d have had… Read more »
Vote Up00Vote Down
Mark Francis
Every year several people drown at the seaside & they are almost always people who do not come from the area- usually inland. I grew up with dire warnings from my mother about which parts of the coast (mostly Culver Cliff) that I should never go to & an instinctive knowledge of tides, which are probably pretty strong at the entrance to the Solent. Still, if people… Read more »
Vote Up00Vote Down
Mr Einsteins Ghost

Q:Was he an irresponsible p***?
A:Yes

Q:Has it amused many people including – possibly – some of those involved in the rescue?
A:Yes. Bl**dy hilarious!

I must say I am delighted that so many people agree with me. It gives me hope that a majority in this country are still blessed with a modicum of common sense. Thank you!

Common sense? Have you got a method statement and a risk assessment for that?

I am also delighted when anyone agrees with me – on any subject whatsoever and this too gives me hope that at least a minority of people in the World in general are still blessed with modicums (modica?)of common sense.