We speak to the person running the investigation

VentnorBlog went down to the site, near Stag Lane, where the search for Damien Nettles is taking place following the arrest of five people earlier in the week. 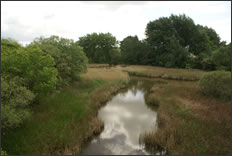 Trained underwater search officers were carrying out what was described as, “A systematic inch-by-inch search of the marsh and the woodland around it.”

Interview with DCI
We chatted to Detective Chief Inspector David Powell about the search and recent investigation – “We’ve been following up some new leads, some new information, about the last 12 months – as a result of that, we’ve made the arrested that we made the day before yesterday. That has led us to the marsh land. This is what we need to search – to establish 100%, is Damien here?”, he told VB.

He went on to say, “We’ve received information over the last 12-18 months. That information leads us to believe that Damien was killed and that his body was disposed of here.”

A change of loyalties may have led to new information
We told DCI Powell that when we’d heard four of those arrested were from the Island we almost found it beyond belief, as the community on the Island is so tight and that those involved would’ve had to keep the information to themselves for over fourteen years. He replied, “People deal with information in lots of different ways,” going on to say, “Sometimes people’s loyalties change over the years, in terms of relationships – dynamics with friends and family.”

Photos
We have photos of the search, but felt uneasy about using them and after reading some comments by VentnorBlog readers, we’ve decided to show a photo of the surrounding area instead.

newest oldest most voted
Bookfan
Every time the name Damien Nettles comes up, my heart breaks. I never knew the family but think of them often and feel overwhelming sadness. Being a mum myself of lads around the same age I can understand how devastating it would be to have one go missing. Whatever has happened to Damien I hope the perpetrators get the book thrown at them. To keep quiet for… Read more »
Vote Up00Vote Down
Dale
Well done Ventnorblog for the sensitive handling of this very sad and puzzling case. Thank you in particular for the illuminating police interview -to me it does seem extraordinary that there could have been information about what happened that winter night held within our community all this time. Thank you too for not posting photos. I am sure we are all thinking of that poor boy and… Read more »
Vote Up00Vote Down
Mrs James