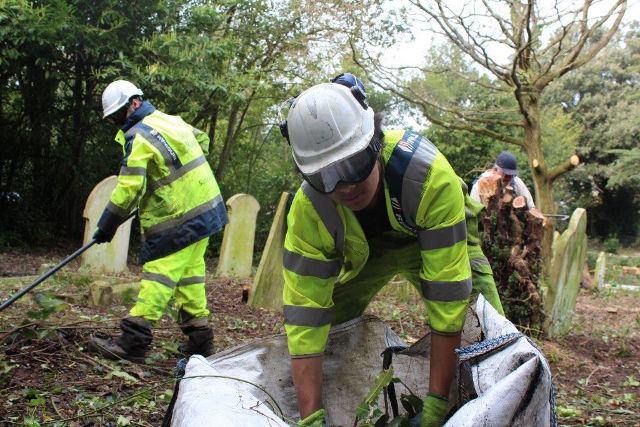 This in from Island Roads, in their own words, Ed

A dedicated group of volunteers were delighted when staff from Island Roads arrived to boost efforts to bring back into use heavily overgrown parts of Northwood Cemetery.

Under the company’s volunteering programme, five Island Roads staff joined Friends of Northwood Cemetery trustees Jon Matthews and Richard Day for a day of hedge trimming and removing the dense vegetation that had left an area of the cemetery inaccessible.

Trustees were left thrilled with the contribution of Island Roads in improving the cemetery, the second largest on the Island and the first municipal burial site in the county.

“With the employee support, the tools and vehicle supplied by Island Roads, I think we will have done in just one day what it might otherwise have taken six months to achieve.

“Those of us who usually do this work are in the 50-to 70-plus age range so to have all this extra help is an absolute godsend.”

Jon, Chairman of the Friends of Northwood Cemetery, added:

“Councillor Lora Peacey-Wilcox, who is a supporter of our work and the IW Council member for Cowes Medina, lives nearby and knew about Island Roads’ volunteering scheme and how helpful this could be. We spoke to Island Roads and were delighted they were able to help us out.

“The work that has been done today has exposed many graves that had become inaccessible for many years. Now cleared, we will be able to manage it back into an open grassed area with bushes and trees that are controlled. It is back looking like a cemetery should.”

“A couple of us are from Cowes so we know how much of an important part of the town’s heritage this cemetery is. It was really rewarding to be able to work with such passionate people as Richard and Jon to bring this area of the cemetery back into use for the local community.

“It was also good to get involved in work that is different to the job I usually do.”

“It must be frustrating for those who use and care for the cemetery to see it become overgrown so we were delighted to be able to play a part alongside Richard and Jon to help bring an area back into use.”

If you have a project or scheme that you would like to put forward for consideration under the company’s volunteering scheme get in touch with Island Roads on 01983 822440.

2 Comments on "Island Roads staff help out at Northwood Cemetery"

newest oldest most voted
RJC
I would call it vandalism, I have noticed the way trees and big shrubs are being hacked down to nothing, the place should be a conservation area. The diversity of wildlife is amazing if you sit quietly for a while you will see animals and birds that are to shy to come into your garden. The squirrel’s highways are disappearing as the place is ‘tidied’ The nesting… Read more »
Vote Up00Vote Down
tiki
Personally there has been too much tree/ shrub clearance in Northwood Cemetery. The man who calls himself the preservation manager told my friend squirrels don’t need trees (after she complained about the destruction of trees and shrubs). Who supervises these cemetery groups? Do they have training? Do they have proper drawn up conservation plans? They seem to have carte blanche to do what they like. Who are… Read more »
Vote Up00Vote Down