Incompetence or a total disregard for others? It’s hard to tell, as Island Roads replaces a bench and faces it away from the view and on a massive wonk! 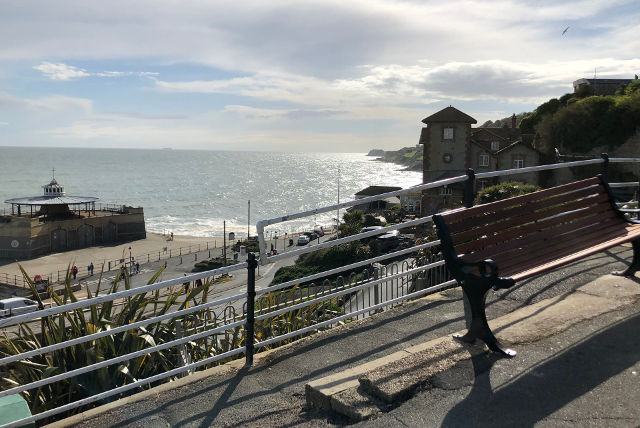 It’s not often we run opinion articles by ourselves (the editors), but after seeing this piece of work by Island Roads with our own eyes today, it just wouldn’t have been possible to share the news any other way. Ed

First the residents of Bonchurch were treated to a new novelty ride courtesy of Island Roads.

Now just a couple of years later, visitors to Ventnor can forget about enjoying one of the greatest views of the Isle of Wight coastline – someone at Island Roads has decided otherwise.

Instead they seem to believe that anyone taking a rest at the top of Ventnor Cascade should sit and look at the passing traffic instead.

Where’s the view gone?
Yes folks, this is not a wind up, these are real photographs taken today (Thursday).

Here’s the view enjoyed by millions over the last century before the bench was replaced (swap the pumping station for the pier which burnt down in 1985).

Isn’t it glorious! The winding Cascade (ready and waiting to be planted up with colourful blooms), the lapping waves against the beach and of course, the stunning coastline.

Oh!
Here’s what you now see sitting in the same location.

Don’t get us wrong, those are some beautiful Victorian villas you see there, but surely the point of the bench at the top of the Cascade is to look out to sea?

On a wonk
Not only has it been positioned 180 degrees from the stunning view, but the bench has (as happened in Bonchurch) been fitted on a most ridiculous angle (see the horizon for reference).

We’re struggling to get our heads around why they would have done this, but if we’re being kind, perhaps the person fitting the bench just wants people to get to know each other better.

A laughing stock
As we arrived to take a look at the much-talked about bench (word spreads fast in Ventnor), holidaymakers were pointing and laughing at it.

Sadly those people probably have no idea that it was the fault of the the highways PFI contractor. They’re more than likely to have left the town believing it was down to the Ventnor council.

Laughing aside, it’s hard to work out whether this balls-up was down to incompetence or just a total disregard for others.

Human error
OnTheWight asked how this could have happened and on Friday afternoon a spokesperson on behalf of Island Roads said,

Unfortunately, the bench was incorrectly sited due to human error. We apologise for this and have today re-installed the bench correctly.

Novelty ride no more
By the way, if you missed our article about the novelty ride in Bonchurch from Christmas 2016, here’s the video below.

May the IWC told them to turn it around so people can’t see the overflowing bins down on the seafront!

Jay is probably lining up a week at the Hambrough so he can consult on a resolution to the problem.

Looks like it’s been done by ‘apprentices’ with no supervision. Did someone actually get paid for this ineptitude?

Vote Up200Vote Down
Womble Wendy
Just to say that the overflowing bins along the seafront and paddling pool area over the Easter Weekend (Good Friday to Easter Monday) were emptied every evening starting at 6pm by Ventnor Wombles, Ventnor Town Council and Ace Waste. Ventnor Wombles and Ace Waste took no payment and the only cost was for the disposal of the rubbish. There are 14 bins between the paddling pool area… Read more »
Vote Up21-3Vote Down
happycloud

that’s a great thing that you are doing but it’ll just confirm to the IWC that there isn’t a waste issue with overflowing bins…… stuck between a rock and hard place and I absolutely understand why you did it but they will justify the decision to stop emptying bins and push on with less and less…….

Given the ridiculous angle no one is going to use it, so it really doesn’t matter which way around it is.

Could this be the concrete evidence to support the widely held belief that island in-breeding really does result in some bizarre thinking and decision making?

Could this be symbolic of an inward- looking council?

Island Roads previously caused severe flooding to houses in Brading after they dumped excess tarmac down a road drain, causing it to inevitably block up. It caused a lot of damage & inconvenience to the households concerned. The fact that Island Roads were allowed to keep the servicing contracts despite their illegal dumping of toxic waste speaks for itself, I would suggest.

Has it been turned around so that urbanites don’t feel out of their comfort zone, or is it for car spotters ?

The angle (as in Bonchurch), is so the rain runs off.