Anti-oil drilling campaigners on the Isle of Wight received national support during an online meeting last night, with advice and encouragement from successful challenges against fossil fuel exploration in the North of England 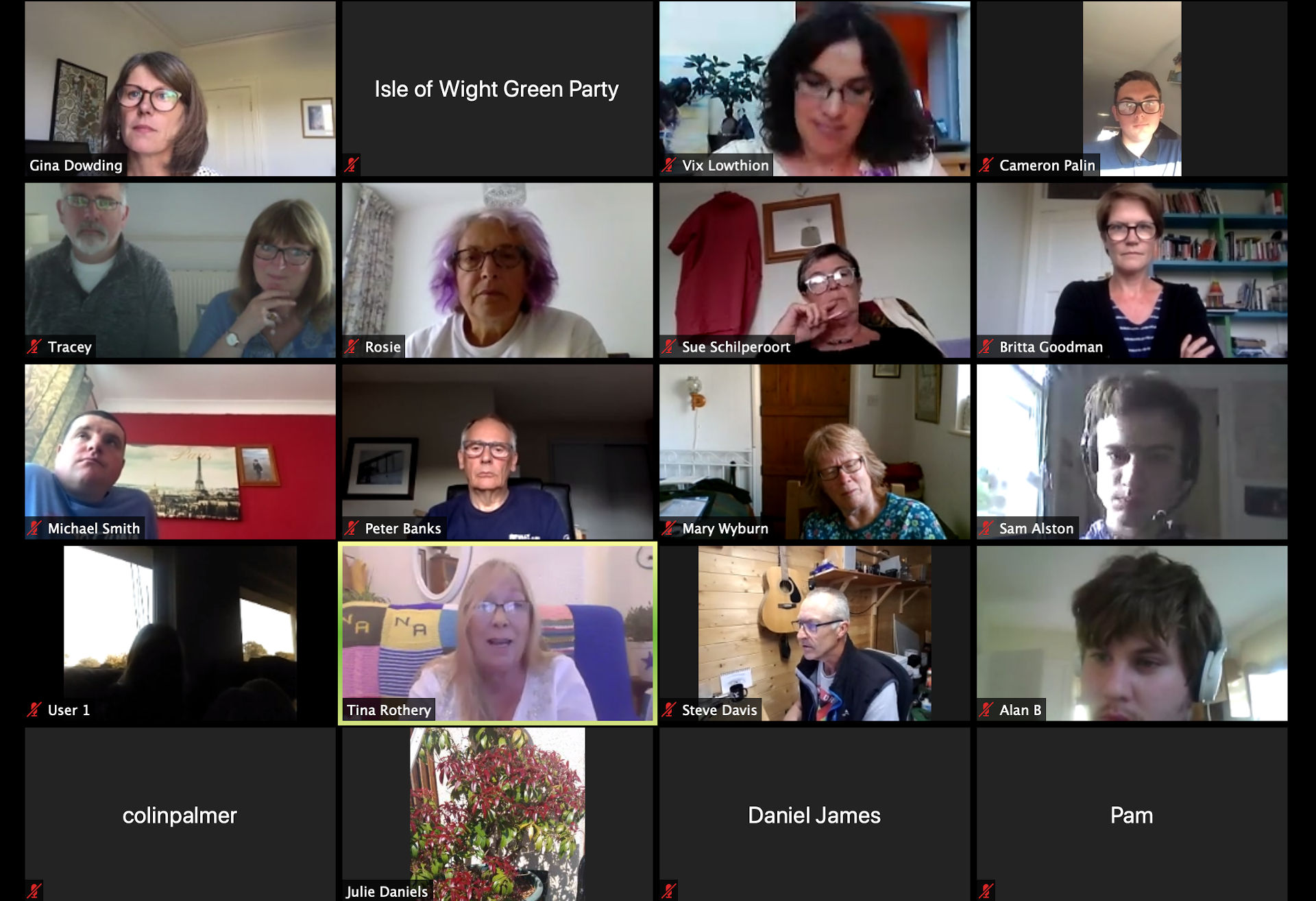 Anti oil-drilling campaigners on the Isle of Wight gathered online last night (Tuesday) to hear advice and encouragement from successful challenges against fossil fuel exploration in the North of England.

She identified the ‘spin’ which oil companies demonstrate in planning applications to hide their real intentions for their activities on the site, and how important it is to remain positive, creative and human.

“The companies underestimate the intellect and determination of people when they are defending the most important things in their life: their families, home, community and the environment they depend on. My purpose is to save my grandchild – it was not my intention to be a radical activist.”

Rothery: We have to see through the spin these companies will use
Tina stressed that protesters will get involved at different levels from petitions to direct action, and told the story of a driver who honked a horn in support of the protest who was then threatened with arrest by a police officer, and so arranged a 100 strong convoy of beeping vehicles to make his point.

“We have to see through the spin these companies will use.”

Dowding: Lobbying councillors, working together and keeping spirits up
Gina Dowding, Green Party Lancashire County Councillor and Former MEP, explored the role that councils can play in stopping oil drilling, as well as stories of peaceful protest at the exploration sites.

She stressed that lobbying councillors, working together and keeping spirits up are really important. In Lancashire, whilst the County Council refused the planning application to drill, the local community were overruled by the national government who pushed the drilling through.

“We were always talking about a lack of democracy and who was in control. Many councillors were very concerned about the lack of transparency, and joined the campaign to fight the attack on our democracy.”

Lowthion: It isn’t too late to submit your objection
Vix Lowthion, the IW Green Party spokesperson, said after the meeting,

“It is so important that as many people as possible take part in this public consultation on potential drilling for oil outside of Arreton on the Isle of Wight.

“It isn’t too late to submit your objection via email or Website, but we also must prepare for the coming months and years ahead if this application is approved.

“The Isle of Wight Green Party are committed to protecting our countryside and keeping fossil fuels in the ground. Instead we must invest in clean and renewable sources of energy such as solar, tidal and offshore wind.”

The deadline for objections to the planning application is this Friday, 24th July. More information can be found at Don’t Drill the Wight Website.

newest oldest most voted
northsylvania
Seems like more energy is being expended denigrating Green party activism than working to keep our Island’s countryside secure for future generations to enjoy. Our Tory MP has written an objection as have people all across the political spectrum. We welcome allies from every party and every walk of life. Members of Don’t Drill the Wight may not share a political party, but we do agree that… Read more »
Vote Up23-1Vote Down
lauque

It would have been nice if our Tory MP had supported the NHS, food standards and animal welfare standards in the vote on Monday, but he was never going to, was he?

The credibility of this campaign is completely undermined by the involvement of Vix Lowthion who for many years was the partner of a mining billionaire. She has never publicly, to my knowledge, distanced herself from Xannat’s environment shredding activities.

This is NOT a party political campaign, fedupbritain. Vix Lowthian is not a committee member of Frack Free Isle of Wight and never has been. This campaign transcends party politics. Oil fields threatens the Island’s economy that depends on tourism and farming. It threatens our drinking water supply, our clean air. It threatens our wildlife. And most of all, it threatens humans’ very survival on this planet.

Apparently the virtual meeting described in this article is an Isle of Wight Green Party initiative, nothing to do with the Don’t Drill The Wight campaign. Vix should have made this clear. I repeat: Frack Free Isle of Wight is not about party politics but about saving our beloved island from irreversible destruction that oil fields will wreak.

Here is the problem: “News shared by Vix Lowthion on behalf of Don’t Drill the Wight.” It appears that the ex partner of a mining billionaire has hijacked your campaign.

Vote Up30-19Vote Down
Tamara
What nonsense. Your quote is disingenuous. It seems you would rather attack Vix Lowthian than defend the Island and all its people from destruction. Shame on you! None of the people who have worked tirelessly for the past six years to research oil drilling and UK Oil and Gas and to raise awareness of this threat are active members of any political party because this campaign is… Read more »
Vote Up25-10Vote Down
fedupbritain
My point is simple (and the quote quite valid) – namely someone with deep rooted family connections to a multinational mining firm (offshore registered) is promoting this and making press releases. I believe that it undermines your efforts to ‘defend the Island and its people from destruction’ and, given her high profile standing within the Green party has made your campaign appear to be a sub-division of… Read more »
Vote Up30-21Vote Down
Sally Perry

I misunderstood who Vix was sending the report on behalf of and have now updated the article to read “News shared by Vix Lowthion on behalf of Isle of Wight Green Party”. Apologies to Vix for the misunderstanding.

No need to apologise Sally – I should have spelt it out.

Wow. This is just incredibly rude. And incorrect.
It was never sent in on behalf of the Don’t Drill the Wight campaign – but in support of it. That statement has been added by On the Wight. I will email them to request a correction.
And my ex partner is not a mining billionaire. I have no idea where to even begin with that accusation!

I misunderstood who you were sending the report on behalf of and have now updated the article to read “News shared by Vix Lowthion on behalf of Isle of Wight Green Party”. Apologies.

Vote Up110Vote Down
fedupbritain
Paul Craggs has been on record saying that he was considering an IPO for xannat in the region of £2 billion. He has often boasted of having higher revenues than hedge funds. He has further stated that he has no external debt. He appears to be the only officer of the company, so it is reasonable to draw the conclusion that he is, in asset terms, a… Read more »
Vote Up15-15Vote Down
Vix Lowthion

You are quoting someone who isn’t me, and hasn’t lived on the island for a decade or more.

This is utterly irrelevant to me, the important campaign in question and the Isle of Wight.

Still waiting for you to post with your name.

Vote Up14-11Vote Down
fedupbritain
My point is that your association discredits the anti fracking anti oil drilling campaigns given your long association with Paul Craggs – I’m pretty sure you were a couple when you stood in the general election, and I’ve yet to hear you denounce his environment shredding business, admit to his billion+ asset worth, his registration of his company in a tax haven and so on. Once you… Read more »
Vote Up17-13Vote Down
Spartacus
Stop all this nonsense we all need to come together in solidarity and object to this dirty business of drilling for oil including councillors who need to get some back bone and stop this from destroying this Island. The Island relies on tourism and 80% of land is agriculture. Land, waterways and the very air we breath will be contaminated all for profit for a few very… Read more »
Vote Up26-1Vote Down
lauque

And we need all the local agriculture we can get/keep, because of what’s coming in the new year. Tory MPs voted on Monday to do nothing to protect British farming and to abandon food standards and animal welfare standards in pursuit of trade deals.

Vote Up220Vote Down
Vix Lowthion
1. If you want to be taken seriously as a commenter, please be honest enough to post using your real name. I always do. 2. I am not a billionaire. Or a millionaire. Or anything above a 3 figure sum, sometimes 4 figures if I have been in lockdown. 3. I don’t have ‘deep rooted family connections to a multi national mining firm’. 4. If I did… Read more »
Vote Up28-10Vote Down
fedupbritain
(1) How very preachy of you instructing me to ‘be taken seriously as a commenter.’ (3) You do have deep rooted family connections to a mining billionaire – aren’t your kids his? Does he pay maintenance? did you ever cohabit and enjoy the financial benefits he provided – rent/mortgage/bills/petrol/utilities etc? I never mentioned coal mining, although Xannat do mine for uranium (is that green?) and thorium. (5)… Read more »
Vote Up16-23Vote Down
casw1

This is a very strange and bitter personal campaign. We are all fed up. Fed up with energy wasted on personal attacks when there is a climate crisis not being treated as a crisis.

Vote Up22-2Vote Down
fedupbritain
This is precisely my point – the climate crisis cannot be actively addressed locally while the campaigns are always fronted by someone with such close connections to a mining billionaire. If she had distanced herself from his mining activities and tax efficiencies we could all take her seriously. Until that point she is adopting a do-as-I-say-not-as-I-do approach and is taking us for fools. How can you take… Read more »
Vote Up8-19Vote Down
wellsm

“Oil drilling using acidisation in our limestone is a very risky technique”
I do not agree with this application however you should get your facts right. UKOG’s application is for a straightforward bored appraisal well, that is neither acidisation nor fracking. People using industry soecific terms should ensure that they understand them before using them.

How does a fact get three down ticks, some of you are just a joke :-)