As well as a Cabinet reshuffle, the Annual Meeting of the Isle of Wight council saw re-election of Chairman and Vice-Chairman as well as Chairs of the various committees. 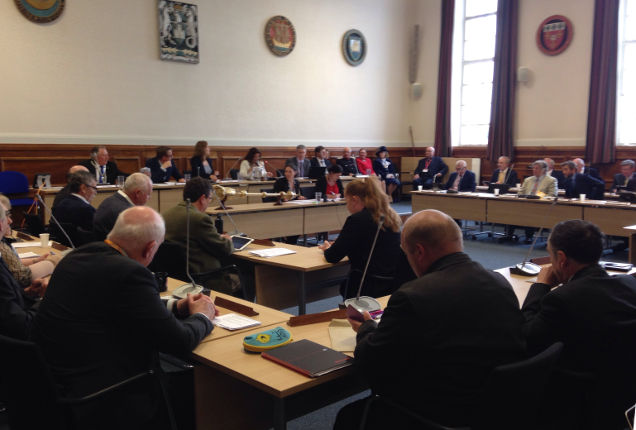 As reported live during last night’s meeting, a cabinet reshuffle has taken place within the Isle of Wight Council (catch up here).

Cllr Gary Peace (Con), who most recently put forward the controversial fire service review, rejected by the council, has been replaced by Cllr Tig Outlaw (Con).

“Cllr Peace has stepped down due to personal and business commitments.

“I wish him and his family well.”

Cllr Geoff Brodie (Independent Labour) raised the issue of cabinet accountability, and a recommendation for a members’ question time of the council leader was passed. However, opposition councillors called for all cabinet members to be available for questioning.

“It’s a step in the right direction but other councils in the country are not this restrictive in their level of questioning.

“The cabinet are scared of having questions thrown at them to which they don’t know the answer.”

Conservative councillor Chris Whitehouse (Con) defended the decision, saying it was ‘courageous’ of the council leader to ‘put himself in the firing line’ by answering questions on the cabinet’s behalf.

Addressing the opposition’s concerns, he said:

“I want to see democracy introduced, but if members are going to posture and prattle on we should just withdraw the motion.”

Cllr Lilley asked the council to reaffirm its commitment to the aims and objectives of the Local Authority Mental Health Challenge, which it signed up to in 2017.

Cllr Brodie’s second motion — which asked the council to call on the government to stop spending money on war in the Middle East and instead spend it on public services — did not pass.

Cllr Brodie said the amount of money spent on recent missiles in Syria (£6.4m) was the same amount Portsmouth University said it costs the Isle of Wight Council to run.

Committee chairs
Other councillors elected to chair committees are:

Ms Baynes: given the rapidity (some might say “caprice”) with which Members swap around, it would be helpful if, when referring for the first time to a Member, you would remind us of their current party allegiance. Thankyou

I have added all the relevant party allegiances to Megan’s article.