Cllr Brodie says the Isle of Wight Council should be “hanging its head in shame, not crowing about something they could have signed up to some time ago”. 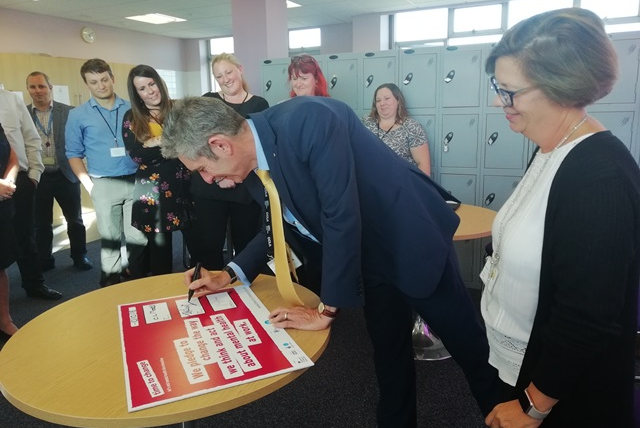 The motion was unanimously at the March 2016 Full Council meeting (see our coverage) and read:

“Council believes that mental health should be given equal priority with physical health. Council resolves to: 1. support ‘Time to Change’ – the mental health anti-stigma campaign; 2. request our Health and Wellbeing Board to explore the adoption of the Time to Change pledge, better workplace practices, and encourage others to do so as well.”

Brodie: “Council should be hanging its head in shame”
The criticism comes after the council issued a press release (see below) on World Mental Health Day (yesterday) announcing

“This media release hardly shows a sustained commitment to addressing mental health issues, does it? This press release is a complete travesty. The Council should be hanging its head in shame, not crowing about something they could have signed up to some time ago.

“During Mental Health Awareness Week in May 2016 staff were told in The Vine [IWC internal newsletter],

“The council has pledged its commitment to helping end the stigma and discrimination experienced by people with mental health problems in the workplace by signing The Time to Change Employer Pledge.”

“Was that a lie to our staff ?

“I was regularly updated as Employment Committee Chair on progress by HR officers up until January 2017, but nothing since. Perhaps Stuart Hutchinson has been getting updates in his one-man role covering all the roles of that now defunct committee. If he has, they have not filtered through to other Members.

“Council media releases are getting ever more ridiculous.”

OnTheWight contacted John Metcalfe this morning for a comment on the accusations, but at time of publishing, he’d failed to respond.

COUNCIL SIGNS TIME TO CHANGE MENTAL HEALTH PLEDGE
The Isle of Wight Council has committed to making the mental health wellbeing of its staff a top priority.

To mark World Mental Health Day, the council has signed the Time to Change pledge, which states employers will change the way they think and act about mental health at work. Councillor Clare Mosdell, Cabinet member for Adult Social Care and Public Health, who signed the pledge with chief executive John Metcalfe, both of whom shared with staff personal stories of how mental health had affected their family, friends and colleagues, said:

“We want to help break the silence and end the stigma around mental health.

“One in four of us will be experiencing a mental health problem at any one time.

“Nine in ten people who have experienced a mental health problem have faced negative treatment from others as a result.

“That’s why we have signed the Time to Change Employer pledge.

“This is a commitment to changing the way we think and act about mental health at every level of this organisation.”

Ahead of the signing of the pledge, the council’s mental health working group developed an action plan of activities for reducing the stigma associated with mental health in the workplace. “We’re already doing lots of work around mental health but in signing this pledge, we have committed to a review of our policies, working with staff groups, introducing mental health first aiders and awareness training for managers.

“It’s really important to me that our staff know how seriously we take this issue and that they have confidence in us as an organisation to provide the appropriate support if it’s needed.”

Time to Change, run by the charities Mind and Rethink Mental Illness, is England’s biggest programme to challenge mental health stigma and discrimination.

newest oldest most voted
eastcowes
Thank you, Geoff, for holding John Metcalfe the CEO to account. He seems to hide behind the politicians, yet he has been the decision maker, if not one of the senior decision makers, for years now. Methinks we all need to watch “Yes, Council Leader”, I mean, “Yes, Minister”, to remind ourselves just how much power the staff at County Hall have in decision making, particularly apparently… Read more »
Vote Up19-1Vote Down