Councillors across the chamber paid tribute to Lora Peacey-Wilcox who has finished her two year term as Chairman of the Isle of Wight council. 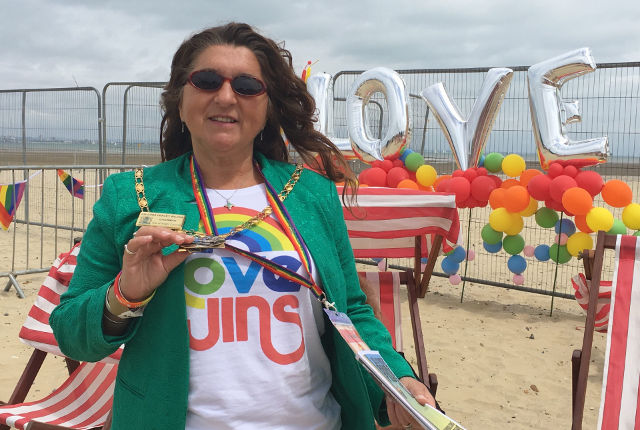 The Isle of Wight council elected their latest Chairman this evening (Wednesday).

Cllr George Cameron (Conservative, Freshwater North) was the only person nominated for the role. He has been vice-chairman for the last two years.

He paid tribute to the outgoing Chairman, Cllr Lora Peacey-Wilcox (Independent, Cowes Medina), adding it was a privilege to be her vice-chairman and that she’s done a brilliant job being Chairman.

Leader of the Isle of Wight council, Dave Stewart, for her two years of hard work.

Stephens: “200 per cent effort”
Cllr Ian Stephens (Ind) said Lora had proven her worth in uniting the council chamber many times over her term.

Howe: “One the best chairman we’ve had”
Cllr John Howe (Ind) echoed all that had been said by others.

“She was a chairman for all councillors and not just a particular person. If you had a problem you could always go to Lora and she’d help you sort it out.

Churchman: “Not afraid to speak her mind”
Cllr Vanessa Churchman (Con) said she had never known a councillor who worked as hard as Lora.

“I reckon she knows every face and name in her ward. She’s essentially such an honest person, she’s not afraid to speak her mind, but in a nice way. She will say what she feels and what she will speak the truth. One of the greatest assets a councillor can have.”

“She actually gets down with the people and brings the people together. In the two years of Isle of Wight Pride, she’s been at the front saying we are an inclusive society and inclusive Island.”

“You find time for people and I think you are a wonderful ambassador, have been a fabulous chairman and you are my role model. Thank you.”

Peacey-Wilcox: “Been immensely proud to serve our Island”
In response, Cllr Peacey-Wilcox said she was extremely humbled by what everyone had said and that her family would be very proud. She went on to say her own thanks,

“Thanks to my fellow councillors for your unanimous support and giving me the privilege of representing the people of our Island.

“Thanks, on the whole, for giving me a fairly easy ride in council meetings.

I’ve been immensely proud to serve our Island and I hope I’ve done so well.”

Thanks to family and friends
She went on to say,

“My thanks to my husband who has supported and funded my role, the extra outfits, the number of mainland visits. My daughters who, for over 20 years, have had to put up with me saying ‘I can’t speak, I’m in a meeting’. Thank you girls, and thanks for your patience and understanding.

“My stand in dog walker, my poor brother Gary, always rushing up to make sure my doggies are safe and well.

“My thanks to all those staff that have been there to help me in the right direction particularly at civic functions. My other family and friends, they know who they are, eternal thanks.”

“After spending the last three long days visiting a number of charitable organisations, almost all of who has had funding cut, my full appreciation from the bottom of my heart for their continuing support for the Island and its families. Every person who volunteers has my ever lasting gratitude and thanks, it’s outstanding.”

She thanked Veronica, “the most perfect chaplain ever”, and Cllr Cameron and presented gifts to them.

“Finally my heart literally breaks at the beauty of this Island, long may that beauty remain, long may us as a council continue to enhance and protect it.”

New vice-chairman
Members also voted Cllr Shirley Smart (Ind) as vice-chairman for the coming year, with several tributes paid to her long service at the Isle of Wight council.

newest oldest most voted
Phil Jordan
Lora, a great term of office and one that showed how the role should and could be done. A great tribute to you by many Councillors who witness and see your efforts and commitment and the ‘behind the scenes’ time and work you put in. All things pass and I’m sure subsequent chairman will do a good job but I can’t help thinking the Island and the… Read more »
Vote Up21-1Vote Down
Benny C
These sound like sincere tributes from many sources which are good to hear in a sickly regime desperate for an injection of ability and talent. I don’t think many of us give any credit to words from Dinosaur Dave or the slightly bewildering Ian Ward these days but there are some worthy contributors here. Let’s hope other Councillors and public office holders take note of what good… Read more »
Vote Up110Vote Down