Despite many medical conditions affecting his mobility and strength, Ian Gregory has cycled over 3,500 miles this year to raise over £4,500 for Prostate Cancer UK. He was presented with the coveted Yellow Jersey at the cheque presentation in London this week. 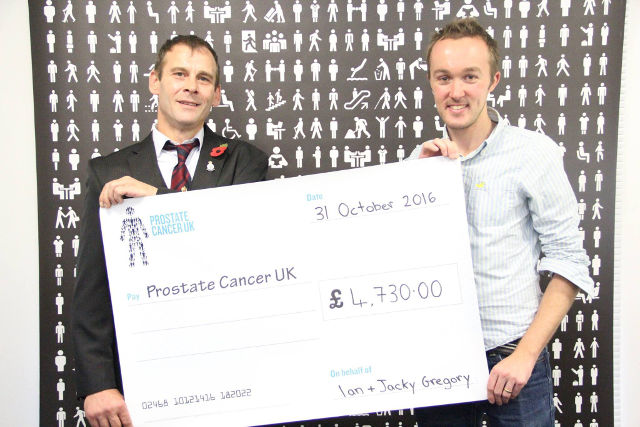 Along with his wife, Jacky, Ian met with Jon Medcraft, the sporting events manager, to officially close fundraising for 2016 and to make a cheque presentation.

“We had a great visit to the offices based at The Counting House in Tooley Street, London, directly under the Shard and opposite London Bridge train station.

“The offices were much bigger than we had expected, with everyone working feverishly away organising more sporting events, assisting ongoing fundraising, getting ready for the launch of Men United’s ‘Movemeber’, dealing with the vast finances involved with such a much needed charity, Website and social media integration, a dedicated room for the speciality nurses manning the telephones and Web-chat to give much needed and invaluable accurate information out to those who are either dealing with or have concerns about Prostate Cancer and of course welcoming guests such as ourselves to the offices.

“The work carried out there is truly immense and desperately needs our continued support, not to mention the funds that go towards scientists searching for cures and far better ways to detect Prostate Cancer long before it becomes a problem.”

Ian awarded the coveted Yellow Jersey
A photo shoot had been organised for Ian to present a cheque for the £4,730 raised over 2016 for the ‘3 Ton Challenge’ in memory of Don Exell.

“However what I was not expecting was the award of a much coveted and unpurchasable ‘Yellow Jersey’. This is only the second one ever issued, after Gary Evans won the first one for the highest fundraiser by midday on the 22nd June 2016, just before the Grand Depart ride from Mont-Saint Michele to Utah Beach.

“I was very nearly moved to tears, welling up slightly but managing to keep things in control.” The presentation was followed by an outpouring of congratulations on social media, including a tweet from the existing Yellow Jersey winner, Gary Evans, who said, “A very worthy yellow jersey wearer, Ian your efforts this year have been amazing, well done”.

Supported by other athletes
Ian said,

“Not only are these high accolades from some far better athletes than I, but I have been amazed and very humbled that some of the other riders from the Grand Depart event have even made donations to my own Just Giving page.

Ian is already signed up for next year’s Grand Depart from Dusseldorf in Germany to Liege in Belgium, a 125 mile route and once again raising money for Prostate Cancer UK and has decided to make an attempt for 10,000 miles for the year. He achieved 3,555 miles in 2016.

Thanks for support
Ian thanked all those who offered support this year. He said,

“I would like to thank everyone who donated this year both online and in cash in the bucket at pedalling events.

“Also I must thank all of the businesses that have supported me this year, either allowing me to pop along and fundraise or assisting with ferry travel. So I would like to thank Tesco Express Wootton, Morrisons at Lake, Waitrose in East Cowes, Busy Bee Garden Centre, V-Dub Island Festival, the Havenstreet Steam Show, Isle of Wight Radio, The Isle of Wight County Press, OnTheWight, The Gran Fondo Guide, Red Funnel Ferries and Wightlink, and I hope we can count on their continued support for 2017.”

Get involved for 2017
Ian finished by saying,

“I would also like to invite other businesses on the Island to get involved and help support Prostate Cancer UK, we will be at many shows again this year and would love to add their names to a supporters banner that we can proudly display, likewise there will be a few things needed to help me pull off an epic event over next year’s Grand Depart on the continent and would also welcome support for this.”