The very rare find was discovered by two different holiday makers and a resident from Ryde. They’ll be on display at Dinosaur Isle from today (Wednesday) 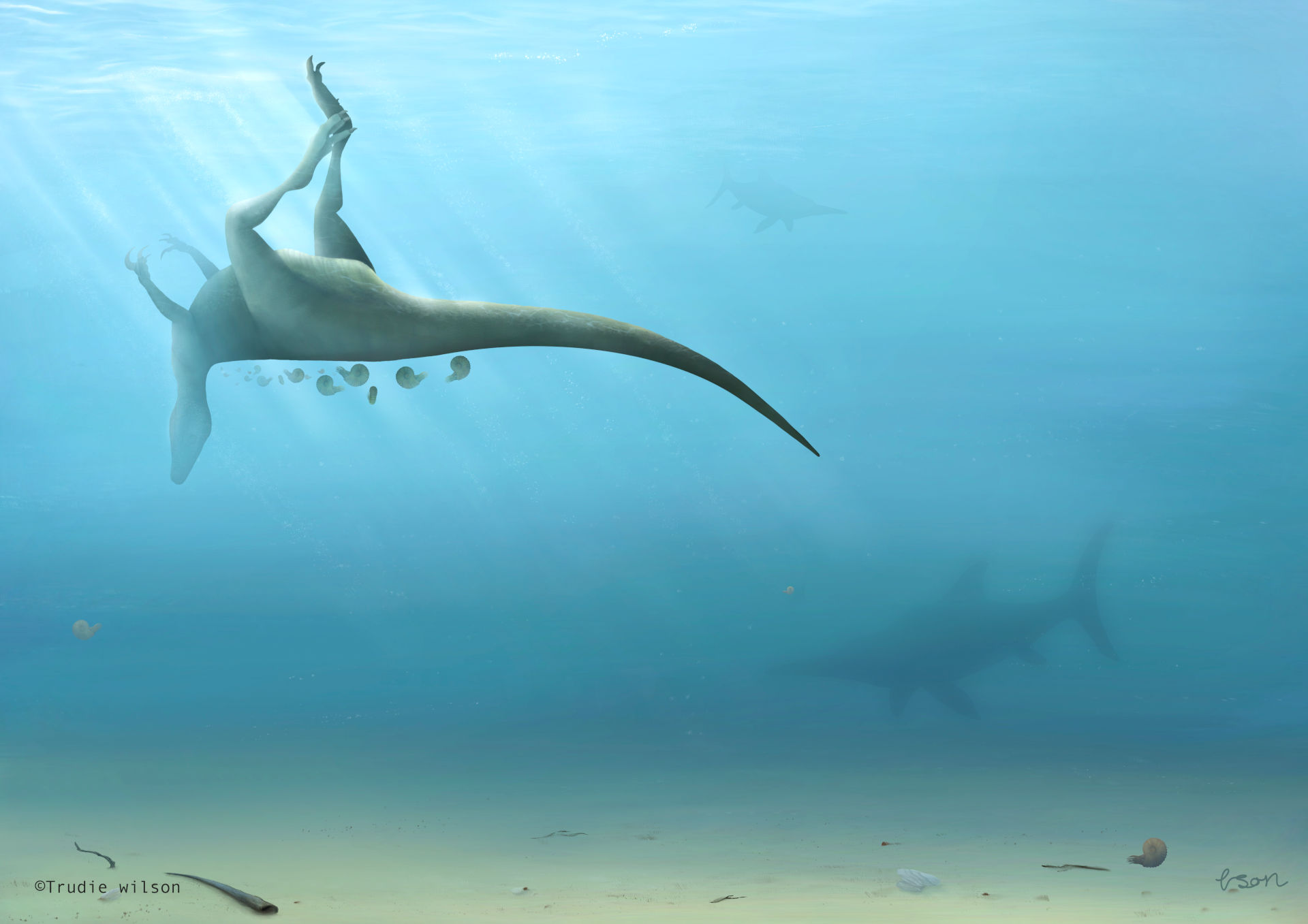 Scientists in Southampton believe four bones recently found on the Isle of Wight belong to a new species of theropod dinosaur, the group that includes Tyrannosaurus rex and modern-day birds.

The dinosaur lived in the Cretaceous period 115 million years ago and is estimated to have been up to four metres long.

Found in Shanklin
The bones were discovered on the foreshore at Shanklin last year and are from the neck, back and tail of the new dinosaur, which has been named Vectaerovenator inopinatus.

The name refers to the large air spaces in some of the bones, one of the traits that helped the scientists identify its theropod origins. These air sacs, also seen in modern birds, were extensions of the lung, and it is likely they helped fuel an efficient breathing system while also making the skeleton lighter.

The scientific study has confirmed the fossils are very likely to be from the same individual dinosaur, with the exact location and timing of the finds adding to this belief.

Discovered by holiday-makers
Robin Ward, a regular fossil hunter from Stratford-upon-Avon, was with his family visiting the Isle of Wight when they made their discovery.

“The joy of finding the bones we discovered was absolutely fantastic. I thought they were special and so took them along when we visited Dinosaur Isle Museum. They immediately knew these were something rare and asked if we could donate them to the museum to be fully researched.”

Lockyer: Searching areas others do not paid off
James Lockyer, from Spalding, Lincolnshire was also visiting the Island when he found another of the bones. Also a regular fossil hunter, he said:

“It looked different from marine reptile vertebrae I have come across in the past. I was searching a spot at Shanklin and had been told and read that I wouldn’t find much there.

“However, I always make sure I search the areas others do not, and on this occasion it paid off.”

Farrell: Shocked to find out it could be a new species
Paul Farrell, from Ryde, Isle of Wight, added:

“I was walking along the beach, kicking stones and came across what looked like a bone from a dinosaur.

“I was really shocked to find out it could be a new species.”

Their findings will be published in the journal Papers in Palaeontology, in a paper co-authored by those who discovered the fossils.

Barker: A rare find indeed
Chris Barker, a PhD student at the university who led the study, said:

“We were struck by just how hollow this animal was – it’s riddled with air spaces. Parts of its skeleton must have been rather delicate.

“The record of theropod dinosaurs from the ‘mid’ Cretaceous period in Europe isn’t that great, so it’s been really exciting to be able to increase our understanding of the diversity of dinosaur species from this time.

“You don’t usually find dinosaurs in the deposits at Shanklin as they were laid down in a marine habitat. You’re much more likely to find fossil oysters or drift wood, so this is a rare find indeed.”

It is likely that the Vectaerovenator lived in an area just north of where its remains were found, with the carcass having washed out into the shallow sea nearby.

Barker: Very grateful for the donation of these fossils to science
Chris Barker added:

“Although we have enough material to be able to determine the general type of dinosaur, we’d ideally like to find more to refine our analysis.

“We are very grateful for the donation of these fossils to science and for the important role that citizen science can play in palaeontology.”

Dinosaur Island
The Isle of Wight is renowned as one of the top locations for dinosaur remains in Europe, and the new Vectaerovenator fossils will now go on display at the Dinosaur Isle Museum at Sandown, which houses an internationally important collection.

“This remarkable discovery of connected fossils by three different individuals and groups will add to the extensive collection we have and it’s great we can now confirm their significance and put them on display for the public to marvel at.

“We continue to undertake public field trips from the museum and would encourage anyone who finds unusual fossils to bring them in so we can take a closer look. However, fossil hunters should remember to stick to the foreshore, and avoid going near the cliffs which are among the most unstable on the Island.”

Hobart: Yet another terrific fossil find on the Island
Isle of Wight Council Cabinet member for environment and heritage, Councillor John Hobart, said:

“This is yet another terrific fossil find on the Island which sheds light on our prehistoric past – all the more so that it is an entirely new species.

“It will add to the many amazing items on display at the museum.”

On display at Dinosaur Isle
A display explaining the new find is due to be on show in the main gallery of the museum from Wednesday 12th August.

The paper ‘A highly pneumatic ‘mid Cretaceous’ theropod from the British Lower Greensand’ by Chris Barker and those who discovered the fossils will be published in Papers in Palaeontology. The authors and University of Southampton have made their findings ‘open access’.

newest oldest most voted
Benny C
The IOWC Cabinet is indeed the place to find the only remaining herd of ineptosaurs. A creature with a small brain and eyes that face mostly backwards, if open. Their diet mainly consists of generous helpings of expenses which they consume is large groups, the larger the better. In order to be fully fed they need to engage with something they don’t understand and have a vote… Read more »
Vote Up18-1Vote Down
Colin

Are you sure they are extinct? I think some of the DNA has been passed down and can currently be found at County Hall…

Are you sure you are not Arthur Askey? Is he still here?

Only in spirit. He left in 1982. Have uou tidied up around your shed yet?

Perhaps they’ll name the next one after Bob, he enjoys living in the past!

Ineptoseelius sausagopotamus is , I think you’ll find, a new discovery you can rightfully claim for yourself.

Why turn the news of a great fossil discovery into an attack on our benighted council.

Vote Up4-9Vote Down
Colin
Probably because it’s a hot, we’ve nothing better to do and it amuses some of us. lol You sre right, of course; it is an amazing find and adds to the excellent collection here. One of the good things that the Island is rightly known for. I could add that the future of the Dinosaur museaum is still uncertain given the IWC inability to maintain the building.… Read more »
Vote Up90Vote Down
Benny C

I agree. Amazing find. I have had text messages from friends as far away as Abu Dhabi asking about it. Properly good pr for the island too.

Because they deserve it.