Isle of Wight MP Bob Seely raised several points during a parliamentary debate yesterday about the transport infrastructure on the Island. Details and video within. 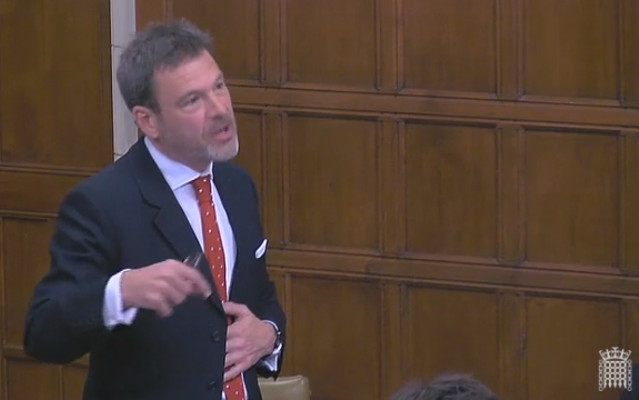 During yesterday’s (Tuesday) Westminster Hall debate on Regional Transport Infrastructure Isle of Wight Conservative MP, Robert Seely raised the issue of the Island’s ferry duopoly, the age of Island Line carriages and the speed of train travel from Southampton and Portsmouth to London.

Seely: “Most expensive ferry route in the world”
The Isle of Wight MP started,

“First, I would love Ministers to look at the ferry duopoly on the Solent.

“It is the most expensive ferry route in the world, and many issues that relate to the ownership of the two ferry companies are not necessarily in the public interest and help to sustain the very high fares that Islanders are forced to pay.

“There is also the issue of the debt that is loaded on to at least one of those companies.”

New rolling stock for Island Line
The MP went on to talk about Island Line how important it is for Islanders.

“Secondly, Island Line is not the longest railway line in the world, but it is nevertheless the line from Ryde Pier Head down to Shanklin, which is very important for Islanders.

“At the moment, travelling on Island Line is almost the rail equivalent of travelling in a Land Rover over a reasonably rough bridleway. It needs significant infrastructure work on the track, signalling and rolling stock.

“We have ten Northern line carriages from 1938. As part of the modernisation for the priced option, if the Minister is generous enough, we will get refurbished 40-year-old rolling stock, which we will be more than happy with—it will be 41 years younger than the 81-year-old rolling stock we currently have. I hope I can press my hon. Friend the Minister to be generous.”

“Finally, I want to mention Southern railway. I really hope that HS2 is not diverting funds to every other rail project in the country. We should have proceeded with HS3, the northern high-speed railway, which is, as the Americans say, a no-brainer, rather than build a £100 billion route from London to Birmingham, which I am not sure we need—perhaps some of my colleagues disagree. Because of that, I am concerned that the main line routes to Portsmouth and Southampton will not get the attention they deserve.

“What I find most staggering is the speed of the London to Portsmouth express train service: currently 47 miles an hour, which is slower than it was in the 1920s. Will the Minister look at some of the examples of where a little bit of impetus from him and the Department for Transport would reap real benefits for our economy in the Southampton-Portsmouth conurbation, and especially in my constituency?”

You can watch Bob’s speech below.

11 Comments on "Isle of Wight MP asks Transport Minister to be ‘generous’ with Island Line, and investigate ‘ferry duopoly’"

newest oldest most voted
Colin
With failing Grayling as the transport minister, there will be no money left for anything. The man’s just wasted £33 million to keep Eurotunnel quiet after his latest ferries debacle. That would have revamped Island line with change to spare. The incompetence of the current government knows no bounds. You could have built a bridge over the Medina with the millions that the government wasted on the… Read more »
Vote Up33-2Vote Down
Steve Goodman
Failing Grayling, Bob’s less than “hon. friend” who refuses to resign despite his well-documented lengthy record of raising costs, losses, and misery through more than one Ministry, is certainly “generous” with our money; having already wasted over £2 billion of it, the latest Private Eye (1491, p.11) reports him ready to to commit another £3 billion “despite a public accounts committee warning that ‘the department is not… Read more »
Vote Up14-2Vote Down
njb249

Bob, asking for Ministers to look at the ferry duopoly on the Solent, whatever next? Has he had a falling out or is he just trying to get rid of the debt that a specific ferry company has?
Discuss.

The latest Private Eye (1491, p.12) reports Bob’s falling out with former Tory MP Greg Barker, who David Cameron made Lord Barker, and who appears to be a businessman in bed with the sort of sanctioned Russians we’re told to worry about.

Yet still he doesn’t mention the Elephant in the Room!

What you mean Carl?
That’s the only elephant in this room.

Vote Up3-45Vote Down
carlfeeney
How is it possible to take any word this MP says seriously, when his cousin Patrick Seely is a Director of Red Funnel and Bob Seely works for lobbying company ‘Chine Consultancy whose biggest client is Wightlink? Pure ‘lip service’ by an MP who has everything to gain by protecting the ferry companies from a fixed link competitor. It’s astonishkng how the electorate can be so taken… Read more »
Vote Up14-39Vote Down
greatergood

I’m surprised you two don’t get on Carl, you are both full of it, and I don’t mean ideas.
You keep saying you have proof of this and that, you don’t have squat (just like the non existent support and poor donations for your dream tunnel!)

There’s plenty of support for the link but the ferry companies and their chums in high places are desperately trying to squash the matter.

Vote Up7-24Vote Down
grumpymoo
If there was plenty of support for a fixed link and it was to be as successful as spouted, then there would be companies clambering at the opportunity to finance, build, own and profit from such a piece of infrastructure. As it stands, the crowdfunding (which is pushed under the noses of those it would affect/possibly benefit most, islanders) has failed miserably. Not as much support as… Read more »
Vote Up24-2Vote Down
greatergood

No Tim, there is not enough support for the link, or very much interest in it anymore either!
If there was so much support as quoted by pro-link, steps toward it would have progressed a lot further by now.
It’s a dead duck.