The next Symphony Orchestra concert is cancelled due to the Coronavirus outbreak, but you can read how last weekend’s enthralled the audience 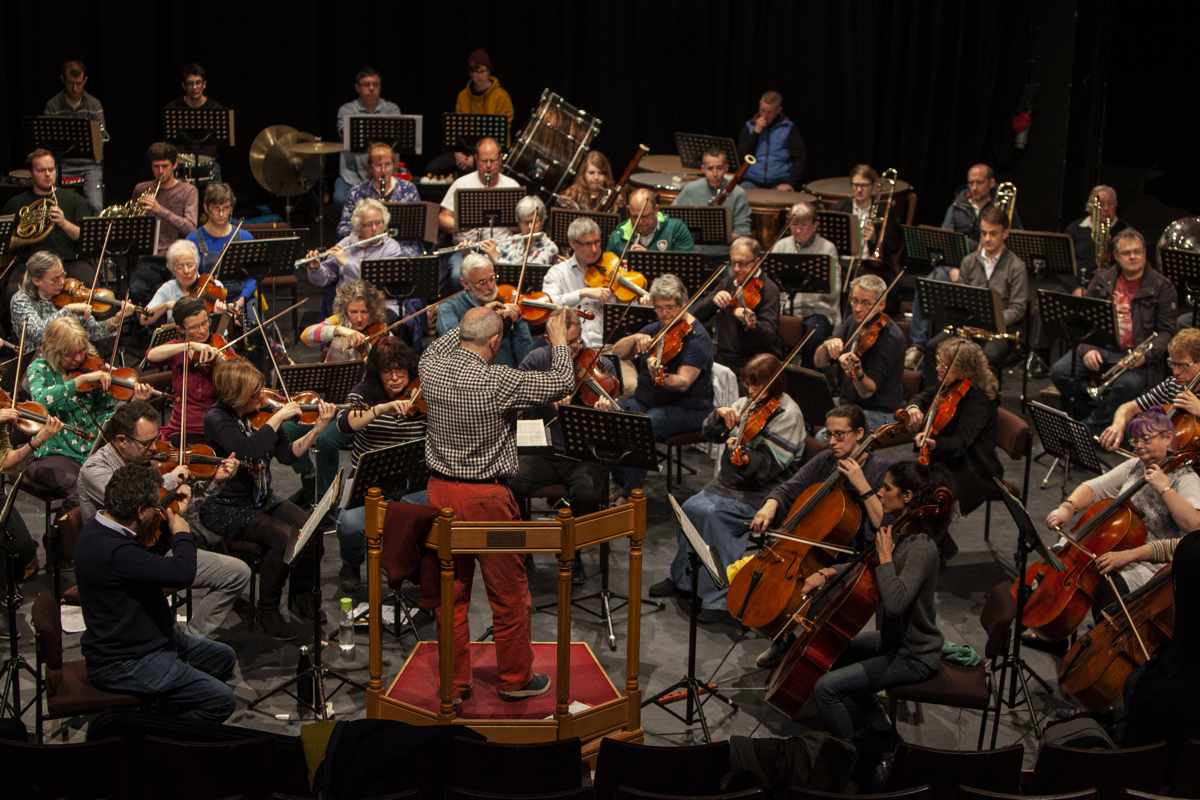 Jonathan Dodd shares his review of the latest Isle of Wight Symphony Orchestra (IWSO) concert. Images from the rehearsal with kind permission of Allan Marsh. Ed

The Saturday before last I was privileged to attend the third concert in the Isle of Wight Symphony Orchestra’s (IWSO) current season at the Medina Theatre. Our conductor, Jonathan Butcher, announced that the concert programme had been requested and sponsored, and included pieces that were unfamiliar as well as an old favourite played on the piano by a well-loved soloist.

The IWSO continues to provide quality music and performance, mixing the familiar with works not so well-known, which suits me very well. Sadly, because of the ongoing health situation, the theatre wasn’t full, although the tickets had all been sold, but most people turned out. They were not disappointed.

The first piece was the Caprice Bohemien, by Sergei Rachmaninov. It was written between 1892 and 1894, when he was a mere 20 years old, and also became known as his Gypsy Fantasia, being an imagined tone poem about the pleasures of Gypsy life. He was an admirer of someone’s Gypsy-born wife, and these feelings may well have inspired the vigour and energy of the piece.

It starts very quietly, and builds through a series of inventive tunes and dances to a thrilling climax and a very dramatic ending, all excellently carried off by the orchestra. It was very pleasant to listen to and to watch.

The first piece of classical music I fell in love with
After a short interval where the violins nimbly cleared a space and the grand piano was expertly manoeuvred to centre stage, to good-natured applause, the orchestra and audience settled down to await the arrival of Viv McLean, and the magnificent Tchaikovsky’s Piano Concerto No. 1. I had been looking forward to this event ever since seeing this season’s programme list.

It wasn’t something my mind even registered, but someone put this record on, and I really heard it. From listening to this piece my love of classical music grew and flourished, so I owe it a great deal.

The whole audience forgets everything else
Viv McLean is a charismatic performer. His arrival is anticipated, the audience knows they are going to be thrilled, and he enters to a surge of excitement, all eyes are on him as he settles into his seat.

As soon as the piece begins, the whole audience forgets everything else, and is carried away.  That beginning fanfare, followed by the powerful chords of the piano are enough to grab anybody’s attention, and I was thrilled by the power and majesty of it as I was that first time I heard it, all those years ago.

This concerto is so familiar and yet it never loses its ability to entrance the listener with its romance and the intensity of its emotions, sweeping up and down the keyboard maniacally, and suddenly switching to simple but achingly beautiful quiet sections.

In the hands of a master, it’s gruelling and wonderful, and Viv McLean is a master, and the IWSO played their fingers off, matching him at every moment and turn and swoop, and my heart melted again. It was lovely and unforgettable.

Like being told a wonderful story by a masterful story-teller
After the interval, we were introduced to the Symphony No. 1 by Mily Balakirev, which is rarely performed nowadays, and I think it doesn’t deserve that. I suppose it suffered from bad timing, which sometimes unfairly sideswipes good work. Balakirev showed great promise in the mid-1800s, and was seen as a future star, and tutored several upcoming composers.

Sadly, in 1864, he disappeared from sight and gave up music entirely for thirty years, when he completed the symphony he had only started when his problems occurred. Unfortunately, he never caught on, partly because his music was seen as old-fashioned, but mainly because several young composers, some of whom he had tutored, had become popular through their genius.

On Saturday the IWSO gave him his due, by playing this symphony beautifully, showing us what a great composer he could have become if fate had allowed. I loved his tunes, and the lyrical way he used the orchestra, and the different moods and tones he created in an unfussy way without much excess.

Listening to it was like being told a wonderful story by a masterful story-teller. I’ve listened to it twice since then, and I like it better each time. Give it a try, you might like it too.

Thanks to the wonderful musicians in the orchestra, all of whom performed beautifully. And thanks to Mr Butcher, for conducting superbly, as always.

I will miss the IWSO in May, and I hope that all the musicians and followers will get through this difficult time safely, so we will all be able to share this wonderful orchestra for many more years.

Be safe. See you next time.