Jonathan shares his review of the final Isle of Wight Symphony Orchestra concert of the season and gives us a sneaky peek of what’s coming up next. 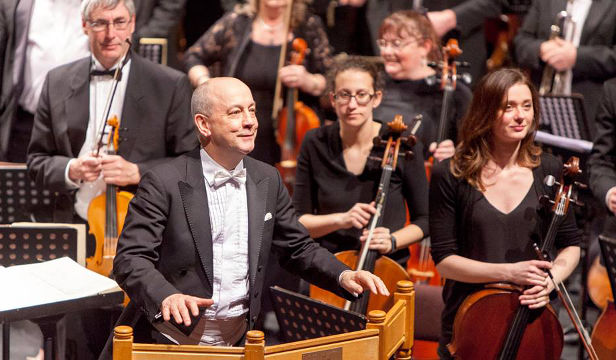 The last concert of the Isle of Wight Symphony Orchestra’s season is always a night to remember. This year, at Medina Theatre on Saturday 7th July, they let rip and produced a programme both varied and exciting for any audience anywhere, and they infused it with their own very special brand of enthusiasm and joy, mixed with a high degree of musical skill and panache.

A full house
This concert, alongside every concert of the last there years, was a sell-out, and it’s easy to see why. The whole programme was a set of orchestral music from the world of Opera, with many firm favourites and some new and surprising pieces.

The first piece was an old favourite of mine. I first heard it in 1971, when I went to see A Clockwork Orange, the film by Stanley Kubrick, which did so much to help me to appreciate classical music.

The Overture to the Thieving (or Thievish) Magpie, by Gioachino Rossini, is one of those brilliant pieces of music that can be taken out of context and used for a multitude of purposes, because it’s so good. It starts out quietly, and gradually becomes louder and faster, before finishing with a great deal of noise. I loved it from the first time I ever heard it in that dark cinema in 1971, and I’ve loved it ever since. But  never got the chance to hear it performed by a real orchestra, and the IWSO made the hairs stand up on top of my head. A great opener, and pure joy. Thank you.

Gondoliers and Marches
The second piece was the Intermezzo and Barcarolle from the Tales of Hoffmann, by Jacques Offenbach. This is another piece of music that has been used in innumerable ways since it was incorporated into Offenbach’s comic opera.

It started out as a traditional gondolier folk song, and it’s familiar to us either as a duet in the opera, or as a concert piece for orchestra. It has a lovely lilting tune, and it cannot fail to soothe the brow and lull the heart, especially when played as beautifully as it was last Saturday.

The third piece was the Grand March from Aida. Jonathan Butcher, the IWSO’s esteemed conductor, told us a story of competing opera houses in Rabat, the capital of Gozo, adding more and more spectacle and animals to their performances, and adding musicians to amplify the noise. He apologised for not being able to provide livestock, but the players made up for that by playing beautifully, especially the brass section and the percussion. It was magnificent, and loud, and magisterial and splendid.

Forests and Polovtsians
The fourth piece was completely new to me. Taken from Siegfried by Robert Wagner, Forest Murmurs was almost a tone poem, a respite in the main action, where Siegfried rests in the forest and is lulled by the sounds of the forest. These were complex phrases, representing birdsong or animal movements, and were played brilliantly by the woodwind section, with lovely harmonies, over a background played by the rest of the orchestra. It was haunting, and peaceful after the previous March, and beautiful.

The fifth piece was also known to me through numerous films. For years I couldn’t work out why it sounded so familiar, until I understood that the tune had been reworked as ‘Stranger in Paradise’ for the musical ‘Kismet’. It’s a lovely tune, written by Alexander Borodin for his opera Prince Igor.

It’s another of those pieces that has outlived its origin and become a famous and well-loved work in its own right. It has a lovely lilting movement to it, and once heard, it is never forgotten. The orchestra did it justice, bringing an end to a thoroughly entertaining and enjoyable first half.

Bullfights and Dances
After the interval, we heard another gem, the Prelude to Carmen by Georges Bizet. This brings in lots of the melodies to be heard in the opera itself, and conjures up the passion and excitement of the spectacle to be presented. It contains lots of vitality and colour, and is familiar to everyone, but for me it was given a new dimension by being performed live. Lovely.

This was followed by a piece by Frederick Delius called La Calinda, from an opera called Koanga. It depicted a wedding dance on a plantation. It contained a lot of Delius’s characteristic harmonies and complexity, and the orchestra brought it to life with great skill. This was in turn followed by the Polka, from Schwanda the Bagpiper by Jaromir Weinberger, based on a Czech folk tale. I had never heard anything of this before, but it played pleasantly, and would reward another listening.

The last two pieces in the programme were more familiar. Penultimately, we were treated to Ralph Vaughan Williams’s Fantasia on Greensleeves, from Sir John in Love, an operatic version of The Merry Wives of Windsor. We are all familiar with Greensleeves, a tune much older than Henry VIII’s version, and the beautiful arrangement by Vaughan Williams was luscious and dreamlike, and was played like a dream by the strings and flutes of this exceptional orchestra.

Finally, there was a Symphonic Picture from Porgy and Bess by George Gershwin, featuring most of the tunes from the musical, played in Gershwin’s distinctive Jazz-based style, with added saxophones and a banjo. It captured the essence of the show. This was a complex melange of styles, and required great concentration and timing, all of which were managed masterfully by the whole orchestra in a fitting finale to a wonderful evening of music.

A Telling Encore
As an encore, we were delighted to be given a rousing rendition of Gioachino Rossini’s William Tell Overture, familiar to me culturally because it accompanied my childhood by being adopted as the theme tine for the Lone Ranger programmes I loved to watch on television, and also from A Clockwork Orange, also in an electronic version that amazed me at the time.

The orchestra attacked the famous tune, with trumpets at full blast, and made my evening complete. Thank you for a truly grand finale.

Next Season
The Isle of Wight’s next season begins on Saturday 16th November at Medina Theatre at 7:15, with the magnificent Karelia Suite by Jean Sibelius, an impassioned call to arms to defend his country from invasion.

The season will include such gems as the Firebird Suite by Stravinsky, Tchaikovsky’s First Piano Concerto, played by the brilliant Viv McLean, and Mahler’s 5th Symphony, and it will end with an all-American Independence Day concert on 4th July.

It all promises to be amazing and utterly memorable. Grab your tickets before it all sells out again.