Read Jonathan’s review of the penultimate Isle of Wight symphony Orchestra concert of the season. 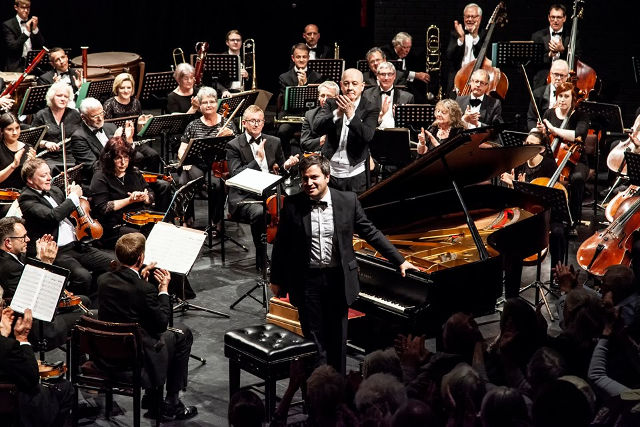 We attended the fourth concert in the Isle of Wight Symphony Orchestra’s 2018-2019 programme earlier this month.

The weather was finally settled, almost warm, and the audience seemed to be in a good mood, thoroughly anticipating the musical gifts to be laid before us.

The concert started with a rousing piece called the Overture in C, otherwise known as the Trumpet Overture, by Felix Mendelssohn. I used to think that an overture was played as a sort of introduction to an opera, while the audience settled down, but Mendelssohn used to write a standalone piece and call it a ‘Concert Overture’, even though it didn’t introduce anything. He was only 16 at the time, so I suppose he could be excused, and his father liked it.

There isn’t a large part for trumpets either, but they feature strongly, and were played with great skill, underpinning the whole work and giving it shape. This was a typical energetic 19th Century orchestral work, an excellent vigorous way to introduce a concert programme, and I enjoyed it very much.

From sombre to joyous and triumphant
The second piece was the Fantasia On the Alleluia Hymn, by Gordon Jacob. Jacob was a prolific English composer during the 20th Century, although his works aren’t performed much nowadays. He reworked a 17th Century German hymn that had been set to English words, and known as ‘All Creatures of Our God and King’, familiar to all who go to Church, and it was played at the Coronation in 1953.

He invests this simple tune with a variety of moods, from sombre to joyous and triumphant, without losing the basic theme throughout, and the famous ‘Alleluia’ chorus repeats, as it does when sung as a hymn. All the elements of the orchestra had a chance to shine musically, and they played the piece immaculately.

The third piece was much anticipated. IWSO fans do like a difficult and spectacular piano concerto, and this one promised to be fiendish. Prokofiev started writing his 3rd Piano Concerto in 1913, but it was interrupted by events in Russia, and he didn’t finish it until 1921, and he first performed it that year in Chicago.

It starts quietly with a lovely clarinet tune, and then the piano jumps in and immediately declares its intentions with a striking display of frenetic finger work. The orchestra and piano then proceeded to complement each other, with the fingers of the soloist propelling themselves up and down the keyboard, crossing over and moving at lightning speed.

There’s an instruction to play ‘Tempestoso’
Prokofiev often finishes a phrase or progression of notes with a note that at first appears jarring, but actually changes the mood or dynamic, so it can go in a completely different direction.

Florian Mitra, the talented young soloist, played with precision at great speed, and never missed a note or a beat in a magnificent performance that had the audience enraptured. There’s an instruction to play ‘Tempestoso’ in part of the Second Movement, and he certainly did that.

I can’t begin to understand how such a performance is possible, and I just remember holding my breath for long sections, leaning forward mesmerised, while his fingers flew up and down the keyboard, with the orchestra perfectly attuned to his every move. There was a well-deserved storm of applause afterwards, and both the musicians and audience needed a break very much when the concerto came to a close.

A man in the row in front of me turned and said that the fingers had to move faster than the brain could make them, and I quite believed him.

A supremely skilled composer
After the interval the Isle of Wight Symphony Orchestra settled down to perform Brahms’s 4th Symphony. Born in 1833, Brahms is regarded as one of the great composers, and was in his prime when he composed this, his last symphony. He was seen as a traditional composer, who paid tribute to the great composers of the past, like Bach and Beethoven, as well as a supremely skilled composer.

He didn’t attempt to be fashionable, but composed what he wanted, and publishers were often worried about the reception his music might receive. Worrying wasn’t necessary, because each movement was applauded at the premiere in 1885.

The Fourth Symphony was very popular with the public and the musical community, and has been a favourite ever since. I listened to it, marvelling at the complexity of the music, and the beauty of the themes, and the skill of the orchestra, and the IWSO did it justice. I realised how little I actually know about this kind of music, so I resolved to get hold of a copy and listen to it at home. I don’t mind not understanding, because that’s an opportunity to find out more, and to widen my knowledge and appreciation. That’s another good reason to go to watch excellent orchestras playing this great music live. Well done all.

Coming up
I can’t wait for the season finale, at Medina on Saturday July 7th at 7:15pm.

There’s going to be a selection of ‘Concert Gems from the World of Opera’. There will be tunes I already know and love, as well as pieces I’ve never heard, which is an ideal combination.

I’m particularly looking forward to Rossini’s Thieving Magpie Overture, and the Polovtsian Dances by Borodin, and the Prelude from Carmen by Bizet. And there are other gems from Offenbach, Verdi, Wagner, Delius, Vaughan Williams, and Gershwin. And who could resist listening to something called ‘The Polka from Schwanda the Bagpiper’, buy Jaromir Weinberger?

Book now
This concert may already be sold out (currently one ticket left but there may be returns nearer the time), but there may still be some tickets left. Grab them while you can.

Thanks, as always, to Jane Pelham, who allows me to plagiarise her excellent Programme Notes so flagrantly.

See you there. It’s going to be great.