The Island Table Tennis team are poised to bring home up to three medals, and are looking forward to the final day of competition (Friday) with confidence and belief after their brilliant performances throughout these games. 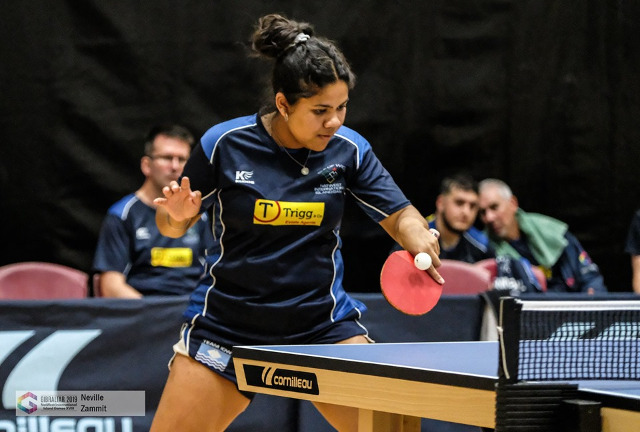 Debbie shares this latest news on behalf of the Isle of Wight Table Tennis team at the NatWest Island Games. Ed

After their success in the team event, the Island team started their bid for medals in the singles and doubles.

Women’s Singles and Doubles
First up were the group stages, where Temeesha Hobbs (pictured above) made it through to the knockout rounds in the Women’s Singles without dropping a set.

In the Women’s Doubles Temeesha joined up with Anna Joyce and finished joint top of the group with two other teams but went out of the competition on countback of number of sets won.

Men’s Singles and Doubles
Alex Rorke, Simon Proffitt, Danny Burns and George Downing also all made it through their groups in the Men’s Singles and Doubles, with Downing saving six match points in his singles game against his opponent from Menorca, which he finally won 18-16 in the last set. The Mixed Doubles also saw the two Island pairings go through.

After an exhausting 11 hours contesting the group stages, Thursday proved just as tiring with a number of knockout games to play before the semis and finals on Friday.  To compound matters, at this stage, the singles matches were contested as best of seven sets, instead of the usual five!

Women’s Singles
In the Women’s Singles, young Temeesha Hobbs battled through six tiring sets against home favourite Meenal Viz to make it into the quarter finals, where she now played in an exhausting seven set match against a fierce Greenland opponent.  Despite a heroic performance Hobbs was beaten in the final set.

Men’s Doubles
Next up was the Men’s Doubles, where Simon Proffitt and Alex Rorke were unlucky to lose out in a close five set encounter with a quality Cayman Islands pair, and did not progress to the quarter finals.

However, Danny Burns (pictured below) and George Downing made it through to the semis without dropping a set, where their opponents will be Jersey.

Mixed Doubles
Last up was the Mixed Doubles, where Burns and team mate Anna Joyce were unlucky to lose out to a quality Jersey pair. Downing and Hobbs lost only one set on their way to the semi-finals, where their opponents will be Gotland.

The Island Table Tennis team are poised to bring home up to three medals, and are looking forward to the final day of competition (Friday) with confidence and belief after their brilliant performances throughout these games.