The Isle of Wight table tennis team surpassed all expectations, putting in some magnificent performances to finish fifth in the team games – up from ninth at the last Games. 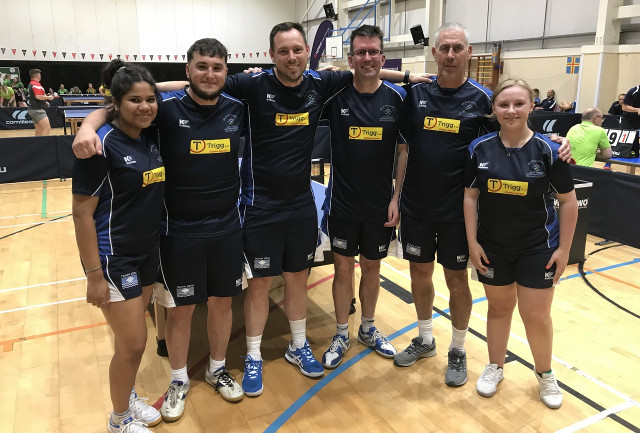 Debbie shares this latest report from the NatWest Island Games on behalf of the Isle of Wight Table Tennis Association. Ed

The Isle of Wight Table Tennis Team, sponsored by Trigg & Co, performed out of their skins to gain the huge achievement of coming fifth in the Team Event at the Island Games in Gibraltar.

The team were drawn in the so-called Group of Death with Jersey and Aland, who finished third and fifth in the last Island Games two years ago, whereas the Isle of Wight finished ninth.

As the match reached the mixed doubles stage they needed one more win for victory.  Young Temeesha Hobbs paired with Downing against a pair who had never lost an Island Games match!  This proved to be an incredible game which the Island pair fought to the end to win and they took the match 4-3.

Playing the professionals
The next opponents were Jersey and we were rank outsiders again – (two of the Jersey players are professionals), yet this proved another close match.  Downing managed to win one epic singles match and Hobbs scored a brilliant 3-0 victory in her women’s match.

Hobbs then paired with Anna Joyce in the women’s doubles and this went to a nail-biting fifth set, which they ultimately lost.  The match ended 4-3 to Jersey.

As runners up in their group, the Island went through to the quarter finals the next day, where they met undefeated Guernsey, who had won the team event for many years, and whitewashed all the teams in their group.  The Islanders fought hard, but lost 4-2.

The play-offs
This left them in the play-offs for fifth–eighth place in the tournament.

Their first opponents were the Faroe Islands who they defeated with ease, and women Hobbs and Joyce won their first doubles of the tournament.

The last match to decide the final placing was against Menorca where Downing and Hobbs both took their singles matches, and the women once again gained victory in their doubles after a thrilling game, to take the tie for the Island 4-1.