Steve Egerton-Read, the White-Tailed Eagle Project Officer on the Isle of Wight for Forestry England shares this latest update 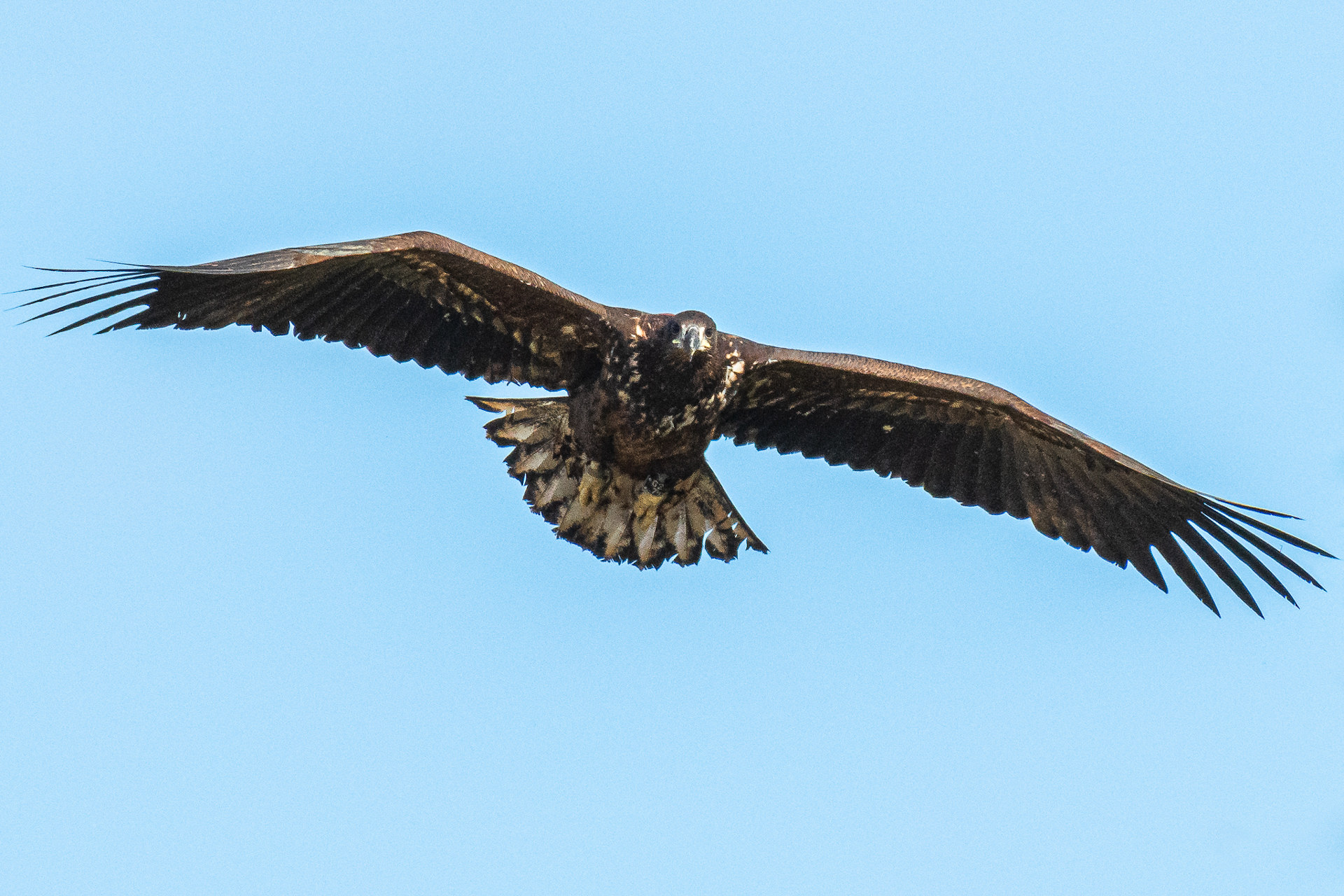 After a really wet and windy autumn, winter is truly underway now. The days are short and we’ve had a number of heavy frosts – even here on the sunny Isle of Wight!

Despite the difficult weather conditions, the young white-tailed eagles are doing well; conserving energy on wet and miserable days, but making the most of the breaks in the weather to search for food.

Three of the six still here
Following the epic flights of a couple of the birds early after release, perhaps the most surprising fact is that in the past six weeks none of the eagles have moved particularly far.

Three birds remain on the Isle of Wight, and bird ‘G3 93’ is still in Oxfordshire.

Home-loving eagles
The satellite tracking data gives us a fascinating insight into the young eagles’ daily movements, and has shown that they are often extremely sedentary; perching quietly in wooded areas for much of the day and seldom flying more than a few kilometres from their roost site.

This is why white-tailed eagles are referred to as ‘sit-and-wait’ foragers. They would rather sit and watch for prey than make longer flights in search for food like golden eagles tend to do. This saves valuable energy, which is particularly important for young birds in their first winter.

Feeding on carrion
Our fieldwork indicates that the birds are finding plenty of carrion in the landscape, although one bird – G3 18 – is continuing to return to the release site on a daily basis to feed on the fish we’re still providing.

As the days lengthen in the New Year it will be interesting to see if the birds begin to wander further afield.

Although the birds are reared in pens with at least one other, they have no contact with the other young eagles during this period. This means that when they meet each other after release, it replicates the natural process of young eagles from different nests encountering each other.

Best of friends
The tag data shows us that the two birds frequently roost in the same copses, and sometimes even in the same tree, and we have had a number of reports of them tumbling with each other mid-air.

The project team were also told that they had been seen soaring with paragliders over the west Wight, which must be the most extreme sighting we have had to date!

The satellite data indicates that the two birds also soared together over Newport early in December, but it seems that they went unnoticed on that occasion.

Young sweethearts?
Although white-tailed eagles do not breed until they are around 4-5 years old, it is sometimes possible for pair bonds to become established much earlier than that.

G3 24 is a female and G2 74 a male, and so there is a chance that if the two birds survive the next few years, they may eventually form a breeding pair.

Spotted a white-tailed eagle?
Share your sightings with Steve and the project team:

Head over to Steve’s Blog to find out more

6 Comments on "Isle of Wight White-Tailed Eagles: Fascinating insight into the remaining birds"

Great to see the continued success of the Sea Eagle project, it must have been an almighty challenge just to get past the Forestry Commission’s & Natural England’s “baseline syndrome”. Perhaps during 2020 we might now also see the native White Clawed Crayfish restored to the island?

Vote Up25-7Vote Down
chard
I live in west Wales, where red kite are commonplace. I have never seen one attack crows or rooks. On the contrary, any kite that strays into corvids’ territory is promptly mobbed and seen off smartish! They feed mainly on carrion and road-kill and are pretty low in the pecking order if there is competition for this. I was delighted to spot a sea eagle near Freshwater… Read more »
Vote Up7-1Vote Down
ukdave

“…one bird – G3 18 – is continuing to return to the release site on a daily basis to feed on the fish we’re still providing.”

This is a concern. I wonder if, when they stop providing fish, there’ll be enough in the sea to sustain the birds. The Island waters have been terribly over-fished!

Vote Up21-16Vote Down
Tamara
Why are we worrying about crows? Corvids are doing very well – better than most other species of bird. They are very clever and adaptable.Rabbits and hares are in sharp decline, so the effects of large birds of prey on them need monitoring. But we do need top predators that were persecuted by man for so long until driven to extinction. At the same time we need… Read more »
Vote Up11-6Vote Down
wellsm

I suspect that people will regret this in years to come. Where I live presently the wretched red kites have more or less eradicated hares and rabbits (they eat the young) and they are doing their best to drive out the crows. It is surely always dangerous to introduce into an ecology a predator which itself has no predator.

West Wales is celebrated for its high density Red Kite population & also its buzzards; there was no noticable shortage of rabbits due to their presence in my twenty plus years living there & whilst I have often seen crows chase out hawks, I have never seen hawks harrass or do anything other than avoid crows, so that is interesting.