Joe Davies’ speech in Youth Parliament yesterday on the 50th anniversary of the decriminalisation of homosexuality opened with a dedication to the Isle of Wight Pride team. His rousing speech resulted in a standing ovation. 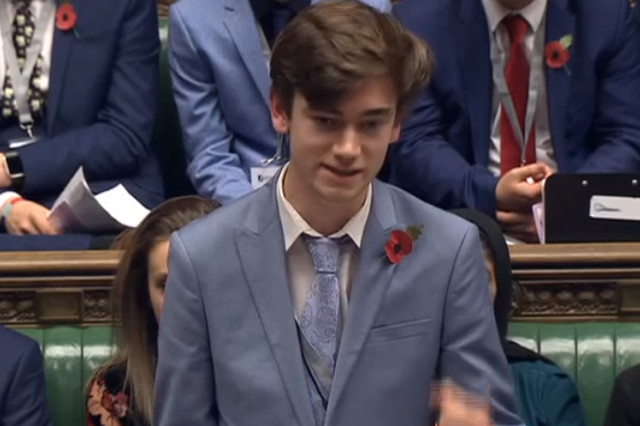 Congratulations to the Isle of Wight’s Member of Youth Parliament, Joe Davies, for his rousing speech in the House of Commons takeover yesterday (Friday).

Joe spoke on the 50th anniversary of the decriminalisation of homosexuality. He opened his speech by dedicating it to the Isle of Wight Pride team who, as reported earlier this month, have been selected to host UK Pride in 2018.

Davies: “We have not come far enough”
Joe’s speech resulted in a standing ovation from the house and was praised by the Speaker, John Bercow MP.

“This anniversary is a huge step forward, but we can never lose sight that we have not come far enough.”

Campaigns being taken forward
Earlier in the day, Members of the Youth Parliament voted to carry the following two subjects forward for campaigning in the coming year – ‘Votes at 16’ and ‘A curriculum to prepare us for life’.

You can watch all the speeches from the morning session on the Parliament Website. Joe’s speech in the afternoon session (jump to 15.46).

At a political level LGBT rights are well supported (in fact you are 6 times more likely to be an MP – unless you are Scottish who are more like 15x more likely)but at an ordinary social level there are still- as we have seen huge levels of intolerance which contributes(along with internalised homophobia)to massive levels of suicide, chiefly amongst young gay men.
Don’t be that guy,Don.

Mark: Nice to see you putting your name to your comment, it does make it more authentic.

Vote Up3-5Vote Down
Don Smith
Why do these people have to advertise their [part of comment removed by moderator]? I fully understand and accept that they need to be treated the same has everyone else, but by continually advertising their differences, they do their cause no good. Many years ago I admit that there was a great deal of ill treatment (e.g. Oscar Wilde), but thing have changed and for the better,… Read more »
Vote Up10-23Vote Down
middling

Perhaps the cause of equality continues to be pushed because of people like you, who in one breath refer to people as [part of comment removed by moderator] and in the next make nonsensical claims about the levels of societal bigotry.

How ironical that the question in your first sentence answered itself.

If you cannot see what is wrong with describing LGBT people as “these people” and as having “[part of comment removed by moderator]” then you are part of the reason *why* they need to “advertise” (as you put it).﻿

‘These people’! How else can I describe them, without using words that may offend. All words relating to LGBT can be found in the dictionary. I did not invent them. If everyone were like me the LGBT wouldn’t have any problems. I treat all people has I find them whatever their genders. Live and let live.

And the bit where you *did* use a word to describe LGBT people that was so offensive that it was removed by the moderator?