This exhibition focuses on a large body of meticulously crafted prints exploring the surface of the ocean, the vastness of the night sky, the darkness of deep space and the intricacies of a spider’s web. 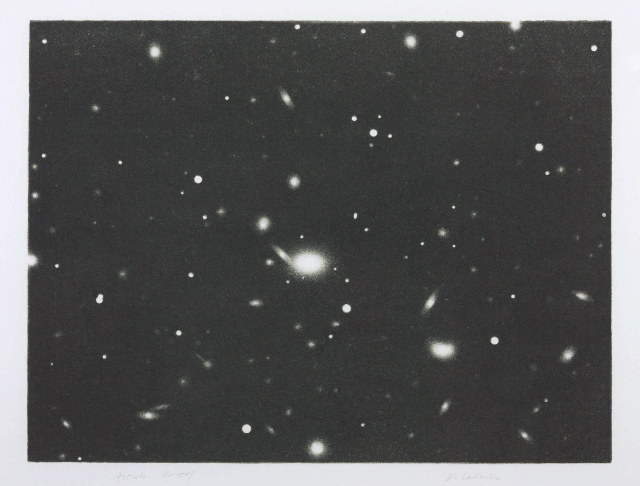 This autumn Quay Arts is delighted to bring to the Island a mesmerising exhibition of work by internationally acclaimed Latvian-American artist Vija Celmins.

On display in the West Gallery from 21st September to 16th November 2019, ARTIST ROOMS Vija Celmins is a partnership with National Galleries of Scotland and Tate and draws from the ARTIST ROOMS collection.

Recognised for her highly-executed drawings made using charcoal, graphite and erasers, and her practice in printing-making, Celmins’ delicate images are based on photographs of the sea, deserts, night sky and other natural phenomena.

Creating ‘impossible things’
The artist has repeatedly returned to these subjects throughout her six-decade career, bringing her acute focus to the seemingly limitless aspects of nature – from oceans and galaxies, to the intricacies of a spider’s web.

In 1966 she began to use photographs as the subjects for her works, creating what she described as “impossible images”, which remind us of the complexity of the simplest things.

Her concentrated and disciplined examinations make the viewer acutely aware of the process of looking.

ARTIST ROOMS: Vija Celmins
This exhibition presents thirty works on paper spanning 1975 to 2010, and draws from the extraordinary collection held in ARTIST ROOMS  – one of the largest museum collections of her work in the world, jointly owned by National Galleries of Scotland and Tate.

Background
Born in Latvia in 1938, Celmins emigrated with her family to America in 1948, and lives and works in New York. She has been the subject of over forty solo exhibitions and retrospectives.  Vija Celmins: To Fix the Image in Memory, her current major retrospective, co-organised by the Metropolitan Museum of Modern Art and the San Francisco Museum of Modern Art, the first in North America in more than 25 years, includes a selection of her drawings from the ARTIST ROOMS collection.

Response from young Islanders
A display of drawings and prints created by young Islanders aged 15-19 years, titled Vija Celmins: Reflections will open in the Clayden Gallery from the 28 September until 16 November.

Young participants have worked alongside Island-based artist Caroline Underwood to explore Celmins’ drawing and printmaking practice, responding to the local landscape of the Isle of Wight and the River Medina.  This project, which was free for participants to take part in, has been made possible through the ARTIST ROOMS programme with Art Fund and Arts Council England support.

Where and when
ARTIST ROOMS: Vija Celmins takes place from 21st September to 16th November 2019 in The West Gallery, Quay Arts, Newport, Isle of Wight.

The opening event takes place on Saturday 21st September between 6pm-8pm. All welcome.

Our thanks to Tate for sponsoring for this feature. They and other businesses and organisations taking paid promotion enables you to continue reading OnTheWight for free.

Filed under: Island-wide, Newport, The Arts, What's On