The prestigious Pearl Izumi Tour Series – one of the UK’s leading televised cycle races – will be bringing action and excitement to the town of Ryde on the Isle of Wight in May this year. 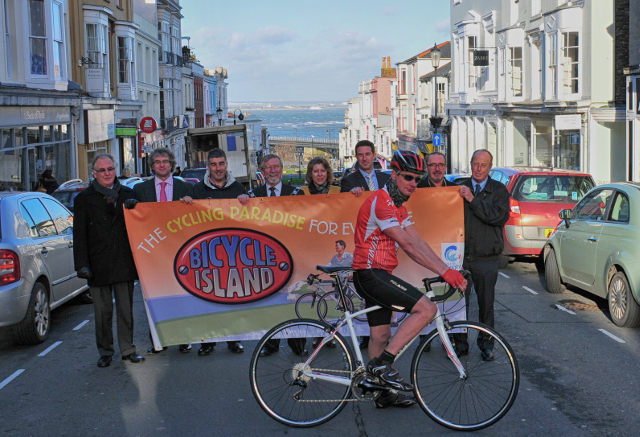 This in from Visit Isle of Wight, in their own words. Ed

Visit Isle of Wight (VIOW), the Isle of Wight Council and Island Roads are pleased to announce that after months of negotiation, they have been successful in their bid to host one of the stages of The Pearl Izumi Tour Series – one of the UK’s leading televised cycle races, bringing action and excitement to the town of Ryde on the Isle of Wight.

The Pearl Izumi Tour Series – put together by the same team behind the organisation and promotion of Tour of Britain – brings together the very best in British professional teams and high-profile, celebrity riders, competing on town and city centre circuits in front of packed crowds as a part of a full day of cycling activities.

Highly popular and competitive event
The main, team-based race, which is open to ten teams comprising of five professional cyclists, is a highly popular and competitive event. Registered entrants have the chance to ‘test their mettle’ around the circuit and against the clock. The team with the fastest lap times will be presented with winners’ medals on the professional podium!

Taking place at ten venues around the UK in May and June, the star-studded sporting event will use a circular route around the town on Thursday, 14th May. Ryde town centre will be converted into a professional race circuit giving residents and visitors an adrenaline-fuelled glimpse of Britain’s top professional cyclists battling out in our streets.

“Attracting high profile events like The Pearl Izumi Tour Series is only possible because we have Visit Isle of Wight, our own destination management organisation (DMO) building partnerships and opportunities.

“This single event should deliver approaching £750,000 of media value and visitor spend this year alone.

“Winning the bid to host the race on a Thursday rather than the usual Tuesday is a major coup for the Island as it provides an opportunity to build long weekend business in mid May.”

“It is very pleasing we have been able to secure this prestigious event to come to the Isle of Wight in such a wonderful location. The council recently secured nearly £1 million under the government’s second Local Sustainable Transport Fund and the money is being used to support local initiatives and projects such as ‘Bicycle Island’ to encourage people to leave their cars at home and use sustainable transport.

“Part of the LSTF grant can be used to support local events and we are delighted to be supporting such an important sporting occasion using some of the funding, because major sporting events such as the Pearl Izumi Tour are shown to inspire people take part in recreational cycling.

“Elsewhere the tour has attracted thousands of spectators and I am sure local residents will come along and support this event and join in the fun. It is also a great opportunity to celebrate the Island as a place where people want to live, work and visit.”

“We are excited to be bringing the Pearl Izumi Tour Series to Ryde and the Isle of Wight, which will be the first, not just for the Series, but also for one of SweetSpot’s event. We are sure that residents from across the Island will be excited by the chance to watch Britain’s fastest teams in action, and hope lots of fans travel with us to enjoy the race in a beautiful setting.”

Televised racing
The team-based, cycle race series, which attracts thousands of spectators, will be televised the following evening on sports channel ITV4, bringing action-packed and exciting team-based racing into living rooms across the UK.

The Pearl Izumi Tour Series is being funded by VIOW and LSTF – the project which aims to improve and promote the Island’s sustainable transport network – with support from Island Roads, Ryde Town Council, Ryde Business Association, Southern Vectis and ferry operators Wightlink and Red Funnel.

The staging of the event, which follows months of negotiation led by VIOW, will cost just over £90,000 – a joint investment of £27,250 by the DMO and partners, £45,000 from the LSTF fund and a cash equivalent of up to £20,000 by other partners including Island Roads.

“As an Island company passionate about improving the highways network for the benefit of all road users, we are delighted to be playing our part in supporting this high profile event which will bring both positive publicity and an economic boost to the Island.”

With a wide range of community activities and support events planned for the 14th May, plus the main Pearl Izumi Tour Series race at 7.00pm, there’ll be plenty to see and do for local residents and visiting spectators alike.

The race route and full schedule of events will be available by the beginning of April.

Nice to see Island Roads grabbing some credit for doing what they are already being handsomely paid to do! Other than that – great job by Bicycle Island.

I hope none of the cyclists hit that huge pothole the green car in the picture is covering. Way to go Island Roads!

A great tourism coup.
We will all have our “avoid this road” etc.,
Hopefully they will avoid Castle Street (parallel to The Esplanade) unless they want a switchback ride – that road is awful. Promises to sort it by IR have gone away.

Shame it’s on a Thursday during term time.

Hopefully some of the events will be scheduled for the evening when more people can get there.

On the whole though a good news story. Years ago there were a few events like this in Ventnor (1984ish?) but they ceased at some point. A story went round it was because the cyclists found Ventnor’s topography too challenging!