After Blue Seas Protection highlighted their difficulties getting a berth for their new boat in Ryde Harbour, the council are now seeking ways to have their boat, anchored outside the harbour, removed. 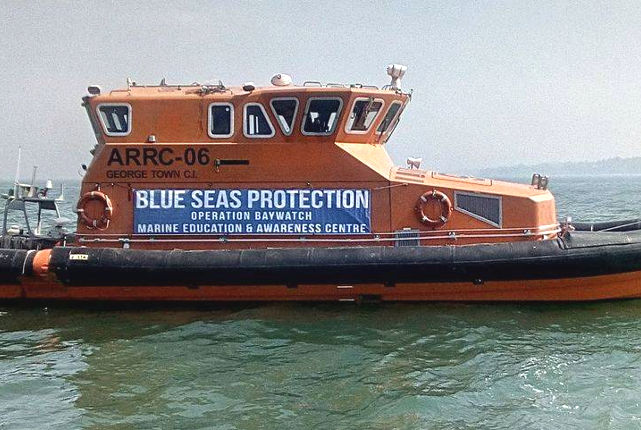 The owner of a boat anchored at Ryde Sands without permission continues to ignore repeated Isle of Wight Council requests to move the vessel.

The local authority had given Blue Seas Protection — which the council understands is not a registered charity — until Sunday (12th May) to move the 28-ton vessel from its land, close to Ryde Harbour.

The group was warned the council reserved the right to move the craft to a secure location should it remain there after this time.  However, no response was received from the owner.

Officers contacted Blue Seas Protection last week outlining their concerns over the security of the vessel and the potential for it to become a hazard to navigation.

Bought boat without permission for berth
The council would like to reiterate the group did not seek permission to use the harbour as a permanent berth for the vessel prior to its purchase.

There are a number of other harbours on the Isle of Wight that may be able to meet their needs.

Would reduce space for visiting boats
Berthing of the 19-metre boat in the area proposed would reduce the number of available visitor berths at Ryde Harbour during the peak summer season and would impinge on the movement of adjacent vessels.

A winter berth has been offered to Blue Seas Protection although this would not be available until 1 November 2019 and would need to be vacated by 31 March 2020.

Uninsured craft
The council notes the group already has one boat in the harbour which is not being kept in accordance with the terms and conditions of the harbour, in that it has not demonstrated the craft is insured.

The council also understands, that while Blue Seas Protection has applied for charitable status, it is not yet a registered charity or recognised as a constituted charitable trust by the Charities Aid Foundation.

Dare I say, I’m on the council’s side on this one, based on what I’ve read. Nothing against the aims of Blue Seas Protection, but we need charities which are able to do their work competently and I have doubts about them.

Vote Up18-4Vote Down
honda
All this news is fake news ! in this news article Firstly Ryde is a harbour / marina with a berthing capacity of 200 berths ,there are 68 berthed now. So plenty of capacity for locals and tourists boats . The berth we asked for astern of our other boat has been empty for 4 years plus so good revenue for council every bodies happy. We have… Read more »
Vote Up7-6Vote Down