Isle of Wight’s Wyatt & Jack are responsible for the Inflatable Amnesty movement, which is spanning the globe and now boasts their biggest single haul, the 5.5 tonnes of life-size inflatable Stone Henge, created by world-renowned artist, Jeremy Deller. 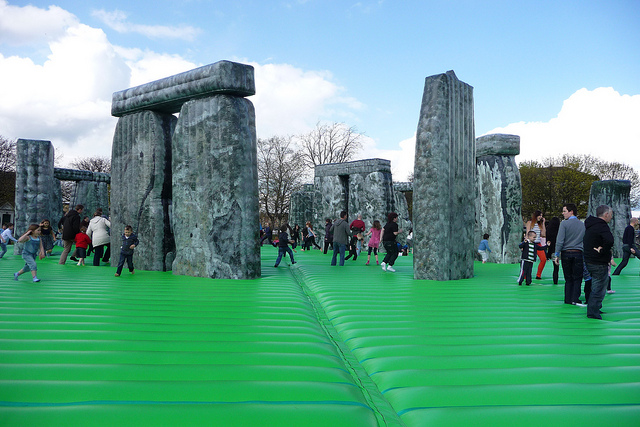 Readers might remember the passing comment back in January about Isle of Wight small business, Wyatt and Jack, having a “life-size inflatable Stone Henge, hidden away in a secret location“.

Well, we can now reveal a bit more information about this incredible 5.5 tonnes of plastic, which because of Wyatt & Jack’s Founder and Director, Georgia Lovell’s passion to prevent plastic going to landfill, will, over the coming months, be made into bags and accessories.

Sacrilege [2012] by Jeremy Deller
The life-size Stone Henge is actually an artwork by the world renowned artist, Jeremy Deller and was made by the same company that made the very first bouncy castle.

“A co-commission between Glasgow International Festival of Visual Art and the Mayor of London, the work was enormously popular when, supported by Creative Scotland, it appeared in Glasgow in 2012. With support from Arts Council England it traveled around the country as part of London 2012.”

We recommend popping over to Georgia’s blog to read the full story of how the life-size inflatable Stone Henge ended up in her hands.

Inflatable Amnesty
The acquisition is part of Wyatt & Jack’s incredible Inflatable Amnesty – a movement that has spanned the globe – the response to which Georgia told OnTheWight she was “blown away” by.

Since July 2018 the company has managed to re-purpose around 15 tonnes of “broken inflatable weirdness” (not including Sacrilege).

See it in action
Hear from Jeremy Deller about the process of creating the piece here:

The artwork has travelled the world – check out this video from Sydney:

See them in person
If you haven’t seen the products that are created by Wyatt and Jack, why not pop along to the flagship store in Union Street, Ryde. Check their Website for opening times.

If you can’t get to the store, all the products are also listed on their Website.

Get in touch
There are now at least 21 drop-off points (including Majorca) where you can leave your unwanted inflatables and they’ll be sent onto Wyatt & Jack. If you want to find out where your nearest drop-off point is pop over to the #inflatableamnesty map or if you have a question for the inflatable superheroes, write to [email protected]

Image: yellowbookltd under CC BY 2.0