Many thanks to VB reader Darran Gange, who got in touch when he spotted former chief executive of IOW Council Joe Duckworth in the papers again.

As VB readers will know, Joe Duckworth left the Island in 2008 for Newham council where he was welcomed with a £240,000 annual salary, before leaving last month amidst a storm of controversy.

On a salary like that it was little wonder that he made it into the Sunday Times ‘The 100 Club’ feature on ‘Town Hall Top Earners’ earning over £200,000, of which there are currently 30 people.

They report that by the time he left the London council, Duckworth was earning £281,085 a year, putting him at number four in the list.

Wandsworth top of the pile
He’s got a lot of catching up to do before he reaches number one though.

That position is held by Gerald Jones from Wandsworth council, who earned a staggering £356,891 in the last year!

There was a time when Wandsworth residents enjoyed zero council tax. Long gone are those days and it’s no surprise given their chief exe’s salary. 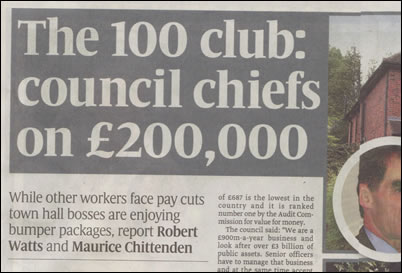 Is that really what they earn, when our nurses and ambulance people and firemen and all the really life saving services earn so much less,i cant beleive it , i never knew that .

They say you can only fool all of the people for some of the time – perhaps that’s why he moves on so regularly?

He must be amazing at interviews. Doesn’t quite seem to impress after they actually take him on thou?