Join workshops for Dark Nights Parade and Pageant under the stars

This spectacular pageant will feature Medusa, Bacchus, Orpheus and the inimitable Cockerel-headed man. Join the lantern or puppet-making workshops to join the parade 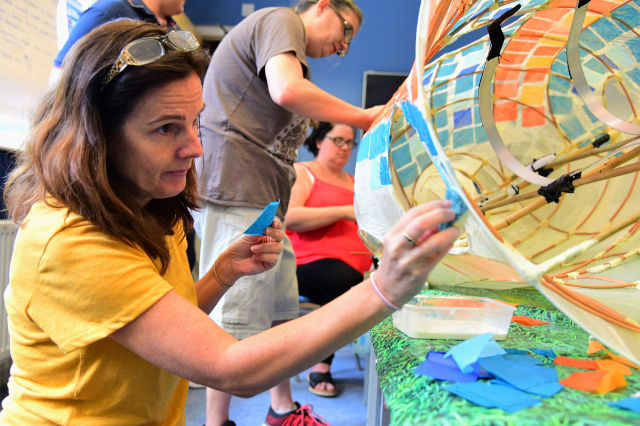 The New Carnival Company will be presenting Dark Nights at the Villa in Baading on Saturday 16th November.

This new and free outdoor arts event will combine a spectacular illuminated street parade with the community enactment of a fairy tale pageant.

“The storyline has been written by local schools and community groups, and been inspired by the famous Roman mosaics of the Villa.

“This spectacular pageant will feature Medusa, Bacchus, Orpheus and the inimitable Cockerel-headed man.

Down to the Coast
The event is part of the East Wight Landscape partnerships ‘Down to the Coast’ project, which aims to engage local people in the understanding and celebration of their local landscapes and heritage.

Lantern-making workshop
On Saturday 9th November at Brading Town Hall from 2pm to 4pm you can join a community Lantern workshop to make a lantern for the parade for a small charge of £5 per lantern.

Adults can drop in from 10am to 4pm on Tuesday 5th and Wednesday 6th November at Brading Youth and Community Centre.

Join or watch the parade
The parade on the 16th, starting at 6pm at Brading School, will see families carrying handmade Roman-style torches and illuminated costumes leading into the outdoor pageant, which begins at 6.45pm at Brading Roman Villa.

Contact the New Carnival Company for further information about workshops and the unmissable Dark Nights event.