Just Seventeen’s 1986 Isle of Wight spread: Do you recognise anyone in the photos?

Did Donna become a model? Did Lisa make it to Africa? Does Edward still like “interesting girls, ones who’ve got something to say”? Help us identify these young Islanders from 30+ years ago who appeared in the 1986 Just Seventeen double page spread. 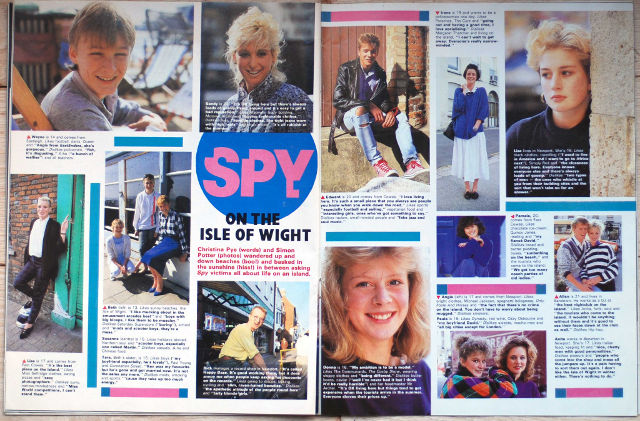 What was so special about that spread? Well it was a fantastic snapshot of young people from the Isle of Wight sharing their likes and dislikes.

A brief moment in time
There are some absolute gems, such as Wayne (14) referring to Norwegian band, A-ha, as “a bunch of wallies”, or Sandy (22) who likes, “Magnum and body-building”, but dislikes, “tight jeans worn with high heels”.

We’re particularly fond of Edward (20) who likes, “interesting girls, ones who’ve got something to say”, but dislikes racism and small-minded people.

Irene (18), said, “I can’t wait to get away. Everyone’s really narrow-minded.” Did she make it off the Island? Pam (20) wasn’t happy about the coaches loaded with “parties of old ladies” and Anita (17) worked in Benetton but didn’t like “poseurs”.

Paula’s (19) boyfriend, David, was probably relieved to see he was in her likes section, rather than dislikes and we wonder whether Donna went on to become a model.

Do you know anyone featured?
The spread has already been making its way around Facebook, but we thought we’d help out by sharing here and seeing whether any OnTheWight readers recognise those featured.

Perhaps you even appear in it yourself. Do let us know by leaving a comment below. 2 Comments on "Just Seventeen’s 1986 Isle of Wight spread: Do you recognise anyone in the photos?"

newest oldest most voted
Paul Fuller
Yes! Rick East (from Happy Daze) lives in Gurnard nowadays. Top bloke. Gave me a hard time when I was a teenager as I loved crap music. Gave me a harder time when I started Djing… Still rides his bike. I went through High School with the lovely Lisa Brinton (17 from East Cowes…). Lisa went on to teach. Met her again at Cowes High a few… Read more »
Vote Up110Vote Down
Sally Perry