Island Labour had a hand in drafting a motion on fundamental reform of schools that was passed at the National Conference in Brighton. 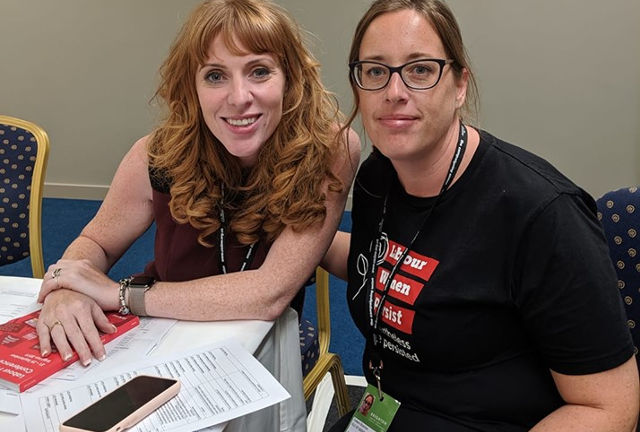 Island Labour’s motion to call for the fundamental reform of the schools system was yesterday (Sunday) passed by the National Conference in Brighton.

The Island party’s motion was one of a number on education which were combined in a negotiated process called “compositing”.

Island Labour’s Colleen Brannon (pictured right) was one of the delegates working with shadow Education Secretary Angela Rayner (pictured left) to draft the final motion. This produced a final motion which went to the main floor of the conference, where it was passed.

Restoring public ownership and oversight to all schools
The national media has focused on the commitment to remove private school tax breaks, as wealthy, privately-educated journalists have leaped into action to defend the privileges they benefit from. However, the motion which was passed contained more significant policies.

In particular, Labour committed to restoring public ownership and oversight to all schools which have been ripped from their local communities and handed to unaccountable private companies by the Tories.

The restoration of effective local accountability will prevent any repeat of the attempted closure of schools like Sandown Bay. It will also remove the ridiculous salaries of the executives of the academy firms, who have been enriching themselves at the expense of our children.

“As someone who taught for over a decade, this is very close to my heart, and I’m delighted that Labour has embraced this policy. The fact that Island Labour directly contributed to the motion makes it all the sweeter.

“Education is such a vital public service. Yet over the last decade it has been ripped apart by the same dishonest ideologues who now rule in number ten.

“Dominic Cummings, now Johnson’s chief of staff, was Michael Gove’s sidekick when they misused anti-terror legislation to force through the most outrageous vandalism of a public service this country has ever seen. Billions of pounds of public money have been transferred from us, the people, into the hands of private organisations, many with connections to the Conservative Party.

“It’s time we had our schools back. And the next Labour government will deliver them to us.”

newest oldest most voted
Colin
Quote “The restoration of effective local accountability will prevent any repeat of the attempted closure of schools like Sandown Bay.” No it won’t. The IWC is trying to close one out of five West Wight schools at present. I seem to remember that it was Tony Blair and the Labour government in 2000 who introduced academies; David Blunkett was Education minister and the now Lord Adonis (who… Read more »
Vote Up22-5Vote Down
Mark L Francis

The Labour Party is now a different (and very much bigger) party than it was under Tony Blair & his chums. It has moved on.

“Billions of pounds of public money have been transferred from us, the people, into the hands of private organisations” – right, so nothing like the billions of off balance payments in PFI then.

Vote Up40Vote Down
greenhey
Indeed.But contrary to common perception Labour did not invent PFI. It inherited it, and was stuck then in the dilemma that if it stopped it, its opponents would claim Labour had stopped building hospitals. If you want to look at public money going to private hands, try housing benefit. When we brainlessly stopped council house building in Thatcher’s time , initiating the tide of debt which culminated… Read more »
Vote Up13-2Vote Down
iain mckie
I totally agree, but Labour took it to stratospheric levels. They also made some exceptional flawed funding decisions (not saying Tories wouldn’t have done the same) like Metronet, NHS IT, ID cards programme, Single Farm Payments, Quinetic, HMS Boondoggles,HS2 etc which drained the taxpayer of hundrerds of billions which they are trying to salvage via QE to keep their noses above water. The last people I would… Read more »
Vote Up2-1Vote Down
Colin

You have to laugh at labour nationally. Todays little gem is John Mcdonnell proposing a 32 hour week. Is it any wonder that they are unelectable with such pie in the sky schemes?

You would no doubt have said the same about a 40 hour week 100 years ago.

At the financial regulator where I worked it was a 35 hour week. 25 days annual leave. But if you did extra hours you could earn an extra two days a month leave. And the office was shut between Christmas and New Year. 53 days holiday per annum. The public sector takes the mickey out of the taxpayer.

Private tax avoiders take the mickey out of the taxpayer.

If the taxes are to pay for bloated salaries and useless projects who can blame them? If profits go to expansion of the business and fund investment and employment, and if the dividends go to fund pension funds isn’t that a better deal?

However, I wonder how Labour are getting on ‘respecting the referendum’ (2017 manifesto promise) in today’s Brexit debate ? If they continue to support a second referendum Labour are finished in many Labour areas, let alone ending any hope on the Island.

Vote Up10-10Vote Down
chrissy2712
“I seem to remember that it was Tony Blair and the Labour government in 2000 who introduced academies; David Blunkett was Education minister and the now Lord Adonis (who wants a private Solent tunnel)was instrumental in the policy. Or is that a different labour party? lol. Labour seems to have policies both for and against everything these days. lol lol lol] COLIN: yes indeed it was a… Read more »
Vote Up4-4Vote Down