Letter: Brexit is bad for your health, wealth and a tolerant society

Speaking from a position of knowledge, Nick Stuart says there’s no chance of creating new trade deals around the world that will even begin to replace the damage of Brexit. 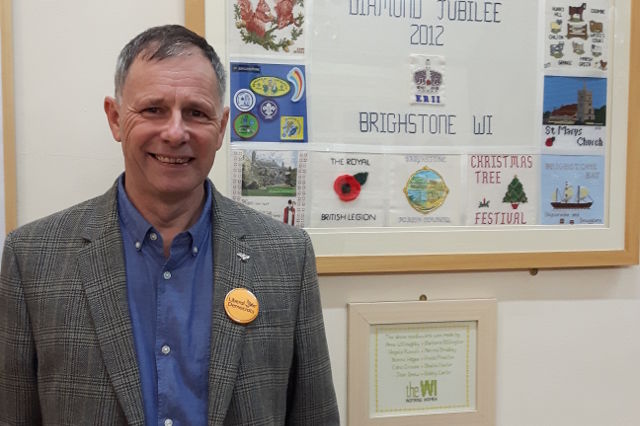 This letter from Leader of the Isle of Wight Liberal Democrats Nick Stuart. Ed

Our MP, Robert Seely’s stance on No Deal Brexit is a solid political decision, slavishly following the party line.

He recognises that a majority of Islanders voted for Brexit (62% of those who voted) after a lying crooked Leave campaign and calculates accordingly.

In spite of the many cross-party Islanders taking part in the million-strong march in London for Europe for a final third vote on Europe.

Is it any wonder that the public, focused on day-to-day struggles, know little of the massive advantages of the largest common market in the world for industry, jobs, environmental protection and safety.

Trade deals and safety tests
One example is the cross-Europe push for standard safety tests on cars and pollution that have helped the UK build one of the strongest car industries in the world.

But it’s OK for Bob to vote for a no deal which will smash the Europe wide supply base and market. Oh and as an aside, I know from my previous role supporting UK trade there is no chance of creating new trade deals around the world that will even begin to replace the damage of Brexit.

Brexit bad for your health, wealth and a tolerant society
The Liberal Democrats have a proud role standing for fairness and the interests of the everyday Briton. We will carry on putting the evidence in front of the public as we watch our economy and society become poorer and meaner under a deaf PM and a lickspittle MP.

Your readers might like to remind our MP, very politely, that Brexit is bad for your health, wealth and a tolerant society!

17 Comments on "Letter: Brexit is bad for your health, wealth and a tolerant society"

newest oldest most voted
davimel
‘The Liberal Democrats have a proud role standing for fairness and the interests of the everyday Briton’… Unless you fell for the University tuition fee fiasco of course… the Scandals and ignoring the DEMOCRATIC process don’t help much either, but if yet another remoaner says it.. it must be true.. Cos we is cleverer than you! Just another minor party trying to jump onto the ‘kick a… Read more »
Vote Up32-22Vote Down
profoundlife
To be fair, they’ve sorted out the Jenny Tonge aspect of the party, but the issues around sexual impropriety never seem to go away. The Lord Steel issues follow on from the Lord Rennard issues, follow on from the Lord Lester issues, follow on from the Cyril Smith issues, follow on from the Jeremy Thorpe issues… that’s getting away from Brexit policy, but be careful Lib Dems… Read more »
Vote Up17-5Vote Down
oldie
Disagree. Our MP has been voting to reflect the results of the Referendum which on the Island was 62% vote Leave the EU. Unfortunately we have a Remainer Prime Minister who was not a good negotiator. If when she triggered Article 50 she had said to the Eu leaders we’re coming out on World Trade /No Deal terms unless you can offer us something better they might… Read more »
Vote Up39-30Vote Down
hialtitude
I read recently about the pending closure of the Honda factory in Swindon, folks in Swindon voted leave too, 55% I believe. The workers and residents have marched, in vain I might add, to keep the factory open. Honda say it is merely restructuring its operations, that Brexit is not to blame. Would this closure occurred without Brexit, who knows, but it certainly won’t have helped. I… Read more »
Vote Up28-21Vote Down
davimel
Can I just point out that Honda have stated over and over that the decision to close Swindon is entirely due to the huge downturn in worldwide sales, especially in China, AND the growing demand for Electric vehicles Worldwide AND the decision of the UK government to BAN new Diesel vehicles from 2025. These decisions were helped by a new agreement between the EU and Japan to… Read more »
Vote Up25-17Vote Down
hialtitude

You can state it as much as you like, but if you imagine that Honda closing its factory in Swindon and Brexit are unconnected then you are mistaken and deluded.

Here are some figures that show job losses and lost tax revenues since the Brexit disaster began. They make pretty grim reading.

Vote Up24-17Vote Down
profoundlife
That’s gave me a real chuckle. Checked out the site and the methodology. Seems to include anything he wants to! “Roger took early retirement and he was doing the work of two people, so I’ve marked that down as 3 job losses.” There’s a reason economics has a proper methodology. For one thing, he’s missed the most basic thing – there are alternatives! People have other jobs!… Read more »
Vote Up10-8Vote Down
hialtitude
I rather like it, it is how small business sees things, their view from trenches, so to speak, it is equally as valid, perhaps more so than say S&P who today said. ‘The United Kingdom has lost 6.6 billion pounds in economic activity every quarter since it voted to leave the European Union’. S&P being Standard and Poor, a rather well respected and major financial player. Goldman… Read more »
Vote Up8-16Vote Down
iain mckie

The same Standards and Poor who took a $1.5 billion fine for their ratings of sub-prime assets? Good reference to choose (not) https://www.reuters.com/article/us-s-p-settlement-idUSKBN0L71C120150203

Well here is a link to the the original Reuters article.

You could always complain to S&P and Goldman Sachs if you feel that their assessment is incorrect.

And here is some background on Goldman Sachs on the EU https://www.independent.co.uk/news/world/europe/greek-debt-crisis-goldman-sachs-could-be-sued-for-helping-country-hide-debts-when-it-joined-euro-10381926.html

Both seem to be a perfect match for the needs of the Governments attempts to keep us in! No real suprises though.. whenever a Government starts looking for ‘help’, loads of companies seem happy to get sticky fingers, and poor memories.

Vote Up5-4Vote Down
annia
Bob in a recent interview highlighted the need to make sacfices regarding Brexit to get is to the next stage without a no deal to work on making it happen. He then went on to vote no on every option barre a no deal so is far from practicing what he preachers. I don’t have the background to comment on the economy but work in the Health… Read more »
Vote Up15-8Vote Down
Mark L Francis

Will David Davies be in Berlin negotiating a separate trade deal the day after and will it be the easiest in human history? See Boris “so-called” Johnson (in the words of Peter Hitchin) &co have gone quiet over there.

Vote Up10-3Vote Down
garyeldridge
Utter Tosh – how can anyone KNOW and state what the future holds, exactly. The usual scare-mongering, which was trotted out in the early days of the Brexit process and signally proven to be way off the mark in reality, as the UK had done rather well economically in the interim, unlike the EU. Brexit for me was always about who governs the UK. Trade was and… Read more »
Vote Up18-13Vote Down
profoundlife
Bad for a tolerant society? What nonsense. One of the problems of remainers is that they think everyone is as wound up as Nigel Farage is about immigration. UKIP peaked at about 12% in the polls, and that feels like what I experience in the country – about one in ten people have a real bee in their bonnet about immigration. It’s not more than half. So… Read more »
Vote Up21-17Vote Down
denbo17

“Nick Stuart” . You are reverberating extremely large inexactitudes. Give us a break please.