Independent Labour councillor, Geoff Brodie, shares his views on the outcome of the 2019 General Election 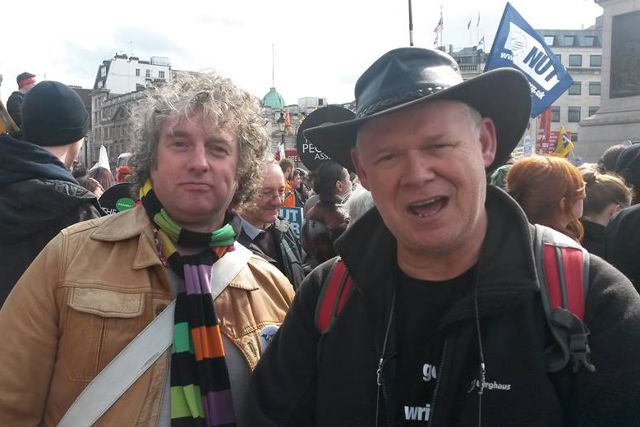 So the country faces five years of a Johnson-led, Tory government and Bob Seely has been returned as our Tory MP. No surprises there then.

Well done to Richard Quigley for an excellent and improved Labour performance. And maybe, just maybe, we might get an apology from Vix Lowthion and her few remaining Green acolytes for the way they have mislead some people into thinking they are the main challenger here at the last two general elections. Including that sorry bunch, the local LibDems.

Support for Quigley
Although not a member anymore I did some supportive work for Richard Quigley in my ward over the last month, endorsed his candidature by letter to all residents, and spent a large part of yesterday outside our polling station with a red rosette and very damp clothing.

I never miss a chance to chat with my residents, no matter the challenge.

National disaster for Labour Party
Labour’s performance nationally has been a disaster, but something I have seen coming since the EU referendum in 2016. By disrespecting heartland voters to keep its members happy, against the leader’s instincts, Labour has now lost seats in my native North East that they have held since the 1930s.

I have old friends in County Durham who will now find out for the first time in their lives what its like to have a, probably largely absent, Tory MP.

Support for Leave campaign
Locally I am the only Labour-badged person to have been elected in getting on for seven years.

And my personal support for Leave helped that in 2017 and was the beginning of my departure from Labour as the local party fixated on Remain.

You do that by listening to people; not blaming or ignoring them.

Filed under: Election, Island-wide, Letter to the Editor, Politics

14 Comments on "Letter: ‘Labour Party must reconnect with voters to recover from disaster’, says Labour councillor"

newest oldest most voted
Alternative Perspective
The truth is Labour did best under Tony Blair when it commanded the middle ground of politics, and was more of a soft Conservative Party than hard left Labour Party. The electorate have firmly rejected the extreme left, and it is interesting the Conservatives are now talking about being a ‘one nation’ party, they will now move quickly to regain the centre ground, denying Labour that opportunity,… Read more »
Vote Up40-10Vote Down
Geoff Brodie

As evidence for my main argument I have just come across a list of all the Labour seats lost on Thursday. All but 4 were Leave voting in 2016. The majority of Labour members are culpable in this debacle, including locally.

Vote Up14-10Vote Down
susan
The truth is Geoff, this election was to do with Brexit and democracy. The people were asked in a referendum did they want to stay in, or leave the EU, The vote was to leave. The LibDems manifesto was to remain, the Conservatives was to abide by the democratic mandate and leave. Labours was to remain or leave with a deal that was so closely aligned that… Read more »
Vote Up22-6Vote Down
Geoff Brodie

Vote Up8-4Vote Down
Better Red than Bled
So now you think it was Brexit and not the “loonie left”. That’s progress, if you could just acknowledge that the “loonie left” (I think it is loony btw) have been promoting a set of policies that would be considered centrist in most European democracies we could square the circle, and get on with working towards a better society by electing a labour government with policies that… Read more »
Vote Up11-7Vote Down
susan
Boris Johnson has already visited the Northeast to thank Labour voters for voting Conservative. If the Conservatives now invest in these areas it will create a situation where these previously secure Labour constituencies will be lost to Labour for generations. Labour will find itself trying to climb an impossible mountain. The longer Corbyn hangs on, and should the party elect a new leader from the ‘loonie left’,… Read more »
Vote Up10-7Vote Down
Geoff Brodie

The Tories haven’t bothered with the Island for the past 9 years that they have held it and been in government and I doubt anything will change.

In 5 years time all the northern seats will return to Labour as it won’t be about Brexit.

Well, interestingly, precisely what I was suggesting would happen has just been announced Geoff

What I suggested would happen ironically has just been announced.

The next phase of political entertainment will be, who will the Labour Party select as it’s new leader?

Many of the women being touted I think will simply get up the electorates nose, and of course it will be like the kiss of death for anyone pushed forward by Corbyn. I don’t see a natural successor in any of the likely candidates frankly.

Vote Up11-9Vote Down
Better Red than Bled
We didn’t have to wait long for the supporters of Progress and the rump of “New” Labour to come out and point the finger at Corbyn. Has it not occurred to them that apart from Brexit the biggest problem Labour faced was the constant demonisation of the twice elected leader by the media, egged on by the Israel lobby and constantly fed material by MP’s who never… Read more »
Vote Up15-22Vote Down
Geoff Brodie
I also agree with this. If Labour has respected the referendum, as they said they would in 2017, this election would have been about policies, not Brexit. Corbyn is naturally, like me, anti the political union with the EU. His party membership though and his London-centric shadow cabinet pushed him into the dog’s breakfast that was labour’s Brexit policy this time. Hopefully politics can now get back… Read more »
Vote Up11-9Vote Down
susan
Since we are having a reality check, you missed out one important item on your list, defence. Many of the British voting public, rightly or wrongly, simply do not believe the Labour Party would defend our Country in our increasingly turbulent world. That’s another key reason why many of the electorate chose not to vote Labour. Being strong on defence does not mean you have to be… Read more »
Vote Up12-9Vote Down
tr2015

Sad? not at all. this is the penalty you pay when you consider your electorate stupid. They could sell tickets for the fall out that is to come…..