Letter: One per cent pay rise for NHS staff ‘a heinous and reproachable act’

This reader shares an open letter to Matt Hancock and Bob Seely urging the Government to reconsider the proposed 1 per cent pay rise for NHS staff. He says many have lost their lives protecting us and those that have survived, may have lost their peace of mind 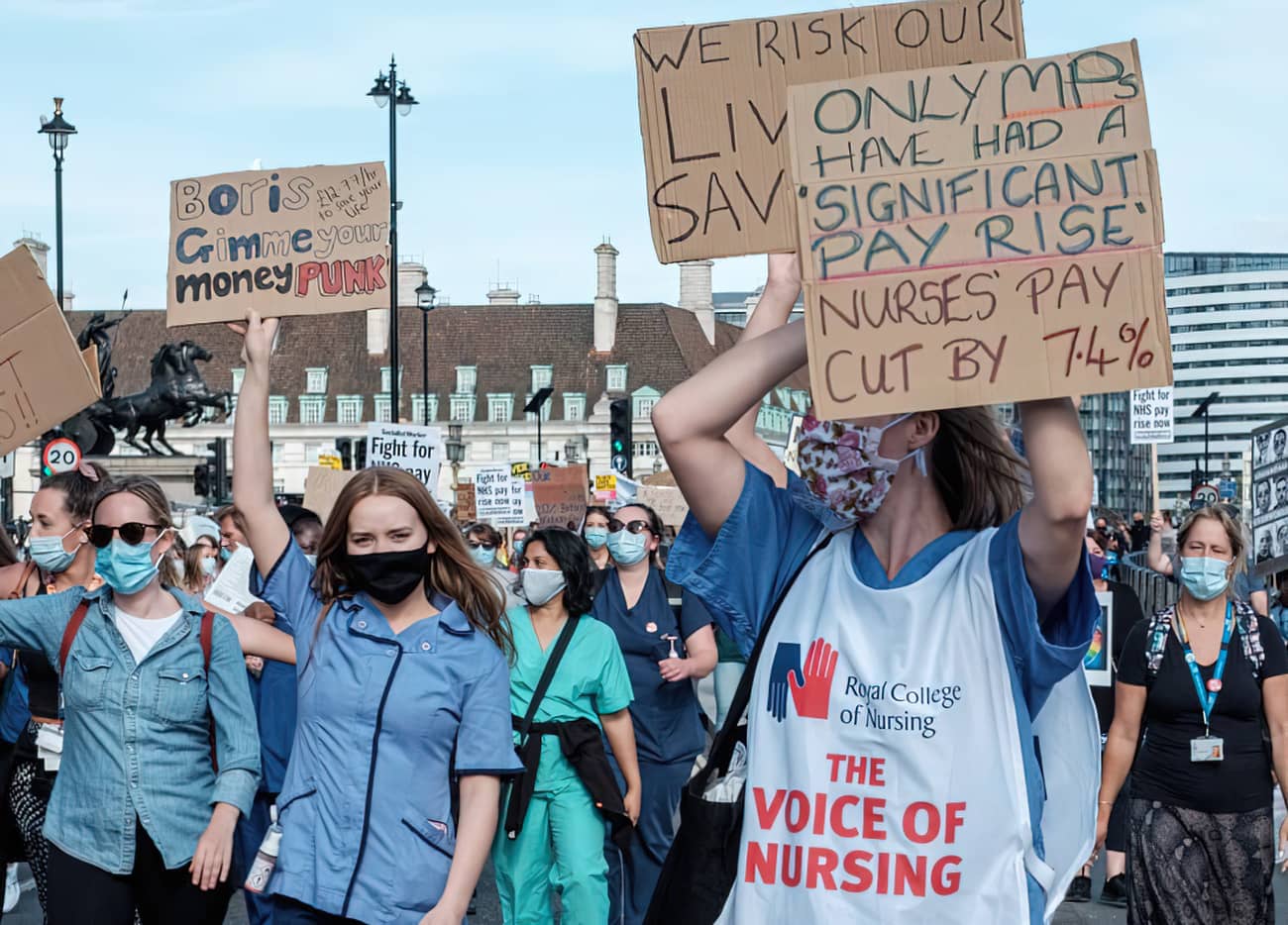 I had, up until now, been quite impressed with the way you, Matt, had led the NHS through the pandemic.

However, I am now stunned and appalled by what I perceive to be an extreme lack of judgement, ungratefulness and foresight that has resulted in the belittling of the sacrifices made by our NHS staff.

I refer of course to the “reward” of a depreciating and vanishingly small 1 per cent, a miserly act I believe more worthy of an unreformed Silas Marner than a Government Secretary of State.

Has the Government learned nothing over the last year?

Does the Government, even now, not yet realise how invaluable the NHS is to the people of Britain?

Have they already forgotten the hundreds of NHS staff who have already lost their lives protecting us, and those that have survived, but will have mentally lost their peace of mind?

Does the Government not yet realise that this heinous and reproachable act now places them completely out of step and at odds with the feeling of the people of our nation?

I urge you to reconsider.

28 Comments on "Letter: One per cent pay rise for NHS staff ‘a heinous and reproachable act’"

newest oldest most voted
alaniow
Well, While Johnson carries out his vanity projects 2.5 million on a No 10 News Room, Personnel PM’s Union Jack plane. Daily Express reports today ” real Gold embossed wallpaper in the No 10 flat paid for out of Tory funds so he can show british design at it’s best. He is obviously going to allow the outside world into his bedroom. God save us all from… Read more »
Vote Up110-29Vote Down
uosf9

Vote Up69-25Vote Down
Steve Goodman
Not forgetting the very controversial costly and damaging multi-billion pound HS2 vanity project (more in a link to follow), and all the money thrown at government friends and greedy private sector providers who mostly spectacularly failed to provide what was promised prior to and during the pandemic, and Boris’ big NHS money lie on the side of a bus, and our local politicians’ sneaky pay rise featured… Read more »
Vote Up97-21Vote Down
Steve Goodman
HS2: The costs to taxpayers, potential passengers, and our environment are far too high, and the claimed benefit is highly questionable. As Private Eye and others were pointing out for years, this is the wrong scheme in the wrong places at the wrong time, the cost and benefit figures were fiddled a lot to make it seem more worthwhile, and the costs just kept rising sharply anyway… Read more »
Vote Up61-3Vote Down
saracen

I wonder how many Labour MPs refuse to accept the pay rise? And be careful about knocking the Boris bus slogan, according to the OBR we will save approx £10bn per year by not being in the EU.

Vote Up10-75Vote Down
Steve Goodman
The OBR also declared that our long-run growth rate has now sunk to 1.7%, and the OBR are not the only number crunchers watching and wondering what might happen: also, anyone paying attention has a lot to be concerned about – like the possible loss of up to 2.92% of our GDP from leaving the EU customs union and single market… (All as reported in today’s Observer,… Read more »
Vote Up58-2Vote Down
alaniow

Vote Up92-14Vote Down
railwayphil
There are two sides to every ‘fact’ put out there! HS2 is expensive, yes and that is a fact. BUT, it is for a 120 year lifespan project which has had all-party support, started by Labour, supported by the coalition and endorsed by the Tories. I 100% agree with the other money wasting points made by the way. But HS2 is rejuvenating many areas over a 150… Read more »
Vote Up11-62Vote Down
saracen

I agree, while the rest of the world is roaring ahead with faster trains our Victorian rail infrastructure has reached its full capacity. What’s the solution… more cars on the road, flying (it’s quicker by rail!), rocket powered horse and carts?

Vote Up9-61Vote Down
Rowan
Our superb railway infrastructure has not reached its full capacity. It was deliberately attacked in the 50s and 60s by a corrupt Tory minister, Ernest Marples, a man who’d made his money from road haulage, and he got Dr Beeching to be his stooge. Then the railways were attacked again in the 80s by another Tory government who privatised them. The overtaking lines at stations were ripped… Read more »
Vote Up560Vote Down
Rowan
I’m glad yiu agree that the other vanity projects are indeed wastes of money. But HS2 is alo a vanity project, and indeed a scam. HS2 does not have all-party support. The Green Party oppose it, even though they support HS1 (the link from London to Eurostar) and support railways in general. HS2 is not ‘rejuvenating’ anything – it is destroying landscapes and wildlife habitats and people’s… Read more »
Vote Up550Vote Down
Steve Goodman

Some related number crunching from the latest Private Eye (1544, p.10):

*(from the same source) A reminder that taxpayers are already paying more than £1,000 per day per consultant for the poor performance on Test and Trace and so on.

Vote Up14-1Vote Down
hialtitude
It is well to rememeber that Dominic Cummings received a 50% pay increase while employed as a special adviser to Johnson. This is the same Dominic Cummings that broke Covid quarantine rules for personal reasons. I find it is beyond belief that Johnson who contracted the virus while arrogantly ignoring transmission guidelines during hospital visits to meet Covid patients would subsequently reward NHS staff with what is… Read more »
Vote Up95-15Vote Down
VentnorLad
“After adjusting for inflation, the real-terms salary for someone at the top of band 5 actually fell by 9% between 2010/11 and 2019/20” https://fullfact.org/online/september-2020-nhs-pay/ Nurses are significantly worse off now than they were a decade ago. No one becomes a nurse in the hope of riches. But they do expect a fair wage for the work they do. The government are dangerously out of touch with nurses… Read more »
Vote Up84-6Vote Down
andy

It’s all part of the Tories plan to demoralise Staff and kill off the NHS, so the only alternative is to then welcome in the private health sector.

We voted for them, so enjoy the end game folks!

I have a horrible feeling you may be right. Let’s hope that enough people see through them and their plans to turn everything into an opportunity to hand over even more of our money to the richest people.

It is interesting/revealing that Bob Seely’s recent newsletter praising the budget failed to mention the Nurses pay rise in his brag list.

Vote Up73-11Vote Down
movinon
A 1% pay rise for nurses – shocking, disgraceful etc. But hang on a minute. This is the Tory party that spent ten years driving the NHS to its knees, starving it of investment. This is the party that ignored the outcome of the 2016 pandemic exercise, Operation Cygnus, which correctly predicted a disastrous outcome if no action was taken. The Tories took no action. This is… Read more »
Vote Up64-5Vote Down
longford

As you wait another few months for your elective surgery, consider which box you tick next time.

Vote Up53-2Vote Down
peter1
Track and Trace has reportedly cost £37 billion. Where’s the breakdown for this collosal cost? It’s more than the Defence Budget! More than Govt. Dept. Budget. Where has it all gone? It’s a major scandal that all Ministers come on and can give no answer. Meanwhile NHS nurses are offered 1% People who at least should be paid Danger Money. Scotland has a conscience and is paying… Read more »
Vote Up200Vote Down
broc
In view of the fact that Doctors, nurses and all nhs staff are heroes for the sacrifices and hard work they have given throughout the pandemic and therefore are deserving every appreciation. While I appreciate feelings in this regard is my understanding that it is to show appreciation that an extra 1% added to their recent 10% pay rise at a time when millions of pounds are… Read more »
Vote Up17-75Vote Down
Rowan
Of course you’re right that NHS staff are not the only people who have suffered. But the government are being utterly hypocritical about this. They could stop all the pointless vanity projects that are costing billions (HS2, yet more roadbuilidng, Trident, to name just a few). They could stop handing over public money to their useless mates who have no experience to do the job they’re supposed… Read more »
Vote Up56-2Vote Down
saracen

Are nurses poorly paid despite having a recent 12% payrise? According to Labour they also work overtime for nothing, that contravenes NHS pay policy. Who is correct?

Vote Up20-80Vote Down
Rowan
Of course loads of NHS staff have done extra work for no extra pay in the last year – there’s been a pandemic, and they’ve been doing extra to try to save people’s lives. And that’s because they care – that’s why they do their job. But they deserve to be treated with some respect. The government have been blatantly clapping them for photo opportunities, but now… Read more »
Vote Up59-2Vote Down
VentnorLad

Our lacklustre MP also cites this 12% figure on his website:
https://www.bobseely.org.uk/campaigns/nhs-pay

Unfortunately for him, it’s simply not true. It’s not an outright lie, but it’s hardly the whole truth:
https://www.channel4.com/news/factcheck/factcheck-have-nurses-already-had-a-pay-rise

Most of the country have sacrificed lives, dreams, education and jobs to ‘save the NHS’ while many services were withheld. They should be bl**dy grateful 1% is even on the table given so many are now jobless or been on a paycut payout throughout this.

Vote Up14-80Vote Down
Rowan
If you had ever had to rely on NHS staff to save your life or the life of anybody you loved you would not say such things. Nobody who has ever been helped by the NHS, or whose loved ones have been helped, would be so complacent. Of course many of us have made sacrifices. But the people who have suffered most in this last horrible year… Read more »
Vote Up63-3Vote Down