Letter: ‘Only alternative to mendacious prime minister and what remains of his party is Labour’, says IW Secretary

The Isle of Wight Labour Party Secretary says all shades of opinion need to be represented at the polling station, indicating they would not step down if an election was called. 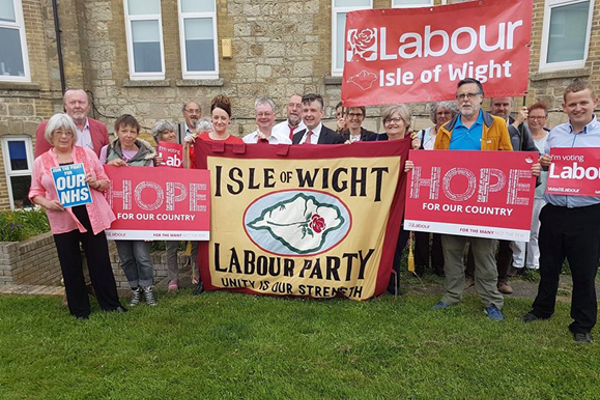 In response to the Letter from Vix Lowthion in relation to snap election alliances, this from Robert Jones Secretary/Agent, Isle of Wight Labour Party. Ed

May I remind Vix Lowthion that the Green Party made the self-same argument in 2017 – for her opponents to stand down to give her a clear run, all in the name of “unity” and common cause – on the grounds that her party had polled 400 more votes than Labour in 2015.

If she were at least morally and intellectually consistent, she would surely grasp that in 2017, we won over 4,000 votes more than the Green Party – the logic of her position then surely demands that she should be the one to stand down, if anyone does.

There is nothing “petty” about the choices to be made between competing arguments – the pettiness is Vix’s, in assuming we should all graciously make way for her as the sole challenger to Bob Seely: knowing, as we all do, that she would fail.

The Green Party out-spent Labour 2-1 in 2017, and still fell behind us. Caroline Lucas appeared at times to be camping on our virtual doorstep, telling everyone that the Green Party could win – even though the most reliable polling organizations quite plainly told her otherwise.

The Green Party has one MP out of around 600 – hardly even a Parliamentary footnote.

Not just Nero fiddling while Rome burns
I agree with Vix Lowthion about one thing, at least: oddly, the one thing she doesn’t really address in her letter.

The Brexit argument has got in the way of any effective decision-making on environmental concerns: this time it’s not just Nero fiddling while Rome burns, but the governments of the world fiddling while the earth itself burns.

Only Labour can effect the change
But the Island’s electors are not going to be able to do the first thing about that, or even to bring such issues forward for the consideration and action they need, other than through changing the present government and electing Labour in its place.

The Tories won’t do it; the Green Party can’t do it: only Labour can effect the change that Vix Lowthion and I both want to see; it’s sad that this is a logic she cannot or will not accept.

Filed under: Election, Island-wide, Letter to the Editor, Politics

9 Comments on "Letter: ‘Only alternative to mendacious prime minister and what remains of his party is Labour’, says IW Secretary"

I really do not care who islanders vote for in the next General Election.

All that I would plead is please do not vote Conservative.

Vote Up23-11Vote Down
Steve Goodman
Three days ago journalist Jeremy Paxman popped up again on TV’s Channel 5 looking at ‘why our politicians are so cr*p’; part of that program covered the problem of ‘safe’ seats like the Island, part covered the problem of ‘first past the post’ elections like ours, part covered people apparently not caring, and part covered people who care enough to plead for something better than the cr*p… Read more »
Vote Up7-7Vote Down
nickstuart

I’m afraid the Labour party is part of the problem. Unwilling to listen or tolerate internal criticism and certainly unwilling to make common cause with anybody else on major issue. Perhaps one of the reasons why at my recent selection meeting we welcomed former Labour and Conservative members.

I certainly respect the ambition of the Greens, but to snuff out competition on the left makes me feel as though there is an undemocratic whiff in their plan. As a side note there is no libertarian alternative which makes me sad.

Vote Up9-7Vote Down
Geoff Brodie
Spot on Mr Jones. Though selecting the right candidate for next time is crucial. 30 months ago your last candidate was an unknown, new to the island. Now people have begun to ‘sus’ him out for what he really is. With him your vote will deteriorate. Additionally your local pro-Remain position on the EU will cost you big time. Labour will not do well in my area,… Read more »
Vote Up18-18Vote Down
colinteller

Johnson giving a (rubbish) party political broadcast in front of police recruits – one for the electoral commission?

Vote Up7-9Vote Down
gary
I agree with Robert Jones wholeheartedly, I don’t remember electing ranting Vix as queen of the island? She is certainly the local media’s darling, maybe because of her litigious nature, but I think most islanders she her as the self-serving hypocritical charlatan that she is. Perhaps it is the lovely Vix herself that is the problem, how many elections has she now stood in and lost …… Read more »
Vote Up5-8Vote Down
Tim

The best hope for the island’s future is for all political parties to stand aside in favour of independent candidates who were born & bred here. Otherwise we just seem to be a stepping stone for some rosette wearing dummy on an ego trip.

Vote Up8-13Vote Down
Steve Goodman
I’m old enough to have been given a good basic state education, so I know that until recently alternative meant one or the other (of two), and old enough to have been disappointed for decades by the swing of the British political power pendulum between only the main two parties – which has contributed so much to our present predicament, which has therefore never been fit for… Read more »
Vote Up10-16Vote Down