Part two of life as a Island cabbie.

Following on from Anthony’s first post, he continues with his account about life as an Island taxi driver. Ed 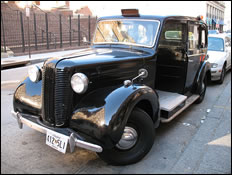 Carrying on the discussion about tariffs, whilst the vast majority of customers are well behaved, alcohol can cause many problems late at night. Although I can’t be certain, a carrot in the form of higher taxi tariffs to encourage taxi drivers to work late, could’ve been the reason for the strange tariffs we have now kicking in at 10.30pm and midnight.

A throwback to the bygone days perhaps?

Don’t forget the costs to the drivers
Driving a taxi in 2009 may sound like a good way of making a living but bear in mind the costs for people like myself. Imagine having to shell out £20,000 – £25,000 for a wheelchair accessible vehicle. That’s a lot of money from your net income.

We’re all aware of how bad the Island roads are, many of us have to over inflate our tyres just to cushion ourselves from the potholes.

Others have to constantly replace anti rolls bars, wishbones, lower arms as well as tyres and general wear and tear. Most people wouldn’t be surprised to hear that insurance of £1200 a year is not unusual and let’s not forget that fuel forms a massive part of a cabbie’s annual expenses.

The list goes on
But it doesn’t stop there. We also have to undergo an annual compliance check and an MOT, as well as spot checks by the council.

CRB (Criminal Record) checks are done every 3 years and medicals are carried out before being granted a license, then every 5 years from 46 years of age. Not only that, but you also have to pass a knowledge test prior to getting a license.

One fare rise in just 12 years
Since April 1997 we have had just one tariff increase in April 2004, so basically just one fare increase in 12 years.

Imagine working for somebody and being told that you will get a pay rise this year but you might get just one more in the next 13 years?

Garage repair bills don’t stay the same each year, costs of vehicles don’t come down, nor do day-to-day living expenses.

A plumber or hairdresser may be able to charge more for the same job year on year, a taxi driver relies on the whim of the council.

Looking to the future
My understanding from 2012, is that all hackney carriage vehicles must be silver and when replacing vehicles, something under the age of 3 years old will be expected.

Check back later for the third part of Anthony’s insight of life as an Island cabbie when he’ll be explaining the rates and more. Ed