An unwanted teddy bear for sale in a charity shop has been used to help bridge the between young and old in this inter-generational creative writing project. 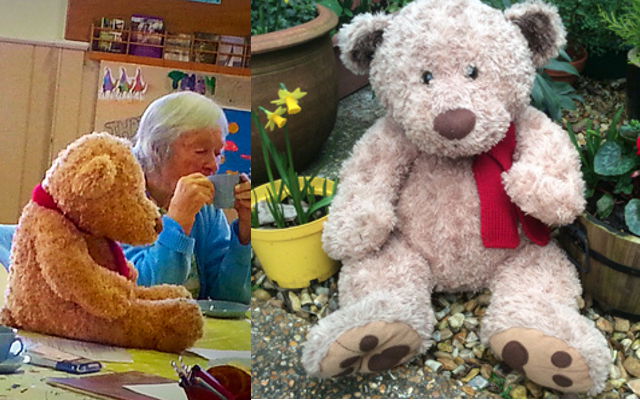 Local charity Independent Arts have a new recruit in the form of a large cuddly bear called Henry!

Inter-generation project
As part of Independent Arts awareness raising drive the children at Dover Park School have also been learning about the impact of Dementia, and memory loss.

“We are so pleased that the pupils and staff at Dover Park School have taken part in this inter-generation project.

“It’s been so good to break down some common assumptions, and the children have been so open to the creative journey that both the residents and Henry have taken. He’s worked hard in all his lessons at the school, and will even be taking a jaunt with the children on the Isle of Wight Steam railway!”

“I first met Henry Bear in a charity shop, forlorn on the top shelf, a fading ‘REDUCED’ tag pinned on his red tie. He looked like a bear in need of a friend. So I bought him. I had studied Creative Arts for People with Dementia at Stirling University and wondered could Henry help other people living in care homes create new stories?

“I knew already from the US-based ‘Timeslips’ programme, new and creative stories could be written by people living with dementia; could we do this using Henry Bear? For me, it has been such a joy to watch people living with dementia contribute through words, actions, looks or song. The stories they create are wonderful, often exotic, always imaginative, fun, sometimes sad and often with unexpected twists!

“Creative writing is an intensely interdependent act. As Henry would say, it’s like baking a cake; take a handful of the known, stir in some current happenings, sprinkle liberally with imagination, mix well and bake carefully.”

Find out more
For further information about the project please call Independent Arts (01983 822437). To catch up with Henry’s other work in care homes please visit our Website

“Unwanted teddy bear” may be the saddest 3 words in the English language.

I am going to have to lie down now.