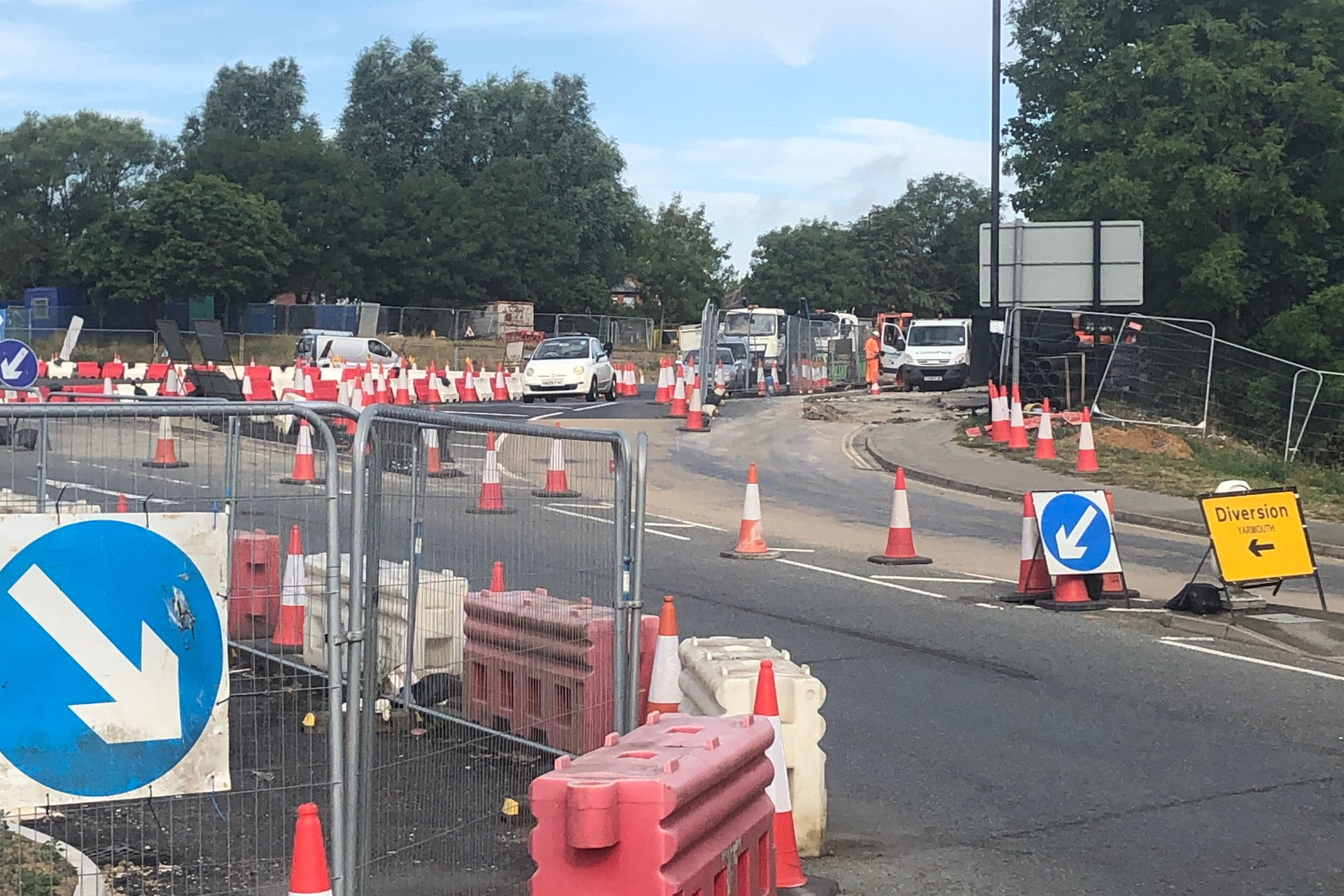 As reported by News OnTheWight last week, the ward councillor for Parkhurst says a number of ‘small’ problems are being overlooked in the multi-million-pound update of the St Mary’s roundabout in Newport.

The roundabout-turned-junction is set to be finished by the end of the year, according to the Isle of Wight Council, but residents in the area say they are noticing the small issues, seemingly overlooked by the project’s designers.

Challenging visibility
One, in particular, includes vehicles being unable to exit Hampshire Crescent, onto Forest Road, as vehicles are either stopped across the junction or the visibility for vehicles pulling out is challenging.

Ward representative for Parkhurst, Cllr Andrew Garratt, said residents have told him of the stresses and hazards this has caused, which he raised with Cllr Ian Ward, the cabinet member for infrastructure and transport, who did say signage would be put up to stop cars stopping over the junction. No signage has been put in place yet.

Garratt: Residents have had to put up with a lot
He said:

“I cannot imagine in an £6 million  project the cost of some paint and whatever legal licences need to put a keep clear area there would add much to the cost.

“It is that sort of thing which I am struggling to get the council to respond to — these are small things, in their view, which are big things to residents. The hundreds of people who live on the estate who have poor visibility coming out of the road.

“The residents have had to put up with a lot — the Forest Road closure and having to drive around the houses to get home. It does alarm me.”

Other issues
Other issues raised include a car driving through the red light at the new crossing on Forest Road and poles in the pavement on the side of the junction near to St Mary’s Hospital which leaves little room for a pedestrian and wheelchair user to pass, leaving questions being raised as to why another option wasn’t considered.

Cllr Garratt has put a number of issues, including the continued problems with congestion, to Cllr Ward, hoping to get the smaller problems noticed and rectified.

Only one complaint
Cllr Ward has previously said he had only received one complaint directly to him as a result of the changes to the roundabout, despite Island Roads directing complaints to him.

newest oldest most voted
garageelfiniow
A subway should have been construted under the road from St Marys to the otherside in the same manner as the one from Hunnyhill to the B & Q side. It would have done away with the need for a crossing and traffic lights and is one less hold up for the free flow of traffic. The whole thing is another cock up. Roudabouts allow free flow… Read more »
Vote Up82-7Vote Down
Colin
@garageelfiniow. I couldn’t agree more. You make a good point. As far as I can remember, a subway was never on the agenda. However it was stated by the council that the crossing lights would be tied in to the main system so that when trafic was at a standstill on the main carriageway to allow Forest road traffic to join, then the crossing lights would allow… Read more »
Vote Up45-2Vote Down
smiffy

A new phrase enters the Isle of Wight vocabulary—“a floating bridget”. A floating bridget occurs when something which isn’t a problem is fixed and causes a problem, usually at the hands of officialdom.

Vote Up530Vote Down
ThomasC
Whilst I’m no fan of the PFI, or this administration, the new road layout will have been modeled on traffic volumes and flows, using objective data, not how people feel about how likely it will be better. Actual professionals will have designed it, not Ian Ward. I’ve lived in Northwood and had to deal with the awful traffic into Newport through the old roundabout. I currently live… Read more »
Vote Up2-45Vote Down
mrsmith