Major change on the way for Ryde Pier – and beyond 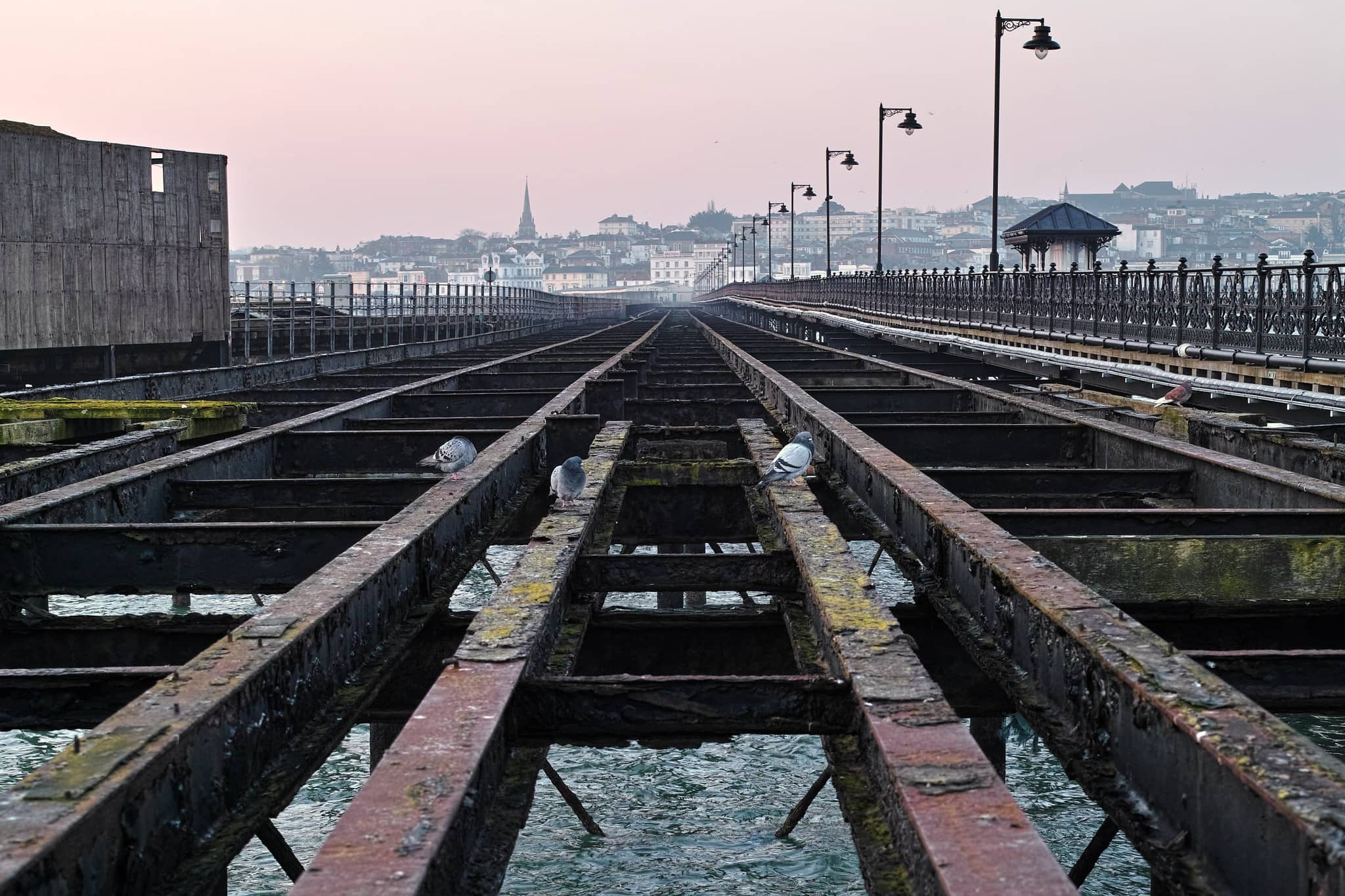 The redundant tramway on Ryde Pier looks set to be transformed into a dedicated cycle and pedestrian walkway as part of a multi-million pound package of active travel and public transport improvements announced by the Isle of Wight Council today (28th September).

It follows a successful bid to the government’s Transforming Cities Fund (TCF) which will see £10 million invested in Ryde.

The ambitious proposals include the long-awaited regeneration of the town’s transport interchange with vast improvements for pedestrians and cyclists not only at this key transport hub, but along the entire length of Ryde Esplanade to Appley.

“The scheme will provide a safe cycling and walking route along Ryde Pier, separate from vehicles, and create an improved transport hub at this gateway to the Island.

“The Coronavirus (Covid-19) pandemic has accelerated the changing travel patterns we were already beginning to see. With more people already cycling and walking, this is a critical time for us to make changes for the future.”

The bid was awarded £56 million towards the total scheme package of £96.5 million, with match funding provided by each of the bidding authorities and their partners.

The success of the bid is seen as an important next step for the three authorities towards developing a rapid transit network for the area.

What to expect
The Isle of Wight schemes include a fully accessible cycling and walking link along the historic Ryde Pier utilising the redundant tramway pier. The project would address the current conflict between pedestrians, cyclists and vehicles using the pier.

The plans for Ryde interchange include a total reconfiguration of the current layout with significant public realm improvements, refurbished public toilets and greatly enhanced facilities for pedestrians and cyclists including widened footways, new crossings and cycle routes.

People will be invited to have their say as part of a comprehensive consultation when detailed plans are published in the coming weeks.

“We fully endorse the concept of an improved public transport interchange at Ryde which builds on our investment on the Isle of Wight to services connecting to the Island.

“This programme is essential not only to improve modal interchange in terms of building the economy, but also promoting the Island to visitors getting around the Island by bus.”

“South Western Railway is delighted that Ryde Esplanade will receive additional funding to improve transport connectivity on the Island.

“We are thrilled the Island has been awarded this grant. The old tramway will be transformed into a pleasant route for walkers and cyclists along our historic pier towards Wightlink’s foot passenger terminal.

“FastCats are cycle-friendly and they will now be easy to access directly from the Esplanade, thanks to this welcome investment in active travel and public transport.”

The news follows successful bids to the government’s ‘Restoring Your Railway ‘Ideas Fund’ to restore railway lines lost to the Beeching cuts, and the £26 million announced by the transport secretary last September for refurbished rolling stock and a new passing loop on Island Line.

Sometimes, Colin, you should just take the win.

This project represents the kind of forward thinking we don’t see enough of on this Island. Well done everyone involved.

Vote Up34-2Vote Down
Benny C
Absolutely right. For once we have some properly joined up smart thinking. Well done. Now let’s see the procurement and delivery completed equally well. Ian Ward please think through your involvement as a representative of the folks on this island, you’re accountable for infrastructure and you’ve taken press credit for this scheme. Equally, you messed up the chain ferry replacement more than anyone could have thought possible,… Read more »
Vote Up29-1Vote Down
Colin

Just taking the win isn’t enough. There is still the regeneration plan in existence for the area which I seem to remember didn’t go down a storm when it was published. Sea front flats and shops if I remember correctly without checking. Sorry if I wasn’t enthusiastic enough, this is great news, but tempered with realism having seen various plans come and go.

Vote Up110Vote Down
Colin
The latest in a long line of promises to upgrade Ryde Transport interchange. It looks like this one may actually happen which is a good thing. One can only hope that the IW Council don’t ruin it by over-commercialising the pier and the adjoining seafront. I suppose the ice-rink will be demolished and I do hope that the previous council idea of more unwanted shops dosn’t happen.… Read more »
Vote Up33-4Vote Down
sillybilly
That’s fantastic news and why someone chooses to get all negative about it is beyond me. Good news ….but. to some people isn’t it? There’s enough stuff to get down about at the moment . Be happy for something that is going to be great and I hope even pave the way for things like Xmas stalls and the like on the pier as there used to… Read more »
Vote Up24-3Vote Down
wellsm

I’m well happy about the proposals. It’s the folk in charge of delivering that I find exasperating. Wasting money, opportunity and reputation time and again through utterly dreadful governance around the execution of simple plans.

This is great news. Just separating cycles & walkers form the cars on that narrow pier is a big step in the right direction.

Vote Up21-1Vote Down
jazzerpete
There was a recent planning application for Hovertravel to build new offices/storage on their site by the pier. Let’s hope this will now be integrated into this new seafront plan near to the interchange. Or will the building be a one-off and a blot on the shoreline? As for the Ice Rink, there must be worries about what will replace it if it is demolished. No high… Read more »
Vote Up11-1Vote Down
Phil Jordan
neither of those buildings were to be included in this grant funding project. The grant funding has been reduced ( from around £15m. to £10m for Ryde) so there are likely to be changed to the original project plans anyway. But the ice rink was not included in the project (and is still being marketed) and part of the funding was to go to Hover Travel but… Read more »
Vote Up70Vote Down
Rhos yr Alarch

Interesting information on charges for pier access. Would this include pedestrians and cyclists…?

Vote Up10Vote Down
Phil Jordan
my memory tells me no charges for cycles/pedestrians but I might have that wrong. It’s a Wightlink decision, of course but I sincerely hope not… I know cycle/pedestrian access will be enabled to a wider access than the existing past the vehicle barrier. In fact, there may be two separate accesses round the station for such access onto the pier – all from memory – and remembering… Read more »
Vote Up20Vote Down
Stuart George

Why is it a Wightlink decision? I understood the tramway section of the pier is owned by the IW Council.

my understanding is the pier is ‘owned’ by Wightlink …
Happy to be corrected.

Vote Up20Vote Down
Benny C
Exactly. Let’s try to avoid cheap clunky architecture in the way of a world class vista. Wightlink’s silly new building at a Gunwharf obscures a brilliant harbour view, it’s cheap and tacky inside , leaving workers and visitors feeling second rate, the cafe could be far better and a Really decent income stream if it was run properly. It’s all very average and it tells customers they’re… Read more »
Vote Up3-1Vote Down
Benny C
Storage. On the seafront. Great. No doubt a shed. Lovely. Exactly what Ryde needs plonked amongst its biggest natural asset. And folks Wonder why disrespectful behaviour occurs at night along the seafront. Because the place is treated with architectural disrespect and the message is getting through -‘We don’t think Ryde is worth more than this…’ (insert latest cheap ugly depressing building). )Integrate it with the station buildings… Read more »
Vote Up4-3Vote Down