Award winning bluesman, Marcus Bonfanti, heads to Quay Arts on 1st February. Well known for his high energy live shows, this should be a great night out. 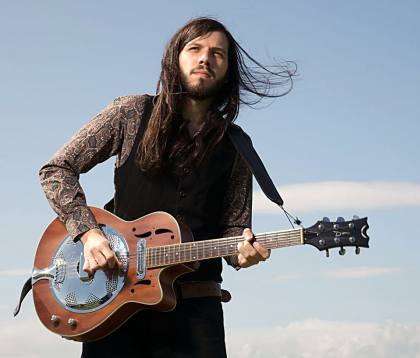 Thanks to Rachel from Quay Arts for reminding us about this upcoming gig. Ed

Award winning bluesman, Marcus Bonfanti, will be heading to the Isle of Wight on Friday 1st February, as part of his 24 date UK tour, to play at Quay Arts, Newport, performing songs from his newly released, third studio album.

Hailed as being at the forefront of the young British Blues Revival, Marcus Bonfanti is fast building a reputation as one of the most exciting acts on the UK live circuit, proving his credibility by winning Best songwriter of the year and runner up male vocalist & acoustic guitarist at The British Blues Awards 2012.

High energy live shows
Bonfanti is best known for his high energy live shows with his three piece band but he will be traveling the UK solo in February 2013 to promote this new album through a set of intimate solo gigs. These shows will contain both old and new material presented in a way his audience will never have seen him in before. Also featuring a stage set to transport the audience further into Bonfanti’s world, it will be a night to remember.

Support comes from popular Island musician Nick Cane who will kick the evening off with some fine acoustic blues, assisted by the superb Denzil McNeelance on saxophone.