There were some strong performances at the Poole Regatta, but the Men’s Senior Fours were the stars of the show. 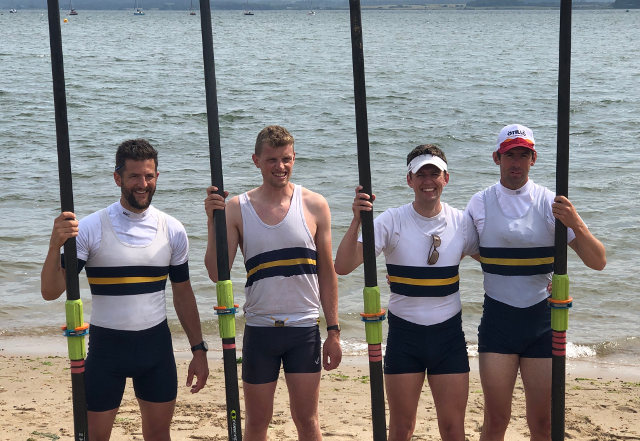 The highlight for the Club came in the Men’s Senior Fours event where the Club Senior Four of Ollie Bottrell, Matt Allsopp, Mike Ewing and Adam Miller (pictured) and coxed by Bryony Reeve, after a poor start but an excellent turn rowed through the favourites from BTC to take the win by half a length – a first win for their new boat.

Two third places
There was another strong performance from the girls’ J16 Quad, Poppy Starkey, Freya Drage, Niamh Edwards and Emily Davis with Cayman Adams coxing who finished in second place. This young crew went on the compete in the Ladies’ Novice Fours event – this time with Dan Sanderson Coxing where they finished in a very creditable third place.

Two sixth places
The Men’s Coastal Junior Four of Tye Cameron, Ben Sanderson, Tom Starkey and Austin Smith coxed by Dan Sanderson fought their way through to the final where they finished in sixth place.

Two Men’s Novice Fours competed – the “A” Crew of Paddy Kearney, Charlie Walford, Callum Hynd and Harry Jones coxed by Mick Jenner who finished in 4th place in the final and the “B” crew of Sebastian McKeown, Dan Sanderson, Gully Rhogan and Jonah Lewin coxed by Shanklin’s Daisy Faithfull finished in sixth place.

Junior Pairs
In the Coastal Junior Pairs race Joel Smith and Tye Cameron raced well in their heat to qualify for the final, where they finished well down the field.

The second Coastal Junior Pair of Tom Starkey and Ben Sanderson failed to make the final.

In the Men’s Novice Sculls final Austin Smith finished in third place, a result matched by his brother in the Men’s Coastal Junior Pairs and Dale Buckett in his first outing for the Club of the season finished fourth in the Men’s Senior Fours.