The Million Dollar Bash is a one-day festival on Saturday 31 August, at the County Showground, near Cowes, honouring the anniversary of Dylan’s legendary event. 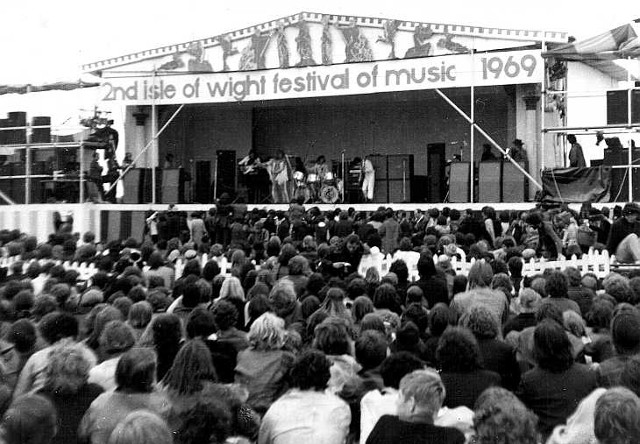 Bill shares this reminder about the upcoming All Wight Now event. Ed

Fifty years to the day since Bob Dylan graced the impressive stage at the 1969 Isle of Wight Festival of Music, the celebratory Million Dollar Bash’s artists will strut their stuff on a replica structure.

The Million Dollar Bash is a one-day festival on Saturday 31 August, at the County Showground, near Cowes, honouring the anniversary of Dylan’s legendary event.

“Bill made a trip to Pinewood Studios to rent props to adorn the ‘Grecian’ pediment stage.”

Paying tribute to that stage and music
Now the Island group behind the Bash, All Wight Now, is aiming to recreate Bill Foulk’s 1969 stage.

“The 1969 festival had a special stage with classical Greek influences and its influence carried over to the 1970 Isle of Wight Festival. We wanted to pay tribute to that stage – as well, of course, as all the great music on offer.”

Pride decoration manager
The job of recreating the look of the stage that provided the platform for Dylan and top 1969 acts such as the The Who, The Band, The Moody Blues, Family, Julie Felix and Free has been passed to Ellie Moore, the site decoration manager for Isle of Wight Pride 2018.

“We very much want to create something of a replica of the stage that was unveiled for the second Isle of Wight Festival of Music. It was Greek themed and Pathenon-esque. It will have those Palladian influences and adornments and similar colour themes of white, blue and yellow.

“And just like the 1969 festival, we will be leaving it up until the eleventh hour to finish the thing! I hope the audience at the Bash approves and if there are any old hippies who saw the original, back in the day, I am sure they will recognise the inspiration behind the 2019 version.”

On the bill
The Million Dollar Bash stage will certainly look familiar to several performers who are returning having featured alongside Dylan on the 1969 bill.

Coming back are Julie Felix, Jacqui McShee’s Pentangle, plus Dick Taylor and Phil May from The Pretty Things and Andy Roberts, who played with The Liverpool Scene.

At the top of the Bash bill is special guest Richard Thompson and Dylancentric, put together especially for the event by Thompson’s former Fairport Convention bandmate Ashley Hutchings, plus rockers Wishbone Ash, celebrating their own 50th anniversary this year.

Book now
Tickets are available online via the Website (£44 for adults – under 18s half price) or discounted hard-copy tickets (£40) are available for Islanders from Dimbola Galleries and Museum, Freshwater, or from That 60’s Place, Cowes High Street.

1969 Greek influenced? why not stage a military coup from a junta of right-wing colonels ?
After all, we are now entering a political “twilight zone” from Halloween…