Mini-series: Read letters sent home by 21-year-old Fusilier whilst based on Isle of Wight during WWII: Part Four

This is the final part of our mini-series featuring letters from a 21-year-old Fusilier sent home to his family whilst stationed on the Isle of Wight. 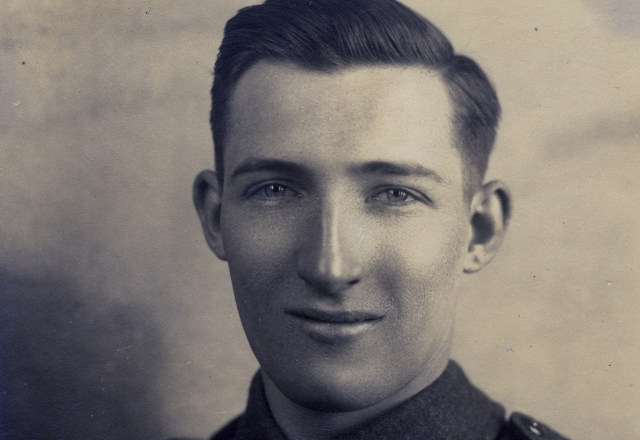 We’ve reached the final part of our mini-series of letters written by a 21-year-old Fusilier Douglas William John Harmer, known as Billy, from when he was posted to the Isle of Wight during WWII.

We’ve followed Billy’s journey as he writes to his family describing his time posted to the Isle of Wight during the Second World War. His letters give a great unfiltered insight into the life, thoughts, concerns and day-to-day duties of an everyman as he is moved around the Island to protect it.

Transcribed by uncle
Billy’s letters have been shared with us and transcribed by his nephew, Ray Gaines, who says,

“In transcribing the letters I have kept the prose and grammatical errors in, to maintain the authenticity. As can be imagined Billy wrote his letters hurriedly and in not particularly favourable conditions.”

Hope you are all well and safe at home, thank you for your letter. I think the photo is the best one I have ever seen of you, it’s the goods. I bet your bloke likes it.

I am glad you keep in the air raid shelter when the planes come over, and keep the old man in when there’s any AA shelling, as it is pretty dangerous, even us blokes with tin hats keep under cover when they start shelling them, and they come backwards and forwards over the top of us every night.

Wednesday my mate and I went into Ventnor to the pictures, and we saw the hotel which the bomb had dropped on, it had blown about a quarter of it away, but there was still a glass electric lamp shade hanging from a bit of ceiling into space and it had not been broken.

We have moved again and we are at a holiday camp, a fairly big one this time. There is no furniture in the huts of course but they have a good bar, were you can get beer and all kinds of drink, also a radiogram, a small billiard table and table tennis and slot machine.

I have just heard a squeak from a bloke who has seen the leave list and he says I am going in about a weeks time, not this Monday but the next. I think it’s pretty reliable, anyhow if it’s true I shall be informed about 4 days beforehand, the I can write and tell you for sure, perhaps then you will be able to fix your week up.

Well I think that is about all I can think of for now. I wish you would all write more as I waited a week for your letter and was beginning to get worried.  So cheerio, love to Mum and Dad.

Hope you are all well at home. I received your parcel of books and found them ok.

I don’t think my leave should be very long now as there are about six more BEF chaps in our platoon to go. Have you had any air raids or bombing yet?

I have read about the bombing of Croyden Airport. There seems to be quite a lot of planes brought down on the island. Friday, while we were having a rifle inspection a phone message came through that a plane had crashed in our area, so a L/C, seven other chaps and I were sent out in a truck to find it, but when we got there number 9 platoon had beat us to it.

It was one of our planes and had crashed into the side of the hill, and was burning. The pilot had jumped out in his parachute and was picked up later unhurt.

Don’t forget if anything happens keep off the streets and get in a air raid shelter. Well dear Mum I must close now.

Love to all, your loving son Bill.

Hope you are all well at home and you have had more sleep this week. Thank you very much for the 5s it always comes in handy. Monday, a party of us went to Newport, my mate and I went to the pictures and saw the ‘Broadway Melody of 1940’, it was very good.

Last night we had a picture show in the camp, in the big hall which was used for a dining hall and concert hall. There was (sic) two films, a travel film in colour and a racing film ‘King of the Turf’. It was given by the Naffi mobile cinema, it was 3d to go in.

Every afternoon we have a swimming parade but I can’t swim yet, although its nice to go in the water after the short drill parade we have, as we get pretty warm out in the sun. We have heard bombs dropping on the Island several times this week.

Last night we could hear navy guns off the French coast. One chap has gone on leave from our platoon today and I think I am after him on the list. I have heard I might go Monday or the Friday after. The chaps who have gone on leave usually get into Waterloo about 3 o/clock but if I am told in time I will let you know.

Love to all, your loving son Bill.

Very sadly, Billy never did get his leave.

Just a few days later his parents received the dreadful telegram informing them that their dear son Billy was killed by a German bomb on the 6th September 1940.

He remains on the Isle of Wight in Parkhurst war cemetery, next to his pal Arthur Bevan who died with him.

Our thoughts are with Billy’s family at this particularly poignant time of year and thank them once again for sharing these treasured letters.

2 Comments on "Mini-series: Read letters sent home by 21-year-old Fusilier whilst based on Isle of Wight during WWII: Part Four"

Very interesting, thanks for posting.

Vote Up40Vote Down
joanna
I was was so moved by the letters of your uncle that you transcribed. I know the time and effort that it takes having done some of my parents’ letters from WWII. They both, however, lived on to live wonderful lives. But dear Billy was taken in his youth and innocence before his life really started. I am shaken again at the reality of the sacrifices so… Read more »
Vote Up20Vote Down