Mini-series: Read letters sent home by 21-year-old Fusilier whilst based on Isle of Wight during WWII: Part One

These letters written by a 21-year-old Fusilier based on the Isle of Wight during WWII are particularly poignant at this time of year. 2019 is the 79th anniversary of his death by an enemy bomb just days before he was due to go on leave. 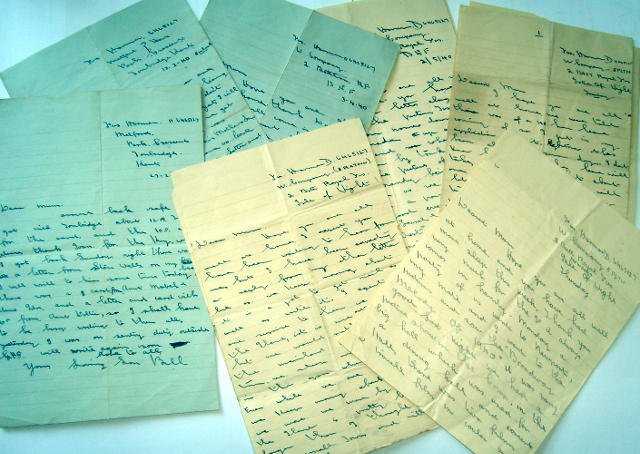 A series of letters shared with OnTheWight give you an insight into the thoughts of a 21-year-old who was posted to protect the Isle of Wight in the months leading up to his premature death by an enemy bomb.

Fusilier Douglas William John Harmer, known as Billy, was posted to the Isle of Wight in 1940. Billy’s nephew, Ray Gaines, recently got in touch with OnTheWight to find out whether we’d be interested in seeing letters that Billy had written home during his time stationed on the Isle of Wight during WWII.

Knowing Islanders’ strong interest in history we instantly said yes, we were sure readers would be fascinated to learn more about the lives of young servicemen stationed on the Island.

Letters from the heart
Ray says that when his mother (Billy’s sister) passed away, he found the letters his uncle had written which chronicled his time from joining up, through training, and out to France with the British Expeditionary Force (BEF), followed by the army’s hurried return to Britain.

Ray has shared a brief history below about his uncle to give some background and context. Over the next couple of days, we’ll be sharing Billy’s letters with readers. Very kindly, Ray has also typed them up to make them easier to read.

“In transcribing the letters I have kept the prose and grammatical errors in, to maintain the authenticity. As can be imagined Billy wrote his letters hurriedly and in not particularly favourable conditions.”

“Although the letters comprise mainly general family talk, there is an understanding of his feelings, his moments of loneliness and the comradeship between his fellow soldiers.

“The impression one gets from reading the letters is that despite being away from home there was, initially, a sense of excitement, even adventure and discovery of the man within the boy.”

We are immensely grateful to Ray for sharing Billy’s letters and photos with OnTheWight readers. Yesterday (Friday 6th September) would have been the 79th anniversary of Fusilier Harmer’s death, so our thoughts are with his family at this poignant time of year.

Setting the scene
Billy was born in Heston, Middlesex, England on February 27th 1919 to William Harmer from Gloucester and Lydia.

Billy was an ordinary lad growing up along side his sister, Joan, with all the usual hopes and expectations for the future.

His interests were photography and cine film, taking pictures of friends and family, including a few ‘buffoonery’ action shots.

During his teens Billy worked for a local engineering company as a store man.

In 1939 war clouds rumbled over Europe and at age 20 Billy was called up to serve his country.

Preparing for battle
After conscription, Billy was sent to Colchester for training and preparation for battle. Then during March 1940 Billy’s company of Royal Fusiliers was dispatched to France as part of the BEF.

The BEF was deployed mainly along the Belgian – France border. Hostilities for this group commenced with the invasion of France on May 10th 1940. The over whelming German forces drove them back through Belgium and North West France, forcing their eventual evacuation from several French ports, most notably from Dunkirk, although it is uncertain which port Billy went from.

Time on the Isle of Wight
Once back in Britain, around mid-May 1940 Billy was sent to Dorset and then onto the Isle of Wight. By now the war had taken a hold, the spirit of adventure was declining and a far more serious note, with the reality and uncertainties of war evident.

The Isle of Wight, along with its historical mainland neighbour, Portsmouth, was heavily bombed due to the extensive naval activities; also, because of its proximity to France the Island had a number of observations platforms and transmitters, plus aircraft assembly facilities.

It appears that Billy’s main role on the Island was to man road check-points, guard installations, and occasionally attend to downed aircraft.

Billy was due for leave, but was killed by an enemy bomb on 6th September 1940, just seven months after his 21st birthday.

Hope you are all well at home. I expect you have been waiting to hear from me, but I have been expecting a reply from my other letter, but as we keep moving about it is a job to get mail as well as write it. I expect you are surprised to hear we are on the island, it is nice out here but we would rather be on the mainland near a big town.

We sleep under canvas or in the open when it suits us. Even while we are on the isle we keep moving about. The island is pretty big, much larger than I thought it was with small towns and villages and good pubs. Last night our section was on a road block on the coast road only a few yards from the sea.

We parked up at 4.30 in the morning and came back to our tents a few miles down the road, had breakfast, washed and shaved by about 9 o/clock and then we all went to sleep by about 3 o/clock in the afternoon. Then we had dinner, after we had washed we went down to the village about 4 o/clock and had tea in the garden of a pub. We are going out on patrol around the coast tonight.

Well mum that’s about all I can write for now, so cheerio for the time being.

Love to all, your loving son Bill

Hope you are all well at home. I was pleased to receive the books and your letter. I expect you were surprised to hear we were on the Island. I don’t suppose there will be any chance of getting leave yet.

Since I have been on the island we have moved several times, although, I think we will stay in the position we are in now for a bit. At the present moment we are on the top of the cliffs at Alum Bay, close to the Needles.

I don’t know whether you know the island at all, but perhaps Aunt Min knows where it is. The place where we are is an old gun emplacement.

There are several old concrete gun positions and big brick magazines with roofs about 12 foot thick. I think it must be hundreds of years old because the breech part of the old cannon are still there. There is a searchlight battery here and they have a couple of army huts built among the ruins, one of which we use for sleeping. The searchlight is only a few yards down the cliff and their generator is in one of the old buildings.

Last night when I was on sentry go I saw the searchlights on the mainland pick up a raider and the A.A. guns open fire. Then the two lights near us opened up and we could see the plane quite clearly.

We take up our positions at night about 8 o/clock to 4.30 in the morning. We each get about 2 hours sleep, then we have breakfast about 6.30 and go to bed ‘til about 1 o/clock. This afternoon we all went down to swim or bathe. There is only one section of us here, 11 chaps.

I tried bathing but I am going to try to learn to swim. The grub’s not too bad but I buy lots of chocolate and stuff, as we get hungry being out at night and it’s pretty cold on the cliffs, although it’s nice in the day.

Well dear mum that’s about all I can write for now, so cheerio, love to all.

Look out tomorrow for the next set of letters written by Billy Harmer to his family whilst stationed on the Isle of Wight during WWII in 1940.