Natalie Bennett, leader of the Green party, coming to the Isle of Wight

Natalie Bennett will be appearing at a meeting in Newport on 9th September. Islanders are being encouraged to pop along if they want to hear more about Green Party policies. 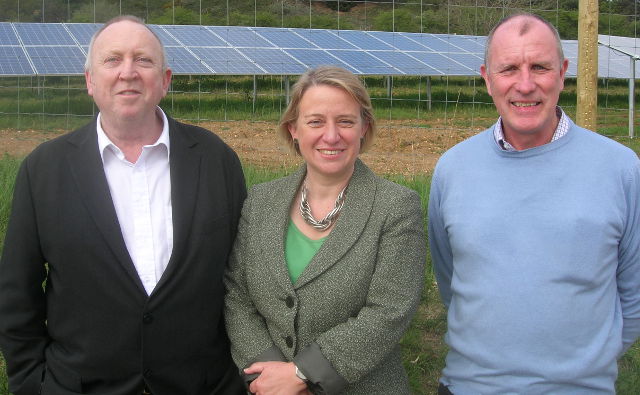 Thanks to Vix from the Isle of Wight Green Party for sharing details of this upcoming event with OnTheWight readers. Ed

The leader of the national Green Party of England and Wales, Natalie Bennett, will appear at an event at Newport Football Club on the evening of Wednesday 9th September, beginning at 7:30pm.

Parliamentary candidate Vix Lowthion, who will also be speaking at the event, obtained one of this year’s highest results for the Green Party in the whole of the UK – beating Labour, Liberal Democrat and independent candidates. In both the 2009 and 2014 European elections more Islanders voted Green than Labour or Liberal Democrat.

“Island residents are faced with many questions about the future of our children’s education, our parent’s care, employment for ourselves and our children, housing, the cost of transport, and keeping our unique way of Island life.

“The Island is a beautiful, green environment with great potential, and Green Party policies have much to offer.”

Heading to Bestival
On Thursday 10th September, Natalie Bennett will be addressing the crowds at Bestival, taking place at Robin Hill, Newport.

Earlier in the day she will be visiting businesses and community leaders in East Cowes and Cowes – details TBC.

Photo: Green Party leader Natalie Bennett and Green Party MEP Keith Taylor with Bob Keats from the Isle of Wight Green Party, at a solar farm near Arreton in May 2014

12 Comments on "Natalie Bennett, leader of the Green party, coming to the Isle of Wight"

Vix was still only third (a position Labour had held since 1970 until now) and so long as the parties of the ‘left’ fight each other, it will always be so.

Vote Up00Vote Down
Steve Goodman
Yes, co-operation is preferable and more productive than competition; voting reform to replace the discredited ‘first past the post’ system with AV would also be more representative, and therefore likely to increase participation in the political process and help to re-balance for a healthier society. For too long our only choice has been to eventually vote out people who have let us down; it’s not surprising to… Read more »
Vote Up00Vote Down
tiki

……….I hope she sings better than she interviews!

I’d like to meet her, just to check that she’s now got her numbers sorted when it comes to providing the funding for new homes for those in need.

However well intentioned Ms Bennett’s visit may be it represents an unnecessary journey using up the world’s precious resources. I thought that the Green Party was opposed to this sort of thing!

Have Bestival organisers invited any other party leaders to address the hordes, or is it just her?

I was thinking of buying a Bestival ticket, but I wont if it supports fringe political parties.

People from all parties are invited, yes.

whats the ‘carbo footprint’ of bestival? all the festival visitors coming byu car/boat/train plus all electricity needed for the acts will generat lots of carbon emissions. doesnt seem teribly “green” to me.

green party wants to tax private schools. that would push up rob da banks school fees. greens probably wouldnt approve of his 4×4 either

A really great evening. Many many islanders came to hear a national party leader on the island – only a year after she was last here. Q&A session was busy and insightful. Queues to chat with Natalie at the end. And a busy day tomorrow too.

I hope you all walked to this event and didn’t further pollute our planet with your 4×4 chelsea tractors and camper vans.

When you see her next time, could you ask her why she’s not welcome back to her home country of Australia.