National Trust and Men in Sheds raise £300 for Bembridge Windmill

Bembridge Men in Sheds say they saw an opportunity for both groups to help each other. You can still donate to the £50,000 fundraiser. 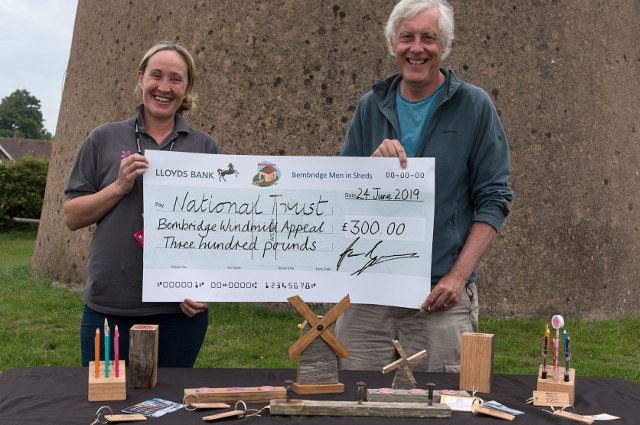 Two charities have worked together to raise £300 towards restoring the sails of Bembridge Windmill.

Bembridge Men in Sheds and the Isle of Wight National Trust attended Bembridge Street Fair last month where they displayed and took orders for unique items made from the original sails.

All profits were split equally between the two groups and this week representatives from Bembridge Men in Sheds presented a cheque for £300 to the Trust.

An opportunity to help each other
David Chubb of Men in Sheds said,

“We saw an opportunity to help each other. The National Trust supplied us with the removed wood from the windmill and Bembridge Men in Sheds turned it into a series of objects such as candle holders and coat hooks.”

£50,000 target
The conservation charity needs to raise £50,000 after the lattice work that forms part of the sails, known as sweeps, had to be removed last winter after time and weather took their toll.

Once painted by Turner, Bembridge is the last surviving windmill on the Island and one of its most iconic buildings.

Hinchliffe: Unique chance for people to own piece of Island history
Membership and Visitor Welcome Manager for the windmill, Sandra Hinchliffe, said,

“We are thrilled to have received this donation towards replacing our sails.

“The items are a unique chance for people to own a piece of Island history and to support two charities.”

Order online
For those who were unable to attend the Street Fair but would like to own a piece of Bembridge history, orders can still be taken at the windmill, where there is also a display of items available.

Donations towards the fundraising can also be made online at the Website.