A packed room listened intently as Dr. Rebecca Johnson explained her work with the United Nations, stressing the importance of involving every country in the legal banning of the use of nuclear weapons. Details of upcoming vigil included within. 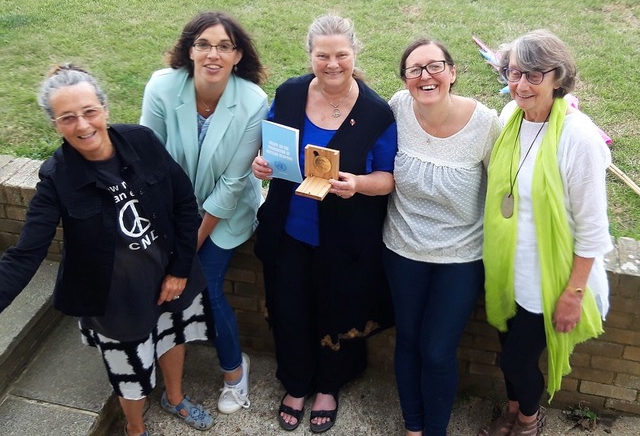 On Friday 26th July three speakers came to Ventnor as part of the Fringe Festival.

Global dangers
The event was titled Global Dangers, covering the dangers facing us all: the continuing world wide destruction of our planet; climate change and the threat posed by nuclear weapons.

Forty nine people listened intently as Rebecca explained her work with the United Nations stressing the importance of involving every country in the legal banning of the use of nuclear weapons. Stressing that the ensuing nuclear winter would be felt first and most by those countries that do not have nuclear weapons.

Fossil fuels and plastics
Vix described the dangers to the Island from the continued use of fossil fuels and the destruction of life by the dumping of plastics in the seas and oceans and stressed the Green Party’s commitment to reducing these abuses to the planet and consequent threat to humanity.

Julie spoke of her own experience and journey, and the need for every one of us to do whatever we can, to protect our environment for future generations.

Extinction Rebellion (XR)
Extinction Rebellion is rapidly growing throughout the world to tackle this multi-faceted issue. XR support the upcoming Global school strike, in which Greta Thunberg has asked not just school children but adults too to show solidarity.

This was the theme of this event – we are all on the same side – and we all need to be talking together and acting together to; Save the planet and with it humanity.

Peace vigil
On Saturday 10th August at 11am Isle of Wight CND will hold a vigil to remember the victims of the atomic bombs dropped on Hiroshima on 6th August and Nagasaki on 9th August 1945.

Everyone is welcome to join us at The Peace Tree on Snooks Hill – just off Coppins Bridge roundabout, direction towards Ryde.