Not The B Word: Everything But Brexit Debate tonight in Ryde 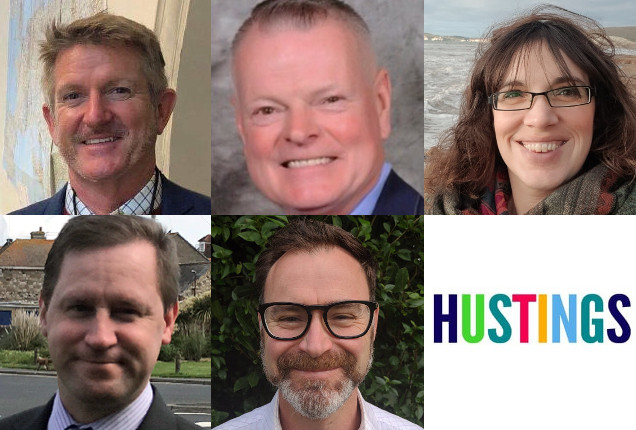 Isle of Wight General Election candidates will be taking part in another live debate this evening (Friday).

Taking part
Five of the six candidates will be taking part (Bob Seely has to attend a funeral, but it’s hoped another IW Conservative may fill his place).

The hustings will be chaired by Joe Plumb – who you might know from his Political Soapbox Show on Vectis Radio.

The candidates
In alphabetical order, those confirmed as standing in the election are as follows:

Deadlines and more information
If you are not registered to vote, it’s not too late to change that.

The last date to register as an elector and be able to vote in this election is Tuesday 26th November 2019. More information.

Postal Votes: The last date to apply for a postal vote for this election is 5pm on Tuesday 26th November 2019. More information.

Proxy Votes: The last date to apply for a proxy vote for this election is 5pm on Wednesday 4th December 2019. More information.

Find out more information about the 2019 General Election on the council’s Website.

7 Comments on "Not The B Word: Everything But Brexit Debate tonight in Ryde"

newest oldest most voted
henry
I am sorry to hear Mr Seely will be unable to attend the hustings, please may I offer my condolences. I would have liked to ask him about today’s print edition of the County Press. Mr Seely in his response to Question A2 is seeking to mislead islanders when he says ‘Deliver more money, as ‘we’ve done’ with £48 million extra investment’. £48million has NOT been delivered… Read more »
Vote Up32-1Vote Down
chartman
No doubt that the sheep will follow their leader. If only they would open their eyes and see through all the cow dung that is being thrown about. I guess Mr Seely is still straightening his bat.Is he frightened to face his public ? Does he have better things to do ?Is he so complacent that he thinks a win is a foregone conclusion ? Trouble is,… Read more »
Vote Up14-8Vote Down
henry

Well the ‘old fogies’, as you call them, won’t be old for very long if they vote the Conservatives in again, they can look forward to a short and probably pleasant life abandoned out the of political sight in their own homes, because St Mary’s won’t want them and the Council won’t want to fund their care.

Vote Up25-7Vote Down
Ian Young
Most ‘old fogies’ I know are in fact extremely tech literate, they did after all grow up with the Sinclair ZX81, the Sinclair Spectrum and early versions of Windows. They are also, in my experience, no more likely to vote Tory than any other group in society, they are in fact the very people who in the past voted for, and elected a non Tory Island council… Read more »
Vote Up15-3Vote Down
Geoff Brodie

Agreed Ian. And as I have said previously, they only knew of the Labour candidate 3 weeks ago because Julian Critchley entirely hogged the local Labour limelight for two and a half years then decided not to stand again.

A Council and NHS Trust that is so impoverished under the Conservatives it can not afford to fund an adequate supply of incontinence pads for an elderly dementia patient. What a truly dreadful state of affairs.

No wonder Mr Seely is nowhere to be seen. .