Island education has been let to slip in to such a poor position that 3/4 of children joining a secondary school on the Isle of Wight, will do so in a school that’s been judged as ‘Inadequate’. 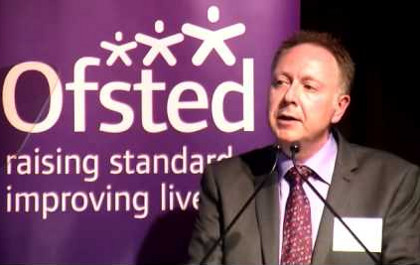 After last week’s announcement that Ofsted were going into the Isle of Wight council this week for a five-day inspection of the council’s education department – the first time this had occurred in the UK – as Ofsted had ‘serious concerns’ about the performance of the department, they offered their Regional Director for the South East, Matthew Coffey, to OnTheWight for interview.

Given the educational future of children of the Island is intimately involved with this inspection, we were more than happy to speak with him yesterday at the beginning of the inspection.

Anyone with a child or grandchild in the Island’s education system, or due to join it, should have a listen. It’s well worth the fifteen minutes.

IW education stats are “Shocking”
Matthew started by giving a brief recap on the number of inspections that Ofsted has made of Island this year and poor performance of some of these.

He’s concerned about the condition that the Island’s education has slipped into, Matthew Coffey pointed out that nearly 1/3 of Island children will be entering primary schools that are not yet ‘Good’.

“The shocking figure is that 3/4 of secondary pupils are going to go to an ‘inadequate’ school on the Isle of Wight.” he told OnTheWight, “That is simply not good enough.”

We wanted to know why he thought things had got to this dire situation.

Citing the schools’ reorganisation under the last Conservative administration at County Hall, where the Island education system shifted from three to two tier, Matthew said, “It’s fair to say that there’s been period of turbulence and turmoil within the local authority.” This had also been highlighted to him by the Headteachers of the successful schools on the Island.

School reforms to be examined
During this week’s inspection, he said his inspectors will be paying particular attention to if it the school reforms were “appropriately planned and well-executed … or not, as the case may be.”

Matthew told OnTheWight that two other central questions for investigation are – How well does the Local Authority (LA) know its schools? and How quickly does it know when its schools are in decline?

Under the previous administration it was said to OnTheWight that, as a number of the schools in increasing difficulties were academies or trusts, the IWC were unable to do much about this, as they had lost direct control over some of the schools.

“The schools being an Academy just changes the process”
Matthew challenged this, explaining that a number of options were available to bring schools back in to line, including writing to the Secretary of State seeking a warning notice to the schools (maintained schools could have a warning notice sent to them directly), the Headmaster would also be written to or the school’s governing body could be removed, introducing an interim executive board in their place.

Yes, this was within the powers of the Secretary of State.

Matthew said, at the end of this week’s inspection at the council, an open letter would be written that identifies the strengths of the Island, but also what the weaknesses are.

This letter will also be copied to the Secretary of State, “so he can decide what actions, if any, he wants to take”, he told OnTheWight.

It’s well worth listening to the full detail Matthew gives to this question in the recording below.

The headline was he said, “Two years is the maximum that we expect a school to bring around the changes that we need.”

He provided detail too, “Because of our close monitoring, we often see a school coming out of Special Measures and reported as ‘Good’ in a shorter space of time … and with the new focus that we’re placing on this framework for inspection – by being very clear about what the local authority needs to do to strengthen its support – we very much hope that we can bring around a more rapid progress.”

Listen to the discussion

This is iow Tories legacy , should be on the old Tories C.V and never forgotten .

What’s your explanation for the very poor results years before the Tories were in power ??

Will Steve Beynon Ltd be adding this OFSTED Regional Director to its ‘LINKEDin page’ and how quickly will OFSTED require it to be removed?

Would be interesting to see any professional reports on Beynon’s previous local government service’s performance.

Vote Up00Vote Down
Wendy V
I heard Cllr Chris Whitehouse talking about the Ofsted visit on IW Radio yesterday, admitting that the Council has to be able to OFFER schools something, apart from criticism. And I think that is the crux of it. There was so little encouragement and support for schools during the reorganisation. But having said that, I think the same applies for government: seems to me there’s far more… Read more »
Vote Up00Vote Down
peaceful_life
The upheaval of the shift in tier systems has undoubtedly disjointed the fluidity of things, however…until a completely solid foundation of ecological literacy, energy literacy, and economic literacy, is instilled as a basis of all our children’s cognitive processes, then we’ll continue to grasp at shadows. Had previous generations had the benefit of this ‘real world’ view, we might not be in the juxtaposition situation where, with… Read more »
Vote Up00Vote Down
'ed on a block

The state has sent in the OFSTED police to complete the rout of local authority maintained schools and Gove wants a return to 19th century bourgeois literature and chauvinistic imperialist and colonial history. That’s Tory progress I suppose.

Just a thought for all OFSTED personnel. Every school and college in Britain -that includes the Island – has been visited at least three times since OFSTED was formed. Question: Given this fact, why is there any school in Britain still failing and why are most schools on the Island still failing despite inspection? What does this say about OFSTED’s effectiveness?

How good to hear a professional, who knows what he’s talking about, express an objective view that is not clouded by political party obfuscation.
I look forward to his report and the subsequent interview (well done Simon).
I would like to hear David Pugh’s comment on the Ofsted report and see how he avoids responsibility and where he places the blame for all this.