Only one councillor didn’t support Isle of Wight Pride last night: Here’s why

After last night’s IWC near-unanimous vote to support Isle of Wight Pride, OnTheWight caught up with the only councillor who didn’t vote to support it. His arguments … lacked a little depth. 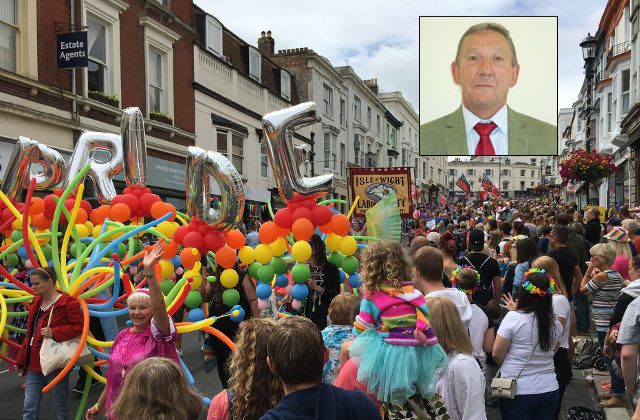 At last night’s full council meeting (catch up with our live coverage) all councillors bar one voted in favour of “re-affirming” their support for Isle of Wight Pride.

The one councillor who chose not to vote in favour of the motion – or against – was Cllr John Kilpatrick (Conservative councillor for Binstead and Fishbourne).

Kilpatrick: Abstained “because I chose to”
OnTheWight queued with other Isle of Wight reporters to speak to Cllr Kilpatrick after the meeting to find out why he abstained.

“Because I chose to.”

When asked why he chose to, he replied,

“I went to Pride this year. I’ve got no issue with Pride at all. I just chose to abstain.”

Cllr admits to not reading papers
However, Cllr Kilpatrick, who is paid £7,700 per annum for serving as a councillor, told Emily at the County Press,

Going on to admit,

“Maybe I should have read the motion in more depth, but I don’t vote for things I haven’t read properly.”

Several councillors spoke on the matter prior to the vote, giving Cllr Kilpatrick plenty of time during the meeting to read and understand the motion.

Councillors paid to read papers
All councillors receive papers for the full council meetings one week in advance to inform them of the matters to be discussed prior to the meeting.

The full council meetings are now only held every two months.

Aside from the various motions put forward from councillors, there was only one main item for debate last night (the £100m property investment). Despite that, Cllr Kilpatrick admits he’d not read the motion properly prior to or during the meeeting.

The motion
The motion Cllr Kilpatrick chose to abstain on was presented by Cllr Debbie André (Ind) and read,

This Council congratulates the organisers of the Pride Event which took place in Ryde in July this year and welcomes the support for the event shown by the Isle of Wight community.

The Isle of Wight Council pledges to support next year’s Pride Event, due to take place on 21st July 2018, and to encourage support for Diversity on the Isle of Wight.

Invitation to constituents
When we suggested his constituents might be confused to hear that he’s happy to simply abstain on voting on council business for no particular reason, he replied,

“They are welcome to come and speak to me.”

Any Islanders who want to find out more can contact Cllr Kilpatrick by emailing him on his official email address: john.kilpatrick@iow.gov.uk. In contrast to nearly all of the councillors, he does not provide a phone number.

Cllr Kilpatrick won his seat by two votes in the 2017 local election. Two votes in that ward were rejected at the count.

10 Comments on "Only one councillor didn’t support Isle of Wight Pride last night: Here’s why"

I’d rather he had a genuine ideological reason than simply hadn’t bothered to read the papers. That is what you’re there for, councillor….

Perhaps Cllr Kilpatrick was the only member who didn’t feel the need for brazen virtue signalling.
Just a thought.

Brazen virtue signalling. There’s a thought. What’s the opposite of that?

Sorry Jon. Are you trying to make a point or just pontificating? It’s hard to tell these days.

Perhaps he just didn’t want to get bullied because he didn’t support the current politically correct ideology?

Why speculate on why he didn’t vote when he’s already told you? He didn’t read the motion. As for being ‘bullied’ – what were they going to do, chase him down the corridor?

You clearly don’t understand what constitutes bullying. Don’t be silly.

I detect a hint of corporate pressure going on here! is no one allowed a free opinion any more ? or are the rest of you just too lily livered to give an honest opinion!! wether we agree or not …its called DEMOCRACY! Please don’t lose it,too many people gave their lives to protect it .

Vote Up00Vote Down
Sally Perry
You’re missing the point Molly – this is not about someone’s views, it’s about the fact that a councillor who is paid to be in that role has not bothered to read two lines of a motion from a paper he has had for a week. I hadn’t read the motion prior to the meeting either, but during the debate, when other councillors spoke on the motion,… Read more »
Vote Up00Vote Down