As we mentioned earlier, the I Love Island Milk campaign launched at the weekend. This further update from Andrew Turner’s office is just in. Ed 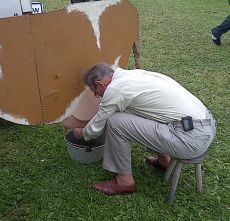 The ‘I Love Isle of Wight Milk’ campaign which was launched at the Isle of Wight Garlic Festival this weekend has welcomed the response from the public over the weekend, which organisers have described as ‘overwhelming’.

The campaign is the response from Island Dairy Farmers to being paid less than the cost of production for their milk. It is a national problem but made even worse on the Island because of increased transport costs due to the need to cross the Solent.

Over 800 signatures
On the first day of the Festival more than 250 signatures were collected for a petition calling for Island supermarkets to stock Island milk. By the end of the second day the petition stood at well over 800 names.

Justin Birch, chairman of the Island dairy farmers group, said, “At times during the day the response from the public was overwhelming – we just didn’t have enough petition boards to go round.

“We all hoped that people would support us – but to have collected over 800 signatures in two days is far more than we ever expected. Even more important than simply getting signatures was the opportunity to explain to people what is involved in dairy farming and what impact it will have on the Island if more dairy farmers go under. There are now only 15 dairy herds left – in the 1960s there were more than 300.

“We are also buoyed up by the support of our local press and so many people and organisations.”

Special thanks go to …
It is hard to single anyone out – but David Holmes, Chairman of the Garlic Festival made sure we had a great stand with only a few days notice; Harold George donated lots of Island milk so that people could taste what they are missing and the support of Andrew Turner, our MP and the NFU has been fantastic – we couldn’t have done it without them. 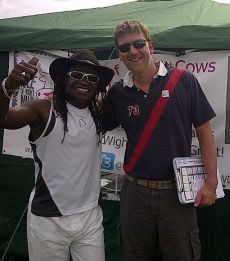 “Most of all though I want to thank the public; loads of people took our cards asking supermarkets to stock Island milk – so hopefully they will soon start landing on the desks of the supermarket buyers.

“After a visit from the Star Wars storm troopers on Saturday we had another high profile and rather less intimidating, milk-loving visitor on Sunday; popular local reggae artist Derek Sandy – he even gave us a ‘shout-out’ from the stage whilst he was performing. So many thanks to him.

“We need now to look at how the campaign moves forward – we have some great ideas so if anyone wants to get involved please let Mr Turner know on 530808.”

Mr Birch also joked, “We also borrowed Vicky the wooden cow from Briddlesford farm and lots of people had a go at milking her – including Andrew Turner. He wasn’t bad but could do with some practise so I have invited him to come along to Three Gates Farm at 3am one morning to improve his technique!”

Hard to believe that some of us pay more for bottled water than milk.

Even more unbelievable is most of our milk coming from mainland cows as IOW milk crosses the Solent for sale to them. Is this nonsense anything to do with the common market?

I’d agree with a comment in the previous article about IW milk, it does seem to go off a lot quicker than the ‘mainland’ milk that Tesco sells.

I’d willingly go back to buying IW milk again, but for some reason it just doesn’t keep and I don’t want to be running up to Tesco every other day.

Try Queenbower Dairy milk; we buy all of our milk (both raw & treated) at the weekly farmer’s market, and have found that it keeps perfectly well in the refrigerator.
Their cheeses are also good, and have just been praised by our discerning French visitors.

Knowing nothing about iow milk, can I assume that it is cheaper to buy than say Lidls milk? I can buy 4pts for around Â£1. Am I now about to have a lecture on quality and why iow costs more? Can someone clarify that I can go out this minute and buy 4pts for under Â£1………..

Maybe food going “off” is actually a good thing? Not sure about processed enyzme-free food myself…