Parents were able to find out more and share their views at last night’s school consultation meeting held at Carisbrooke College. Listen to the recording if you weren’t able to make it along. 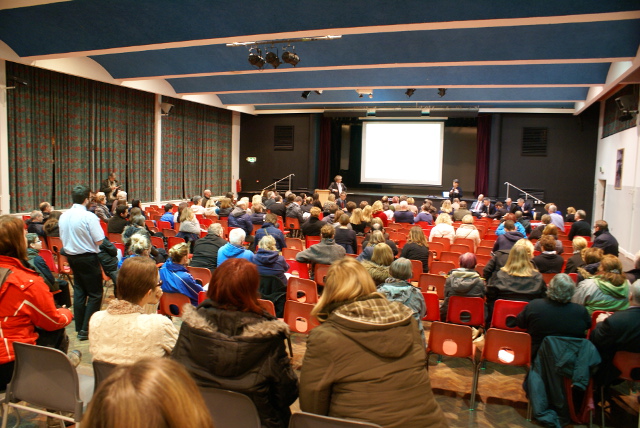 Parents and teachers gathered at Carisbrooke College last night (Tuesday) to find out more from education officers about the current consultation on school places for 11-16 and post-16 Islanders.

The meeting, which last two and a half hours, was kicked off by leader of the Isle of Wight council and Executive member responsible for Education, Cllr Jonathan Bacon.

Understand concerns
He openly admitted the error that had been made by officers compiling the statistics when they quoted that only 27% of A-Level pupils on the Island went onto university (the figure was actually 43%) and explained to parents that consultation documents were being reprinted to avoid any confusion.

He went on to say, as he has in several council meetings, his own daughter has been caught up in the school reorganisation implemented by the former council and that he completely understood parents’ frustrations and concerns.

Stressing the importance of finishing the job that was started by the previous council, he said,

“Do we stop here and say everything’s fine or do we say we’ve got unfinished business?”

Why more changes?
Felicity Roe, assistant Director for Hampshire and the Isle of Wight, who is overseeing the whole process, took the audience through a detailed slideshow explaining what’s driving the consultation (improving standards and ensuring the tens of millions of pounds promised from the Dept for Education for new buildings is spent wisely), sharing statistics on GCSE results and showing where the spare capacity is within the school system now, and mapped ahead to 2024.

She talked through the options for 11-16 school places, explaining that if a merger between Medina and Carisbrooke took place, it would only be practical on the Carisbrooke site. The Medina site is not big enough to accommodate an 11 form entry (which is what’s needed for Newport alongside Christ the King College) and the Dept for Education had already promised tens of millions to rebuild/refurbish Carisbrooke College.

Suggestions later in the meeting the prime land was planned for sale to the highest bidder were strongly refuted by Cllr Bacon.

11-16 funding subsidising A-Levels
Children’s Services officer for post 16 education, Philip Walker, went on to talk about the situation with sixth forms and A-Levels.

As reported last week, the Isle of Wight does well for those taking post-16 vocational programmes, so little attention was focused on that.

Philip explained, however, that higher than average numbers of students were taking three years to complete their sixth form programmes.

This has resulted in A-level programmes at school sixth forms being subsidised by the 11-16 year old funding, as the school only receives full funding for two years and a reduced amount in the third.

Listen to the meeting
If you were unable to attend, you can listen to an audio recording of the meeting below.

The first recording is the presentation (one hour), the second the Q&A (one and a half hours). It was good to hear many valid points being raised by parents.


Public questions
We had to boost the audio during the Q&A which can sound clumsy as there are sudden jumps between questions being asked.

Round-up of tweets
We weren’t intending to cover the meeting live, but ended up tweeting a lot of it and so have gathered those updates below for those not following it last night.

Find out more and have your say
If you have an interest in what happens to education on the Isle of Wight in the future, we’d strongly recommend you attend one of the many meetings taking place between now and 24th March.

The consultation doesn’t close until 30th April, leaving plenty of time to ensure you know all the facts before sharing your views and comments.

If you haven’t yet seen the consultation document, it can be found below (it does still contain the 27% error, so bear that in mind re A-level outcomes). Click on the full screen icon to see larger version. For more information visit the council’s Website.

newest oldest most voted
Geoff Lumley
Re. OTW tweet ‘Confirmed that Medina site would lend itself well to being a dedicated sixth form college site’ A pity they cannot also confirm that Medina could be largely left alone with Carisbrooke re-built as a mix of 4-form-entry 11-16 secondary school (which is all that is needed) AND a dedicated sixth form college (though probably something smaller than the all-Island mega sixth form they probably… Read more »
Vote Up00Vote Down
Sally Perry

From memory (will have to listen to recording to confirm) but I think it was said that four form entry at Carisbrooke was uneconomic.

Sally. Then that is a shift from what Councillors were briefed on.They seem to shift what they say to suit their plans.

My mistake – that should have been below four form entry is uneconomic.

Well said Geoff,
Still they will carry on promoting this consultation making sure that certain options are made to look most attractive. Disgusting way to open the consultation period to say the least.

The EFA meaning of 6th Form provision is in respect of 6th forms where that school has an existing 6th form on site – like those at Ryde and Sandown. The EFA/DfE have been very clear in their discussions with IWC that as things stand the PSBP funding is only there for rebuilding and refurbishing schools and not for specific 6th form college provision.

Vote Up00Vote Down
Vix Lowthion
We’re an island. We need some surplus in the system. We don’t ever want to be in a position in 5 yrs time that our secondary schools are all full and some of our children are forced to take the ferry to school every day. An extra 400 secondary age pupils in 2020 are predicted – which is an extra 3 forms a year than now. Extra… Read more »
Vote Up00Vote Down
Jonathan Bacon

Your first three paragraphs reflect some of the considerations that have been taken account of. There are others. Your last paragraph is simply wrong. The EFA funding is in no way reliant on any school closing – hence option one!

Still scratching around trying to find a “solution” which is out of Local Authority control.

There should be no closing of schools or undermining 6th forms.

Vote Up00Vote Down
Bob's Burgers
Thanks for recording the meeting. I’ve just been listening to the public questions and thought I heard David Walter from Wellow asking about forms of entry and asking about sizes at Harrow and Eton? If this is the same David Walter who stood as councillor in Shalfleet and failed to gain enough votes, I had no idea he was a parent of children in the education system… Read more »
Vote Up00Vote Down
John

I believe you have correctly identified the speaker in the front row. The question did not get the same round of applause as the first question of the session.

(I would have loved to hear Mr Lisseter’s response!)