Photos: Isle of Wight Save our NHS march

Around 200 people gathered in Newport on Saturday to show their support for the fight against cuts in the Isle of Wight NHS. 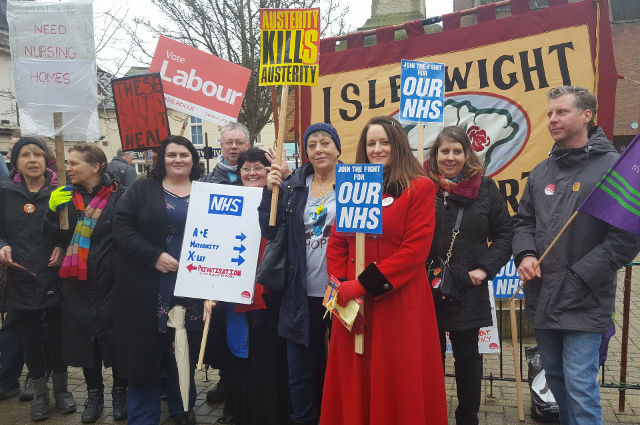 It wasn’t quite the tens of thousands that were gathered in London for the People’s Assembly march, but organisers on the Isle of Wight were very happy with the turnout for the Save our NHS march and rally on Saturday.

Despite the cold and wet weather, around 200 Islanders took part in either the march or attended the rally in Newport.

“They’ve been jumping in front of every microphone they can find to tell you two things: these cuts are not political, and they’re not about the money.

An impressive and successful show of cooperation
Christine Lightbody from the IOW Save our NHS campaign told OnTheWight,

“The day of action was a Labour Party led initiative which was supported whole-heartedly by cross party members of IOW Save Our NHS. It was an impressive and successful show of cooperation between the two groups involved in its organisation and implementation.

“We would like to emphasise that IOW Save Our NHS is totally non-partisan and is happy to work with any other political or community based group who will support the fight to save our Island based services.”

Thanks to Zoe Thompson for sharing these photos from the march and rally. Public must have a say
Highlighting the need for the public to be made aware of the planned changes, and have their say, Christine went on to say,

“Our objective is to raise public awareness of what is happening to services on the Island under the Sustainability and Transformation Plan (STP) and to ensure that the public as a whole and not just ‘stakeholder’ representative groups, who may not always reflect public opinion or concern, have some say in these decisions during the extended public consultation due to start at the end of this year.”

“One of the highlights of the event was the film screening of ‘Sell Off -The Abolition of the NHS’ which had a massive impact on viewers, many of whom were left shocked and speechless after hearing dedicated health professionals explaining what is happening in a long term plot against the NHS that has spanned two decades.

“The film is available to view free of charge on YouTube and we would urge anyone who has not seen it to do so (select the full 57 minute version).”

Find out more about the IOW Save our NHS group by visiting Facebook.